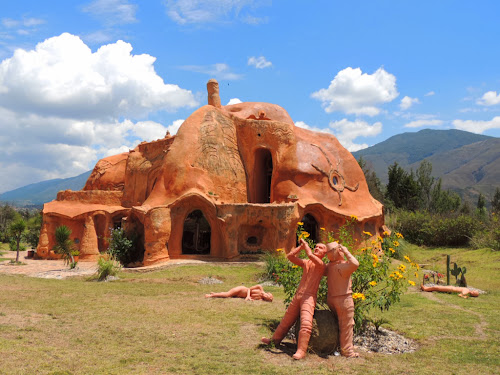 Guidebooks point visitors to Colombia to the town of Villa de Leyva, a historic colonial village, 95 miles north of Bogota, known for its fine dining, boutique hotels and huge central plaza built by the Spanish in the 16th century. The square is picture-perfect, but as I report for NBCNews.com today, there's an even more intriguing reason to come this way: Casa Terracota, or Casa Barro in Spanish, is a 5,400-square-foot Hobbit-like house made entirely of clay, a project literally cooked up by architect and owner Octavio Mendoza who calls it "the biggest piece of pottery in the world.'' 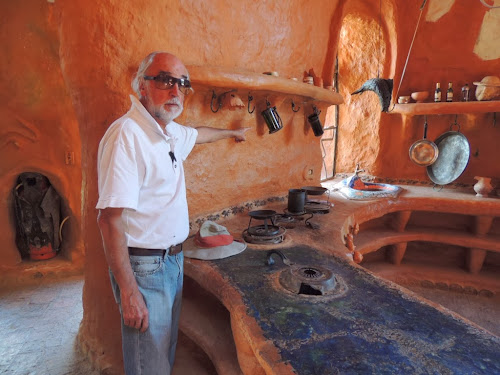 Surrounded by farmland and known to locals as "Casa de Flintstones, the house has been a 14-year project for Mendoza, 64, an artist and environmental activist who spent most of his career designing homes, commercial buildings and churches.

He lives most of the time in another house nearby, but often spends the night here as he continues work on beds, furniture, bathrooms and kitchen utensils fashioned from mud mined locally and fired in a ceramic kiln. Visitors are welcome ($3.50 for self-guided tours). His goal, he says, is to demonstrate how soil can be transformed into habitable architecture by simply using the natural resources at hand (air, water and fire). The house contains no cement, for instance, or steel. 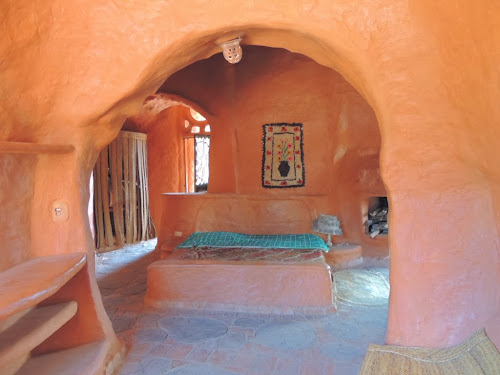 Rooms curve and flow into each other as if the house was cast in a mold and came out in one piece. Solar panels provide hot water for showers and bathroom toilets and sinks are decorated with colorful mosaic tiles. 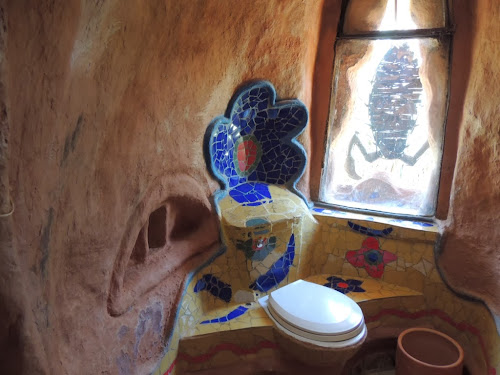 "Think of it this way," he explains on his website, "in desert places (which exist all across the planet), soil is perfect for this type of architecture... This means that for all those regions, a system like this could bring housing to millions of families.'' 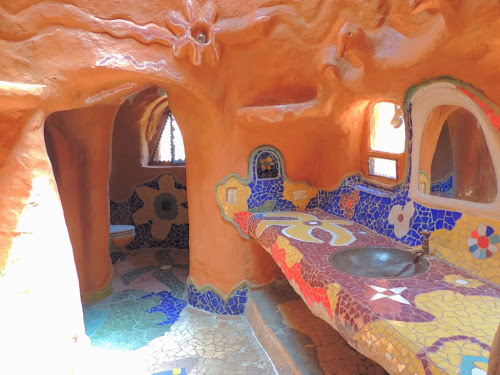 Mendoza designed confortable niches on two floors, including sinks, several showers and toilets, lounging and sleeping areas. Decorating the kitchen are beer mugs he made from recycled glass and lighting fixtures shaped like fish that he fashioned from scrap metal and tin cans. 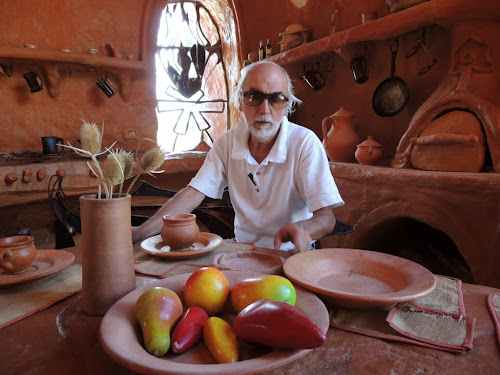 Tables are set with dishes, mugs and vases made of clay. Several windows look like big eyes. 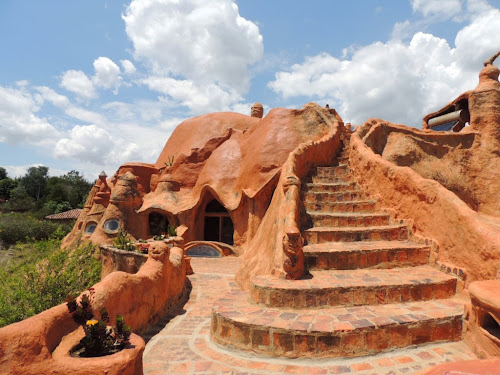 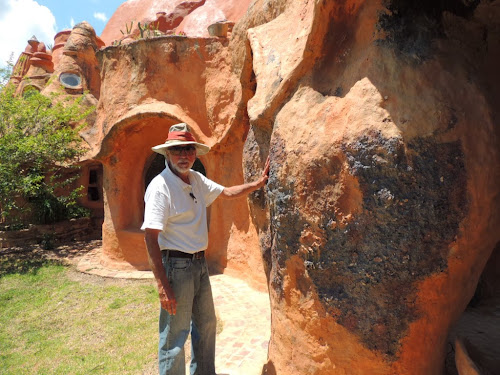 We were lucky to find him here working the day we visited. He invited us to sit around his table for a chat, and gave me a miniature replica of the house as a parting gift. When will he finish? Likely not soon. He's having too much fun. 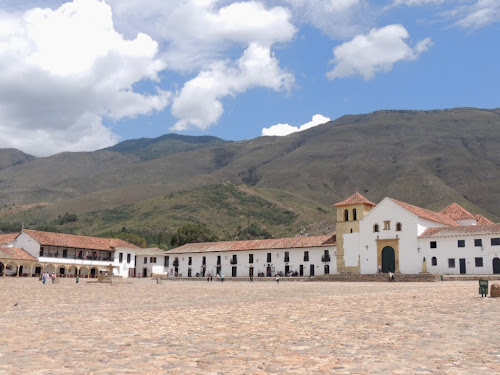 This is the cobblestone plaza in Villa de Levya that everyone comes to see. The reason it appears plain is that most of the activity goes on behind the walls of the white-washed stucco buildings. Inside are beautiful hotels, cafes, shops and in the center, a Catholic church dating to the 1600s. The cobblestones are extremely hard to walk on, so if you plan to visit, wear good shoes, and be prepared for thunderstorms which flood the streets within minutes. 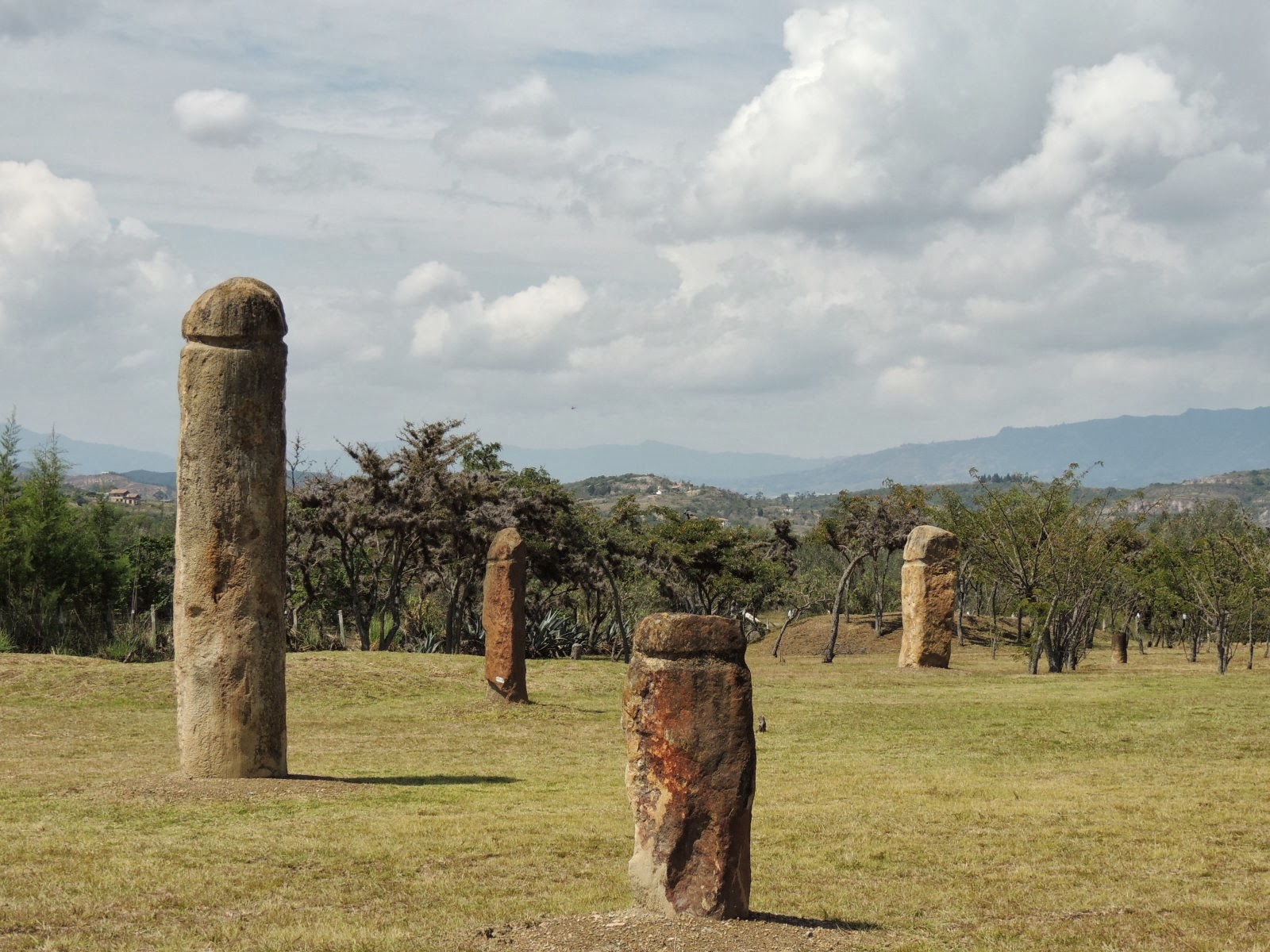 We found Villa de Levya a little sleepy for our tastes, perhaps because we visited during the week instead of on a weekend. Restaurants and shops mostly cater to tourists, although I'll admit, it was relaxing to sit at a covered cafe on the square during a thunderstorm, and sip wine and eat pizza after a  busy few days in Bogota.

There are a few other interesting sites in the surrounding area, all of which can be visited in two or three hours time by hired taxi. One of the most unusual is El Infiernito (Spanish for "Little hell"), a pre-Columbian Muisca (the indigenous ethnic group that populated this part of Colombia before the Spanish), site composed of several earthworks surrounding a setting of upright standing stones.  Sometimes referred to as "Penis Park,'' the site is believed to have served as an astronomical observatory.