Myanmar's largest city of Yangon (formerly Rangoon) rolls into one everything I love about Southeast Asia's big cities. More than Bangkok in Thailand, or Saigon or Hanoi in Vietnam, Yangon has a foot planted firmly in the third world as it moves slowly into the first. Leaving the lobby of the five-star Sule Shangrala hotel where we met a guide for a  walking tour around downtown, we ran into this parade of young Buddhist student nuns making their morning rounds for alms. Stand on any street corner, and you'll hear the sound of car horns blasting, monks chanting prayers on temple loudspeakers and vendors hawking snacks fried in sizzling oil.

Have a cup of Burmese tea laced with sweetened condensed milk while seated on a child-sized plastic stool on a broken sidewalk, or enjoy it in air conditioned comfort in a swank cafe. Browse through a bookstore filed with English-language titles, or choose from dozens of newspapers laid out for sale on street corner tables. 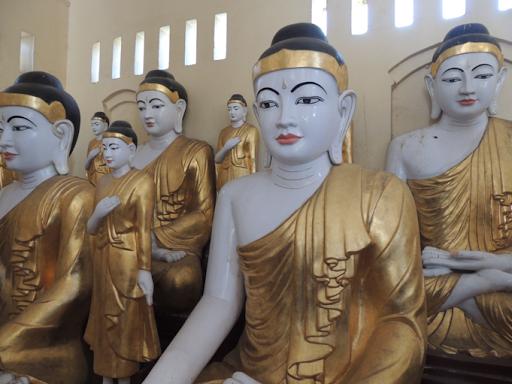 Yangon is best-known for its giant Buddha images and gilded pagodas, lighted like fields of gold at night. Impressive, yes, but a bigger reason to spend some time here before moving on to Mandalay, Bagan or other parts of the country, is to experience Yangon's vibrant street life and its gentle people, calm and unschooled so far in the art of overcharging, pick-pocketing or taking advantage of foreign travelers. 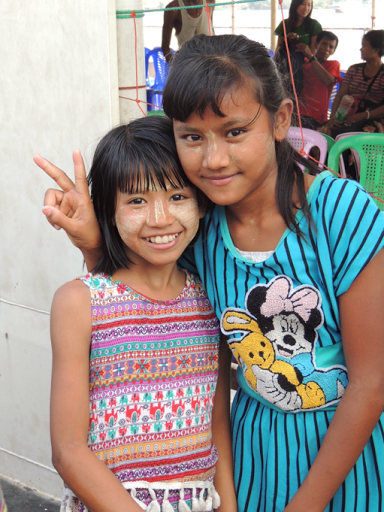 After years of being closed off under military rule, with little or no foreign investment, Internet access or freedom of speech, the country is making changes as it shifts to a civilian-style government with power shared by military leaders and pro-democracy leader Aung San Suu Kyi. Almost any guidebook information written before last year is likely to be outdated. ATMs are everywhere, so there's no longer a need to bring U.S. dollars. Most everyone accepts kyat, the local currency, although many hotels, tour guides etc. quote prices in dollar. More and more places take credit cards. The Burmese themselves use cash for most transactions, including big purchases such as homes and apartments.

Tourism is growing, but we haven't seen as many groups as I expected, at least in Yangon. There's almost no crime or safety issues, but human rights are still a concern, given the recent military crack-down on the Rohingya ethnic tribe in the northern Rakhine state.
We've met a few Brits and Australians, but no Americans so far. With U.S. economic sanctions only recently lifted by the Obama Administration, there are no Starbucks, MacDonald's or other fast-food chains.

Filling whole neighborhoods are streets lined with faded colonial architecture left over from when British controlled Myanmar (late 1880s-1948). It's possible to go anywhere in a taxi for $2 or less. A mojito at the Sky BIstro on the 20th floor of the Sakura Tower overlooking the city was $3 at happy hour. Dinner with drinks at the stylish Rangoon Tea House was around $17 for two. Our room at the Lotus B&B was $40 a night with breakfast and private bath (shower and toilet in one room with no curtain to separate them).


Burmese-born guide Michael Lin, 49, introduced us to some of the cultural aspects of life in Yangon during a four-hour walk with Yangon Walking Tours our first day in town. The oldest of six children, he grew up with a mother who opposed the military rulers who staged a coup 12 years after Myanmar (then Burma) gained independence from British. Lin's mother wanted to leave Burma, but his father supported the new government, and wanted to stay. His mother died before they could leave, so Lin stayed, graduated from university and now, like thousands of locals, makes his living as an entrepreneur, acting as a freelance tour guide, dabbling in real estate and operating a gaming business. Real estate prices have soared (one report put prices per square foot higher in downtown Yangon than in Manhattan) as investors look for new places to park their cash. 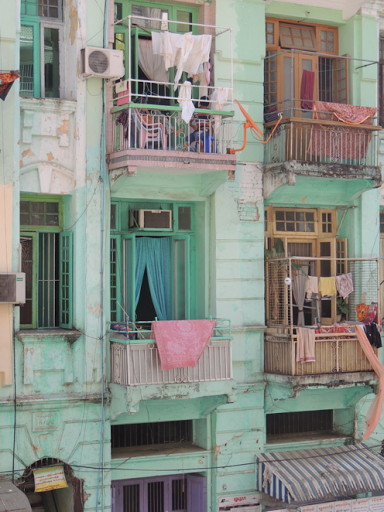 Our first day wandering around Yangon yielded interesting peeks into Burmese life. Almost everything is sold in the open air, either from small, walk-in store fronts or carts set up by sidewalk vendors. New rules require food vendors in some areas to move into city-controlled food courts, a move many are resisting because they don't want to pay the fees, or lose the freedom to move around. Below are quail eggs, a popular snack we found on a street food walking tour with James Brown, 29, a part-time youth minister for a Baptist church. 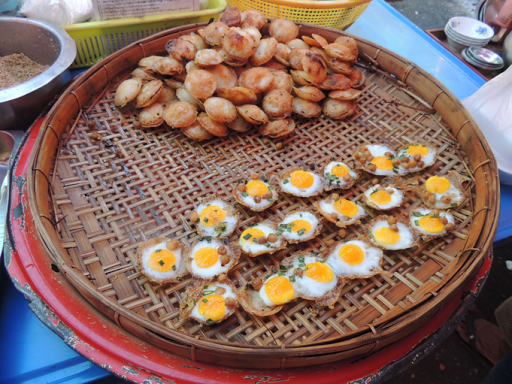 Many men and women enter a Buddhist monastery for some period in their lives, often to get an education. The girls below are young Buddhist nuns, out with their begging bowls which passersby fill with rice, snacks or money. 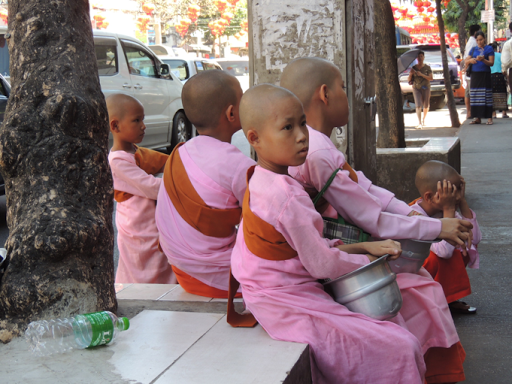 Nearly every woman and a few men wear Thanaka cream on their faces. It's both a cosmetic and sun block. The cream comes from a tree bark that's shaved and mixed with water into a paste. 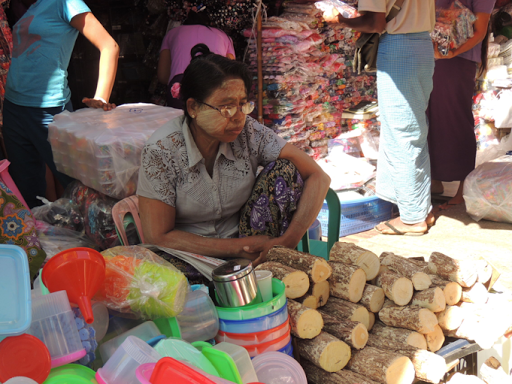 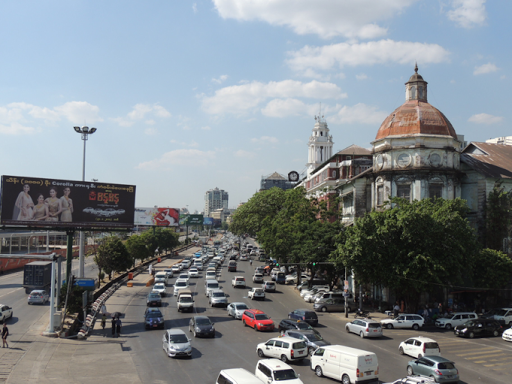 Streets jammed with cars, pedestrians and sidewalk vendors give way to rural life within a few minutes train or ferry ride from the city. Tourists can take the "Circle" train, a commuter train that calls at 39 stations in three hours, for the local fare of 15 cents. 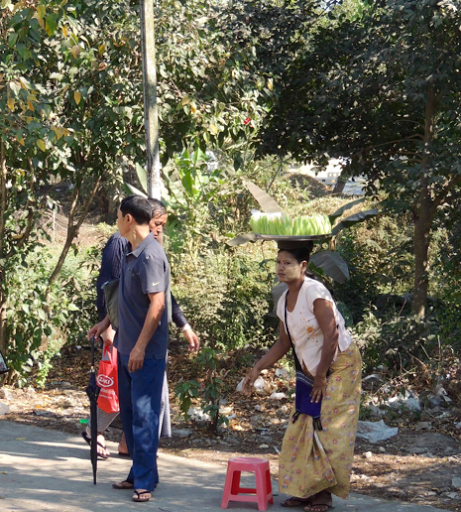 A 10-minute ferry ride to the rural village of Dala , on the other hand, costs foreigners $3, but comes with a free bottle of water, and special plastic chairs labeled "foreigners only."  We preferred just to sit with the locals on bench seats, and enjoy the breeze. 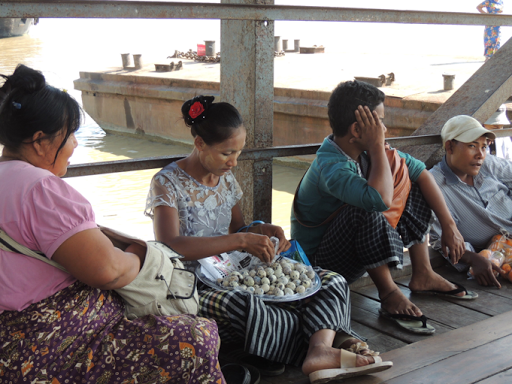 Burmese temples are known for their oversized Buddha images. Visible from all over the city is the Schwedagon Pagoda, Myanmar's most sacred Buddhist shrine. The centerpiece is a 325-foot-high stupa, gilded from the metal of 22,000 gold bars, and believed to enclose the relics of four Buddhas. Rules require all visitors to walk though pagodas barefoot. Shoes and socks must be checked at the door with an attendant, or you're free to carry them around in a bag. The floors are either marble or covered with soft linoleum or carpeting, so even on hot days, walking barefoot isn't too bad. 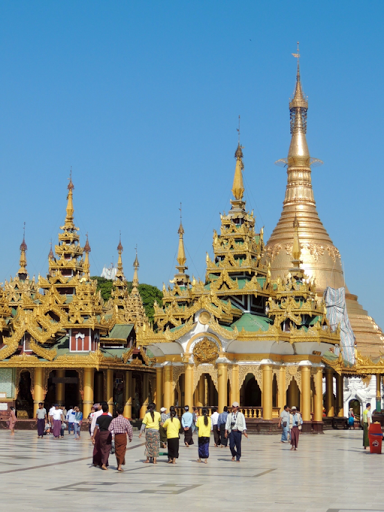 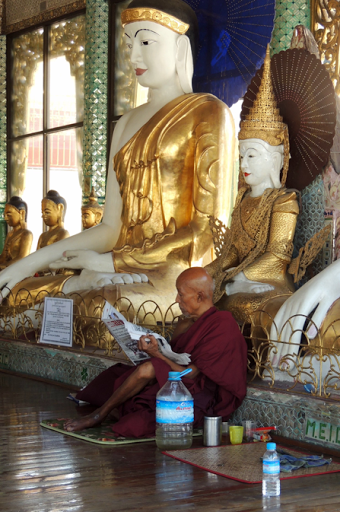 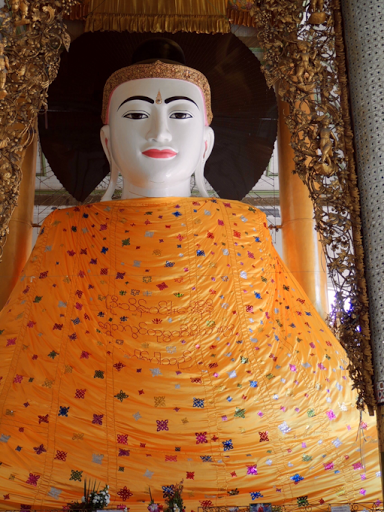 There are numerious shrines within Schwedagon where visitors can sit and pray, light insense, sleep, read the newspaper, or offer gifts such as bottles of water or oranges. 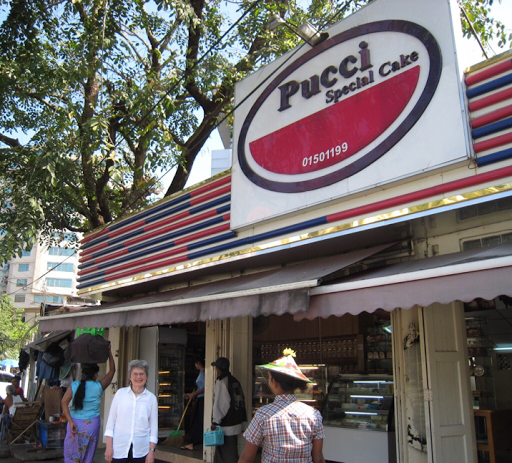 I alwasys wanted to own by own bakery, but someone in Yangon beat me to it. A friend told me about this place, so we found it on the map and asked a taxi driver to take us.  I bought several items just because they came in bags labeled Pucci Special Cake. 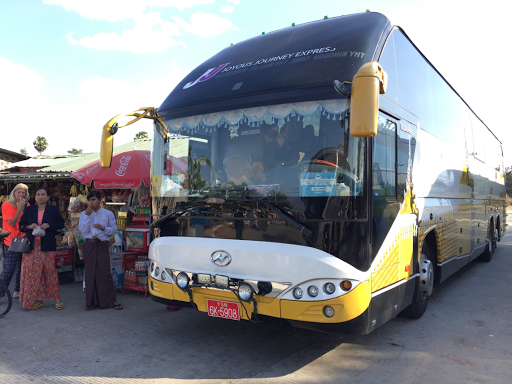 As I write this, we're on our way to Mandalay on the Joyous Journey Express, a first-class, air-conditioned bus with comfortable seats, snacks, tea and just a few other people on board. The ticket was $19 for a nine-hour journey. The bus company apparently has a Christian affiliation. Written on the side of the bus are the words "The Way, the Truth and the Life,: and on the front, "Thy Kingdom Come. Thy Will be Done in Earth as in Heaven."

That's what I love about Asia travel - always a surprise!