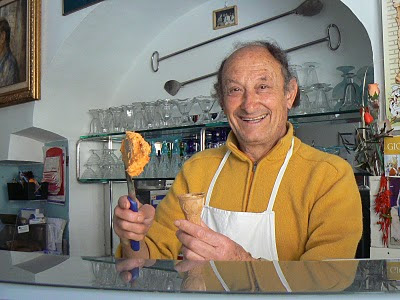 Here's a spot in Southern Italy Rick Steves hasn't discovered (Or if he has, he's not telling anyone).
Everyone knows about the the Cinque Terre, the five cliff-hugging villages along the Northern Italian coast. European jet-setters camp out in villas on the island of Capri. Tour groups favor Sorrento and the beaches of Positano along the Amalfi coast. But few Americans know about the Calabrian seaside town of Tropea, six hours by train south of Rome.
Sun-seeking Italian, British and German tourists come by the droves in summer. But offseason, being here can feel like wandering into a party waiting to happen.
Here's my recommendation: Stop here on your way down the coast between Rome and Sicily. Book a room (about $50 per person) in the Casa del Sole, a four-room B&B run by the energetic Eugenia Castellaneta, 40, who moved to Tropea from her hometown of Bari in Puglia a few years ago. Then go find a sample of the town treat -  almost anything made from the "Cipolla di Tropea," a sweet, red onion shaped like a miniature football that grows in the surrounding countryside. Shops sell onion jam and pasta, and as we found out when we stopped into Gelati Tonino, even onion ice cream.
The inventor is Antonio La Tore (Tonino) who makes 60 flavors of gelato in the shop he's owned  for 40 years. The most popular is onion, which he makes once a week and serves on Sundays, but he's also come up with flavors that mimic other Calabrian specialties such as pesto, figs and pine nuts. He convinced me to try his hot salami gelato with a hint of smoke and spice. I'm not sure salami was meant to be eaten cold, creamy and sweet, but when he posed for a photo holding up a big orange glop on a wooden scoop, he smiled like proud father, and I loved him for giving the idea a try.
Click here to read more on Tropea.