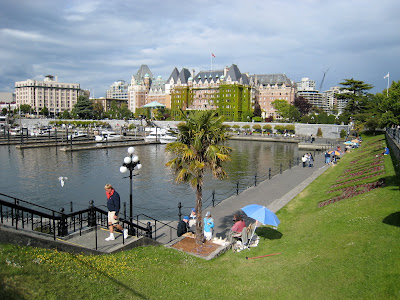 Vancouver and Vancouver Island were the "It'' destinations last year during the run-up to the 2010 Olympic Games. This means that THIS year is the perfect time to go to avoid crowds, higher prices and all that goes with being on the tourist trail.


I've spent many a three-day weekend exploring the island. No matter how many times I go, I always find something new.


If you haven't detoured off the highway between Sidney and Victoria, do this the next time you're on the island and discover the culinary delights of the Saanich Peninsula. 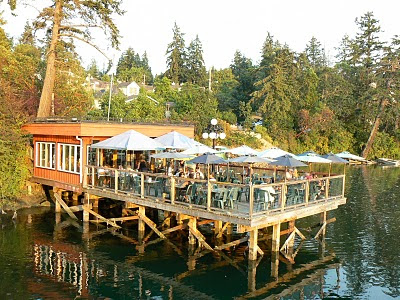 
DINE AL FRESCO ON THE EMPRESS VERANDA
On April 30, 2010, the Fairmont Empress Hotel opens its veranda to visitors with bistro-style dining (no reservations) daily from 11:30 a.m.- 5 p.m for beverages or a light meal, through September. I personally am not a fan of the Empress high tea experience (to crowded, too expensive), but this sounds like a winner. Another of my favorite spots,  especially in rainy weather, is the Bengal lounge.
CELEBRATING MOTHER'S ONE GARDEN AT A TIME
The Victoria Conservatory of Music offers garden-loving mothers a self-guided Mother’s Day Garden Tour. May 8 and 9, 10 a.m.-4 p.m. Visitors will be treated to a plant sale and entertainment by students from the Victoria Conservatory of Music. Passes are $25, available by calling the Victoria Conservatory of Music at 1-866-386-5311.
ONE-PERSON THEATER


This sounds like it might be worth a special trip. The Uno Fest, Canada's oldest festival dedicated to one-person theater, will be held in Victoria May 20-30. Uno offers live comedy, drama, and dance from around the world. The 2010 line-up includes Chris Gibbs, Toronto singer and filmmaker Bob Wiseman, and American actor and comedian Kahil Ashanti. More than 20 shows to choose from at the Metro Studio and the Intrepid Theatre Club. Tickets start at $17.
TEA TIME (AND COFFEE TOO)
Venus Sophia Tea Room is a new space in Chinatown. I haven't been here, but from the description, it sounds like fun. Filled with overstuffed floral cushions and bicycles with flower baskets mounted overhead, Venus Sophia is described as "an elegant space pouring teas from China, India, Japan, Sri Lanka and its own Venus Sophia black, green, white and herbal organic varieties.''
There's also coffee and a selection of raw foods, baked goods, homemade soups etc. Venus Sophia also specializes in red espresso, a rooibos tea specially made for use in espresso machines, and known as a healthy hybrid between tea and coffee.
Posted by Carol Pucci at 6:29 PM