Attention Foodies: Three trips you can do in a day from Seattle 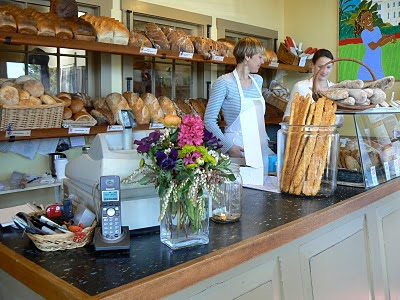 Are you a foodie? Then you're going to love some of the day trips we've designed for Seattle people (or those who happen to be visiting Seattle) looking for things to do on the Olympic Peninsula. I've done three recently for The Seattle Times - all within a scenic half-hour ferry ride from Seattle to Bainbridge Island, then a hour's drive across the even more scenic Agate Pass and Hood Canal bridges.


Historic Port Townsend is a good place to start. Go on a Saturday and hit one of the best farmers markets around in what the locals call "Uptown.''  It's a short drive or walk up from the tourist shops and restaurants on the waterfront. Above is a bakery to die for. Pan D'Amore sells killer breads. A friend makes the trip just to pick up one of their loaves of rye. The long sticks in the jar? Cheese sticks. Hang around here long enough and you'll several people walking down the street munching on one. Tom and I drove over this weekend and had breakfast at Sweet Laurette's around the corner before spending an hour or so strolling through the market. Click here for a plan. 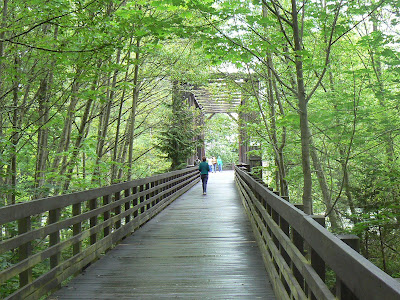 Next up: Sequim, a few miles from Port Townsend, popular this time of year for its lavender fields in bloom. Sequim too has a farmers market, but the crafts here are more interesting than the food.  Sequim is in the "rain shadow'' of the Olympic Mountains and gets more sun than Seattle, so it's a popular retirement community. Some of the retirees have come up with some creative ways to turn former hobbies into businesses.


If you're a biker, Railroad Bridge Park is nearby. And if you're a hiker, you'll want to get to the Dungeness Spit. Whatever you do, don't miss breakfast at the Oak Table Cafe. If you decide to spend the night, the lodging of choice is the Red Caboose Getaway, near the Purple Haze lavender farm. Guests sleep in private, refurbished railroad cabooses parked roundhouse style on "tracks" surrounding a lake. Sequim interests a lot of people. Our "Do it in a Day'' story was the Seattle Times' No. 1 most e-mailed story last week. Here are all the details.


Finally there's Chimacum. It's actually the closest if you're coming from Seattle. Chimacum is an amazing little rural community of entrepreneurial, organic farmers growing everything and making artisanal cider, cheese and bread, all of which you can buy directly from the farms, or at the Port Townsend farmers' market and the Chimacum Sunday farmers' market.


Take a drive here, and go from farm stand to farm stand, filling up a cooler, or drop into one of the cideries for a tasting. We went on Saturday to help Finn River Cidery celebrate the grand opening of its tasting room. Finn River is owned by an energetic young couple who took over a long-time blueberry farm. They've got some interesting plans designed to bring people out and experience farm life first-hand.  Click here for all the details.


Whatever you do, leave time on your way back to stop at Mora Iced Creamery on Bainbridge in Winslow near the ferry dock. The Argentinian owners make unique flavors with local and seasonal ingredients. There are 70 in all including goat cheese with fig, lemon bar, rose petal and eight different kind of chocolate. Bainbridge Island is home the the wild blackberry (in season in August). Mora means blackberry in Spanish.


Believe me, this place is worth the ferry ride all by itself.