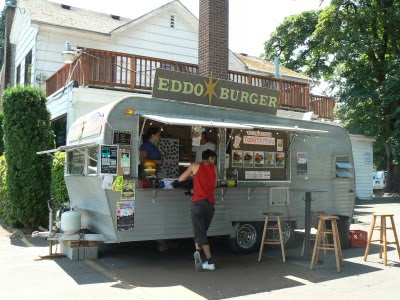 I've lived in Seattle for 30 years, but had never made it to Eugene, Oregon until a few weeks ago. Now I'm ready to go back. This is a cool, earth-friendly college town, with some great breweries and vegan/vegetarian restaurants. Above is Eddo Burger in the artsy Whiteaker district where burgers made from the owner's recipe of black beans, brown rice and quinoa are $5. I hadn't intended to write a story about the Whiteaker, but after finding so much to explore, I decided I had to. Follow this link in this Sunday's Seattle Times travel section to learn more.  Check in later next month for the story I did go there to write -- Using a 12-mile bike/pedestrian path around the Willamette River to explore the town.


Getting to Eugene is easy on Amtrak. The Cascades train travels from here to Portland, then Amtrak has a first-class bus that meets the train and continues on to Eugene. The whole trip took about 5.5 hours.


"A lot of people when they hear about the bus, think to themselves 'Greyhound,' and don't want to do that,'' our driver observed.


Trust me, this bus was NICE. I would have gladly taken it again, but the connections are a bit different going the other direction. We were able to take the train (with a change in Portland) all the way back to Seattle.


With passenger complaints against U.S. airlines soaring, the government has categories for logging problems with delays, missed connections, lost baggage, even the treatment of pets.
Nowhere is there a category for air rage.
There should be, says Kate Hanni, the leader of FlyersRights.org, a national airline passenger-rights group.
"Things have reached the tipping point," says Hanni. "It's truly trench warfare out there for both passengers and flight attendants."
What brought things to the point where JetBlue flight attendant Steven Slater — after cursing out a passenger over the plane's intercom and exiting down an emergency-evacuation chute — became a national folk hero?
"People are just fed up on a whole bunch of levels. Everyone of us would like to take their job and shove it at some point in time," Hanni says.
Pile on the hassles of summer travel — longer security lines, rising airfares, crowded planes, fees for everything from checking a bag to changing a reservation, and airline staffing levels at near 20-year lows — and it's not surprising that legions of fliers have flooded websites with complaints about air travel.
Read more here, plus comments from Seattle Times readers.

Credit card fees
I've written a lot over the years about the fees international travelers pay when using their credit, debit and ATM cards overseas. Things aren't getting any better, and in fact, could get worse as the banks look for new ways to raise fee income to make up for revenue likely to be lost due to the new financial regulations that reins them in in such areas as automatically "providing'' overdraft protection, and then charging a fee for it.
More than 90 percent of bank cards and nearly 60 percent of credit union cards are now larded with currency fees, according to a new report by the Pew Trusts. The median fees? Three percent for bank cards, Pew says.
The best way to avoid foreign currency transaction fees? Use a credit, debit and ATM card provided by a credit union (most charge a maximum of 1 percent on overseas transactions), or better yet, use a card issued by Schwab, if you're a customer, or Capital One. Neither impose ANY foreign currency fees.
For more about this issue, and some new alternatives that might be available soon, see Joe Brancatelli's recent column for Portfolio.com.
Posted by Carol Pucci at 5:09 PM