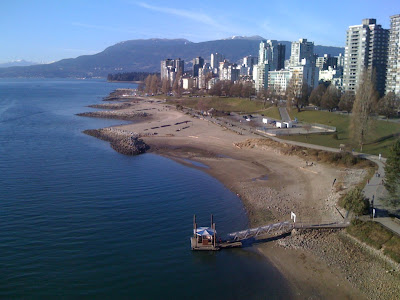 View of Vancouver's English Bay from the Burrard Street Bridge.

Half-price train tickets. Free food. A swanky hotel for $85 per night. How could this be? Everyone knows Canada's no longer a bargain for U.S. travelers. With the dollar and the loonie - Canada's one dollar coin - now worth about the same, it's easy to feel sticker shock on everything from museum entrances to eating out.

All the more reason to squeeze in a last-minute getaway to Vancouver before tourist season. An $80-$85 bid on Priceline.com for a four-star hotel this time of year almost always wins us a room at the Hyatt. I love small hotels and B and Bs, but, for this price, especially if we're traveling without a car, we like the Hyatt because it's next door to the Burrard Street station, handy for the SkyTrain, Vancouver's light rail, and many buses.

We traveled on Amtrak with two-for-one coupons (snagged last December during a promotion at PCC stores in Seattle), then happily ate breakfast for free in the bistro car, using $10 coupons Amtrak Cascades is making available through March 18. Tip: Print these out on the website before you go, or prepare to hunt around for a place to print them in Vancouver. One disadvantage of staying in a hotel such as the Hyatt is that it charges high prices for everything. Bottled water in the room was $5. Parking was $37 per day. Using the business center to print out two Bistro Bucks coupons would have cost us $7, so we went to a copy center downtown and paid $1.

Train food isn't what it used to be. I was impressed. We bought quiche and smoked salmon on the way up, and salads from Seattle's Gretchen's Shoebox Express on the way back.

I learned long ago that getting anywhere in Vancouver is easy without a car. The city has an an excellent public transportation system. We bought a $9 all-day transit pass at the SkyTrain station across from the Amtrak station, then used it to get to our hotel, and everywhere else, including Stanley Park, the Kitsilano neighborhood (for dinner at the Naam), even Richmond, Vancouver's little Hong Kong, the site of many of last year's Olympic events. 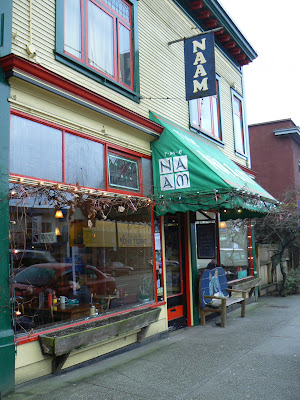 On a clear day, though, there's no better way to explore Vancouver than on foot. We bundled up, and walked along the seawall that skirts English Bay to Granville Island over the Burrard Street bridge. It's possible to get to the island on little ferries, but walking across the bridge affords some unique city views. We happened to be in town for Granville Island's annual Winterruption Festival which meant there were some unique views from under the Granville Bridge as well. 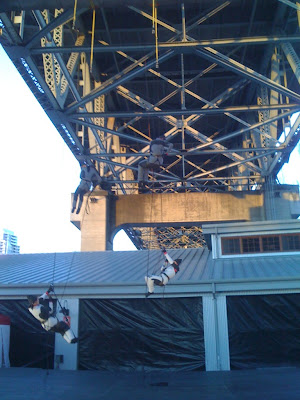 Acrobats performing under the Granville Bridge during Winterruption

The Granville Island Public Market caters more to tourists than locals, but the crafts and gourmet treats are aways high-quality. We like to bring back fresh pasta from Duso's Italian Foods. It's always a hard choice, but this time we settled on three types of ravioli, one with sweet potato, another filled with asparagus and a third with feta and sun dried tomatoes. Dinner-sized portions for two cost about $5 each.

A snowy Sunday morning made for a very cozy breakfast at the Acacia Fillo Bar and Cafe on Denman, a few blocks from Robson. This is a little Bulgarian spot that gets rave reviews on Urban Spoon. We went twice, and next time, we'll go back for dinner. Below is their speciality - the Banitza - an Eastern European riff on a quiche, made with layers of fillo instead of dough, and stuffed with feta and spinach. This alone was worth the trip! 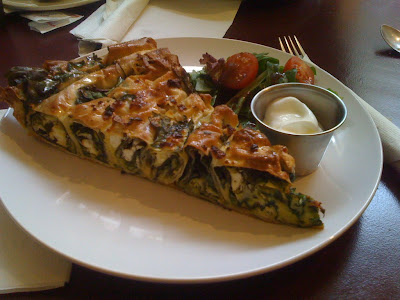