Cannon Beach via a stop in Bosnia 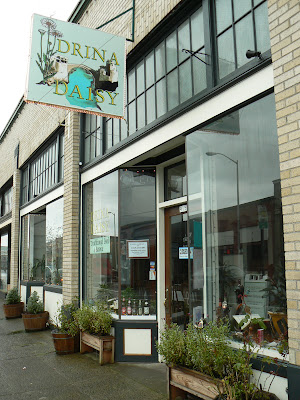 Many people who read my recent Seattle Times story on Cannon Beach on the Oregon Coast asked why we "always write about Cannon Beach'' when there are so many other nice places to visit that are far less crowded and expensive. I have the answer, but let me digress for just a minute to mention the Drina Daisy, pictured above, in Astoria, OR., just across the border from Washington State. No matter what your destination on the Oregon Coast, Astoria is worth a stop, and so is the Drina Daisy which I discovered in 2007 after a recent trip to Sarajevo.


The restaurant scene in Astoria is much improved from that time when it was mostly routine steaks and seafood at prices that seemed high for a small town.  I had to pull over when I spotted the words "Traditional Food of Bosnia" stenciled on the window of a plant-filled restaurant on Commercial Street.
Vancouver, Wash., residents Ken Bendickson, and his wife, Fordinka Kanlic, opened Drina Daisy in 2006 to showcase the Mediterranean-style "comfort food" she cooked for 25 years at a restaurant she owned near Sarajevo in the former Yugoslavia.
Nearly everything on her menu brought back memories from my trip to Bosnia. There was a burek, a pocket of phyllo pastry folded and baked around cinnamon-laced ground beef and topped with sour cream; cherry wine made in neighboring Croatia; and the familiar ajvar, a purée of roasted red bell peppers.
I was happy to find the Drina Daisy still in business when I stopped in Astoria in September on my way to Cannon Beach. Fordinka is still in the kitchen and Ken is out front, waiting on tables. Stop by and say "hi'' the next time you're in the area.
Now, back to Cannon Beach. The town has a beautiful setting on the coast, but it's way too crowded in the summer, and not really a good value, considering the high room rates and lack of restaurants worth the prices.
This time of the year, it's a completely different story. Room rates fall, the crowds disappear and the sunsets at Haystack rock are spectacular. Tide-pool viewing should be especially good this winter after high waves wash away a heavy load of sand that piled up in summer. Best of all, there's a cluster of fairly new, good-value restaurants in Midtown, between downtown and Tolovana. Like some of you, I too felt a little jaded about Cannon Beach, but off-season, I quickly found new reasons to spend time here. Read the full story here.
Fall and winter, by the way, a great times to find deals in Portland and Vancouver, B.C.
Priceline's "Name your own price" bidding system for deep discounts on hotel rooms works well in both cities. I recently bid $90 for a four-star hotel in downtown Vancouver and snagged a room at the lux Sheraton Vancouver Wall Centre, for $108, including taxes and fees and free Wi-Fi vs. $178 on Expedia and $176 on the Sheraton's website. Can't wait to try out the heated indoor pool. Click here to read my recent Travel Wise column in the Seattle Times for more tips.
Posted by Carol Pucci at 7:53 AM