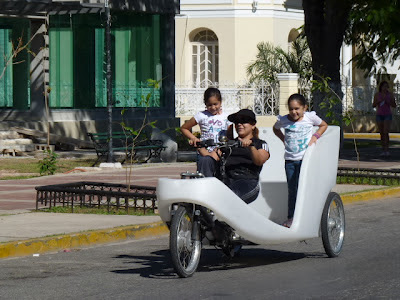 Merida, Mexico - A man in a white tank top, black drawstring shorts and flip flops drags a beat-up bike from the front room of an abandoned house on a wide boulevard lined with mansions.

For 30 pesos, less than $3, the rusted, one-speed "Cherry"-brand bike is mine for the next two hours.
I pedal along the Paseo Montejo, passing pastel-colored mansions, once the homes of wealthy plantation owners, now the headquarters for banks, insurance companies and car dealerships.
A group of children play a game of Twister on the sidewalk. Others join an impromptu art class, dipping their fingers into jars of paint set out on card tables in the street.
A girl cruises by in high-top pink tennis shoes with a matching pink tricycle. Then comes a mother and her two daughters on a white three-wheeler the size of a washing machine.
Along the "Bici-ruta" (bicycle route), three miles of city streets closed to auto traffic on Sunday morning, no one wears spandex. No one owns a fancy racing bike. No one bothers with a helmet. 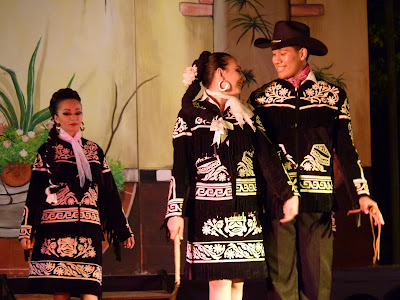 Weekends are family time in Mexico, and no city seems to celebrate them with more gusto than the Yucatán's capital of Mérida.
Free musical and folk-dance performances take place around town nearly every night, but the whole city, it seems, turns out for an all-day street carnival called "Mérida en Domingo," — Mérida on Sunday.

The party gets a jump start on Saturday night with musical performances in several locations, then builds to a crescendo on Sunday with dancing in the Parque Santa Lucia and the region's largest Mayan handicraft market on the Plaza Grande, the site of the ancient Mayan city of T'ho.
It's all free, and as with any good party, everyone's invited. Some highlights:
• Noche Mexicana: Local dance groups perform and craft and food vendors set up stalls Saturday nights in a park at the top of the Paseo de Montejo. Named for the Spanish conquistador Francisco de Montejo, who founded Mérida in 1542, the boulevard is sometimes called Mérida's "Champs-Élysées" because of its wealth of 19th-century buildings such as Palacio Cantón, home to the Anthropology & History Museum.
I found a table on the patio of the Tala Bistro in the Hotel Casa San Angel, the former home of a well-known mathematician, now an antique-filled boutique inn. On the menu was a Yucatán specialty, Sopa de lima (lime soup), and fajitas made with hormone-free beef. Locals gathered around red plastic Coca-Cola tables for cold drinks made with rice milk and tacos filled with shaved pork cooked to order by the street vendors.
The concerts are free, and there are plenty of folding chairs, but arriving early is essential. It was standing-room only by the time the costumed dancers took to the stage at 9 p.m.
• Corazón de la Mérida: "In the Heart of Merida" is another Saturday-night celebration, this one on Calle 60, a narrow main drag, and the side streets surrounding Plaza Grande in the 470-year-old city's historic center. Towering above the shade trees is the 16th-century Cathedral de San Ildefonso, built by the Spaniards with stones from Mayan pyramids.
I watched a lone man sitting on the curb playing a saw as if it were a violin, then peeked in at a classical-guitar concert in the Teatro Peón Contreas, a hall that could be mistaken for a museum with its marble staircase and frescos by Italian artists. 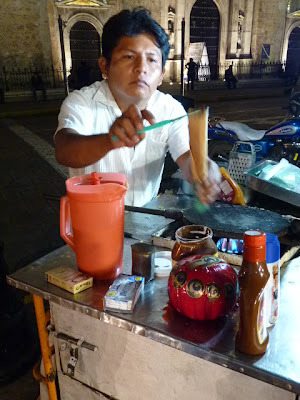 Vendors came by with caramel apples and pink and yellow cotton candy on a stick. A clown kept the crowd entertained with a dance routine that called for the audience to mimic his and a partner's moves. "Dancing with the Stars" it was not, but still lots of fun.

• Mérida en Domingo: The all-day festivities begin at 8 a.m. when the streets along the Bici-ruta close to traffic, then continue through the afternoon and evening with musical, comedy and dance performances at various locations. 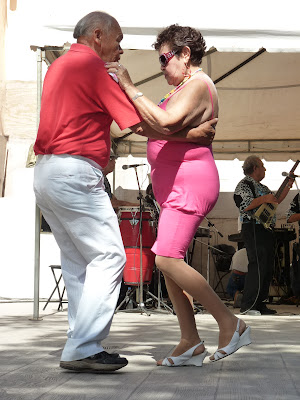 I was in awe of this woman in a tight, pink dress, red-sequined sunglasses and white sandals staying cool in the 90-degree heat while dancing with her partner for nearly an hour on a bandstand in the cozy Parque Santa Lucia, once a stagecoach stop, now the site of a weekly antiques and crafts market.
People-watching is best from the terrace of La Dulcera Colón, a century-old ice-cream parlor across from the Plaza Grande. The air smells of roasted corn, vanilla milkshakes and grilled pork. Women from the nearby Mayan villages stroll shaded walkways with handwoven blankets and scarves draped over their arms, hoping to convince tourists to lighten their loads.
Most afternoons folk dancers in crisp white shirts and colorful dresses take to the streets for traditional dances performed in village fiestas called vaquerias. 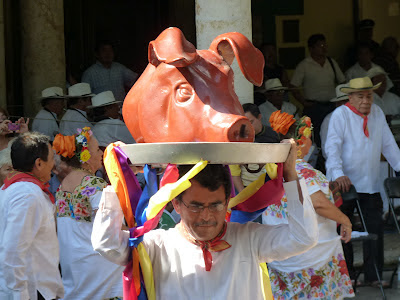 Linger long enough and you might get lucky as I did and see a troupe doing "La Danza de la Cabezade Cochino," the dance of the pig's head, a traditional ceremonial dance in which the head of a barbecued pig (made of plaster these days) is passed around on a platter balanced on the heads of the male dancers.


Note: The U.S. State Department has issued an extensive new travel warning about safety in Mexico. The report is the most detailed the U.S. has published to date on the effects of drug-related violence. It's fortunate for anyone thinking of visiting the Yucatan that Merida is on the list of many cities where tourists can expect to travel safely.
Posted by Carol Pucci at 3:48 PM