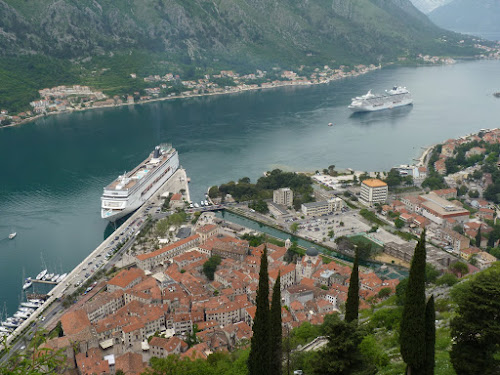 Getting to Kotor in Montenegro from Naples in Italy involved eight different trips on various forms of public transportation, starting with a subway to the train station in Naples, and ending with a bus from the port city of Bar in Montenegro. At times, I wondered if it was all worth it, but the above picture says it all: Little Kotor, a medieval walled city on a protected bay surrounded by mountains, is a destination worth the journey. 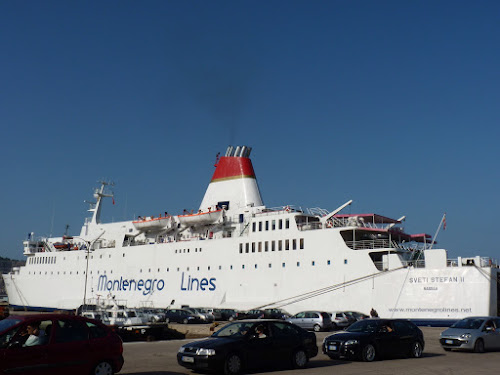 Ours' started with an overnight ferry ride on the Sveti Stefan II, a car and passneger ferry, that leaves the port of Bari in Italy each night at 11 p.m., arriving in Bar at 9 a.m. the next morning. All was going well until we arrived in Bari on the train from Naples, caught a bus to the port and could find no place to check-in. We showed our reservation info to some men hanging out at a bar, and they pointed us to a stop for a shuttle bus that Montenegro lines uses to take passengers to its offices, about a mile away. Everyone got in a line to show passports and get tickets before reboarding the shuttle bus back to the port. Things moved slowly even though there were only a few of us waiting. One passenger took it as an opportunity to start yelling and screaming a the desk clerk. There was much pushing and shoving, but we stayed out of whatever trouble was going on and instead struck up a conversation with a Russian woman who had come to Italy to shop, and returning back to their vacation home. She and her family, and apparently many of her friends, own property in Montenegro, a bit like one of us finding a bargain on a condo in Florida or Palm Springs. 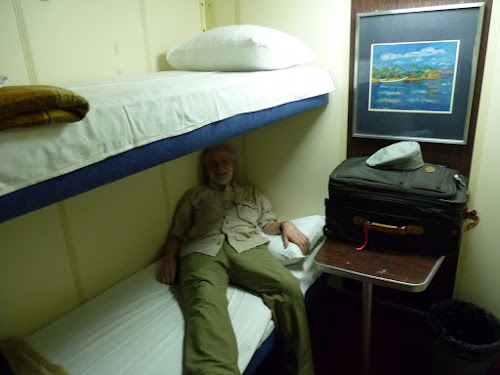 Just to recap, the Balkans are the countries that made up the former Yugoslavia in Southeastern Europe. The Balkans in Turkish means "mountains.'' For the most part, this is mountainous land, fragmented both in geography and politics, with most of the population divided into ethnic groups based on religion - Orthodox Christianity, Catholic Christianity, Judaism and European-style Islam, inherited from the long occupation of the Ottoman Turks.
Wars in the 1990s over who was to control what territory following the break-up of Yugoslavia took their toll on cities and people. The fighting is over and the area is safe. Ethnic tensions still exist, but for the average traveler it's the post-Communism entrepreneurial spirit that's most noticeable, and in my opinion, this is what makes the Balkans such a fascinating and fun place to visit.
We'd been traveling since around noon by the time we boarded the boat at 8 p.m. Passengers walk on along with the trucks and cars, then follow signs to "reception'' where attendants hand out keys to the rooms. Above is a picture of Tom in is our room. No complaints (I drew the top bunk), but needless to say, we didn't get much sleep. 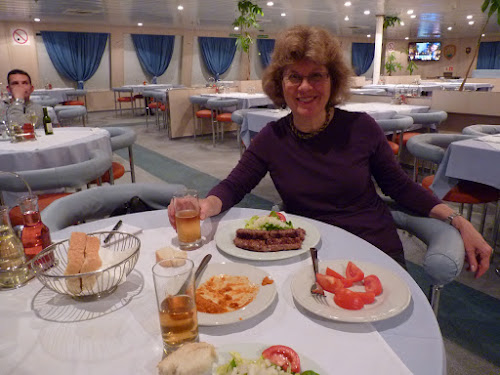 The first clue we weren't in Italy anymore: The food. Not bad at all, but very different, and served by a burly waiter who might have been doing double duty as a dock worker. I'm pretty sure were were the only Americans on the ship, and I didn't see many Italians. The ship's restaurant was a pleasant surprise. We ordered what we recalled as favorites from past trips: Cevapi, small, grilled sausages; Ajvar, a mixture of roasted red bell peppers, eggplant and garlic; a Shopska salad (tomatoes, cucumbers and cheese) and beer. 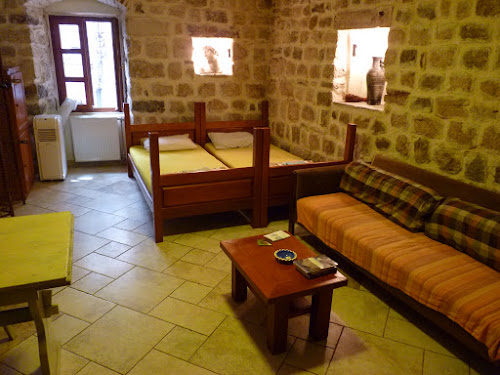 After a night on the ferry, followed by a two-hour, cliff-hugging coastal bus ride from Bar, we were pleased to find that the apartment we booked at the Old Town Hostel in Kotor was exactly as advertised. The hostel is within the town walls where there are no cars. New as of last year, it has dorm rooms, but also two private rooms with private bathrooms. We paid around $60 a night for this room with three twin beds, a couch, a kitchen, new bathroom and shower, AC and plenty of hot water and light. It was fun having many of the benefits that go with staying in a hostel, such as advice from young, English-speaking managers shared over shots of homemade plum brandy. 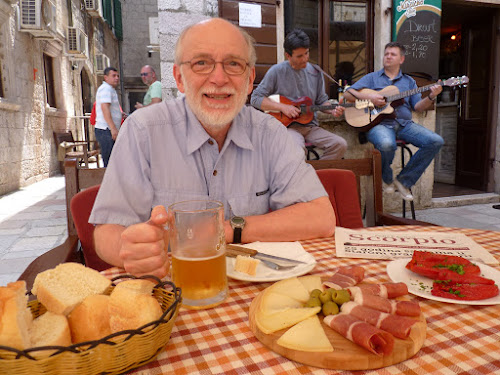 First meal was at the Caffe Scorpio where we learned about the local smoked prosciutto made in the nearby village of Njegusi. We've pretty much decided we can live on this plus roasted peppers, salad and Ajvar. Our first impression is that Kotor has given itself over to tourists. Cruise ships call here which means that during the high season, thousands flood its tiny stone alleyways and little plazas. Virtually all of the shops are tourist shops and all of the restaurants and bars cater to tourists. The whole town is small enough to walk around in an hour, but for some reason, we found it appealing as a first stop after the long journey from Italy, and it made an excellent base for exploring towns and villages by bus. 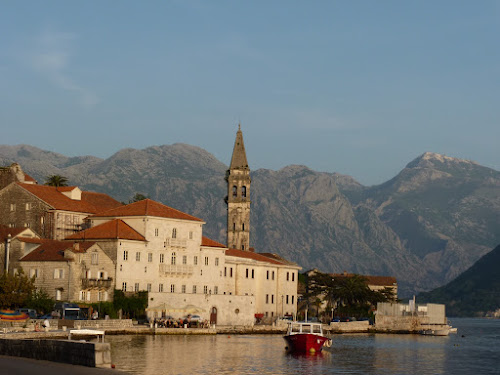 Above is Perast, a village designed by the Venetians when they controlled this area in the 14the century.
Kotor was protected in medieval times by its deep-water fjord and castle ramparts that wend up a steep mountain. One of the main activities is to walk up 1,350 steps along the fortress walls to the castle ruins. It took us about one hour and forty minutes to get up and about 30 minutes to get back down, navigating hairpin turns and a few more walkers than usual with two cruise ships in port. 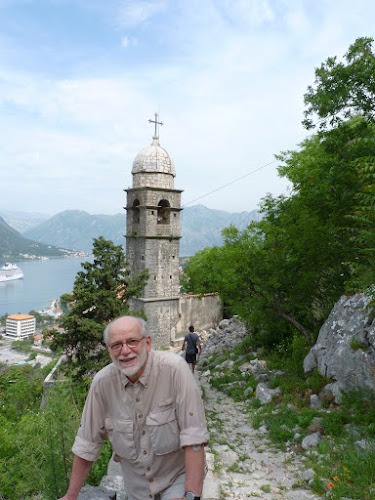 Like most of Serbia, Montenegro is mainly Orthodox Christian (about 70 percent, with the remainder Catholic plus a small number of European muslims). Sunday was Orthodox Easter, the day we decided to take a one-hour bus ride to Cetinje, a sleepy town in the mountains that was once Montenegro's capital. It was a special day at the Cetinje Monastery where we met Father Raffjel, 27. 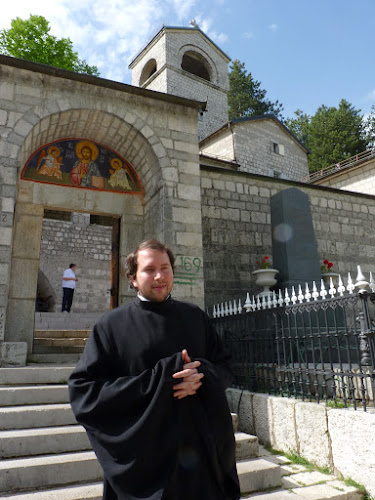 He seemed anxious to strike up a conversation with us in English even though it was a busy day filled with Easter services. He explained that he began studying for the priesthood at age 17, and lives at the monastery along with four other priests and 18 monks. Orthodox Christians make special pilglrimages here to venerate the monastery's most prized relic- the mummified right hand of St. John the Baptist, kept in a closed casket, along with a few shards of the true cross. The casket is only opened for those who come to worship, but he let us tag along and peak inside. Sorry, no pictures!
Next stop: Belgrade