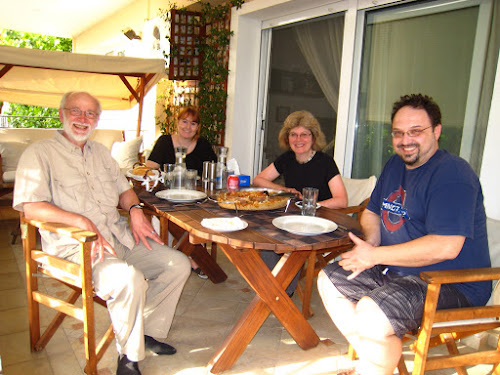 At home with our Couchsurfing hosts, Pernille and Michalis

Scrolling though the thousands of profiles of people signed onto Couchsurfing.org, it's easy to get the impression that all the hosts are single 20-somethings and all the guests are backpackers looking for free places to stay.

Michalis Mathioulakis and Pernille Busborg, both professionals in their 40s, don't fit the typical profile, and we long ago traded in our backpacks for rolling carry-ons. So much for stereotypes. Couchsurfing is for anyone.

We ended our three-week trip through Italy and the Balkans with a two-night stay at their apartment in Triadi, a village of about 2,000 a few miles from the airport in Thessaloniki, Greece where we planned to catch our flight back to the United States.

We spent the first night in a downtown hotel, partly to explore Thessaloniki a bit before spending the weekend with Michalis and Pernille, and partly as a precaution for dealing with any problems we might have crossing the border into Florina, Greece by taxi from Bitola in Macedonia.

These are two different countries, after all, with somewhat strained political relationships that surface in varied ways, often over the use of "Macedonia'' as the country's name. Macedonia is a region, part of which has historically been part of Greece, so in Greece, at least, it's politically incorrect to refer to what is officially named the Former Yugoslav Republic of Macedonia (FYROM) as simply "Macedonia.''

The taxi driver drove across the border with no problems, save for a 5 euro payment one of the guards asked for to "expedite'' the process. Once in Florina, however, where we were to catch a bus to Thessaloniki, he had a hard time finding the bus station. Reluctant to ask for directions in Macedonian, he asked in English, but his English was poor and he couldn't understand. None of us spoke Greek, so Tom ended up using his his iPhone GPS to find the station.

Thessaloniki is a busy port city, with many high-rise buildings, a nice seafront walkway, lots of good cafes and restaurants and a few historical sites. We didn't spend much time there, mostly because we were anxious to meet our Couchsurfing hosts. Within minutes of arriving by city bus from our downtown hotel (actually two buses, with a transfer at a depot that doubles as the parking lot for an IKEA store), we were relaxing together on their porch, sharing stories and talking politics and economics as if we were old friends.

The spare bedroom (pull-out couch) in their roomy third-floor flat became "our room'' at no charge, as is the Couchsurfing way. Like a type of pay-it-forward blind date, the understanding is that Couchsurfers find ways down the line to repay the hospitality they receive, either by hosting travelers themselves, or arranging to get together for coffee and conversation.

Anyone would be lucky to have Michalis and Pernille as guests, even luckier to have them as hosts. I can still smell a pasta, tomato and sausage dish Michalis made one evening when we returned "home'' from a day of sightseeing.

Pernille, who is Danish, who moved to Greece as a student, loved the sunny weather, met Michalis and decided to stay. She runs an online language school from home, and teaches English and Danish. Michalis is a financial advisor and the administrator of a small school in the area. They work hard during the week, and like to relax on weekends.

The afternoon we arrived called for getting in their car and driving to the beach where we snacked on calamari and fried sardines and drank Ouzo, the anise-flavored Greek liquor that turns milky when mixed with water or ice. We talked about everything from our families to the 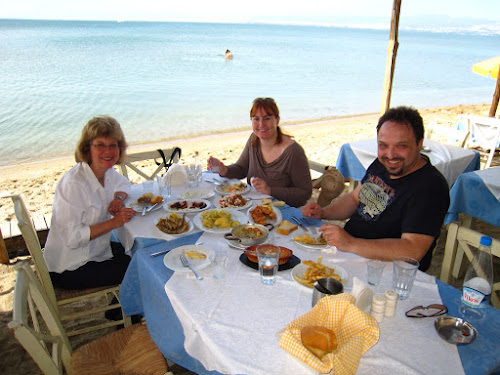 Ouzo on the beach

Greek financial crisis and their decision to stay in Greece even though they could live in more financially-stable Denmark. For Pernille, who speaks fluent Greek, it all comes down to the sun. She can't live without it.

The "Crisis'' as everyone calls Greece's financial collapse, has affected everyone, mainly in the form of higher taxes, new taxes and cuts in social benefits. But people still seem to enjoy life. Later that evening, Michalis and Pernille invited neighbors over to watch the Eurovision song contest finals on TV. This is something like the vocal equivalent of the Olympics with a little Dancing WIth the Stars thrown in. Singers representing every country in Europe compete with music, wild (read skimpy) costumes and over-the-top special effects. Judges from the various countries then award points to the competitors. You can't vote for your own country, but there didn't seem to be any rules about favoring geographic neighbors and friends. The votes are announced Academy Awards-style, with each country's presenter hemming and hawing to increase the suspense. The show didn't end until 1:30 a.m. No worries. We kept each other awake casting our own votes, drinking wine, eating Michalis' homemade nachos and cheering on the winner - Denmark! 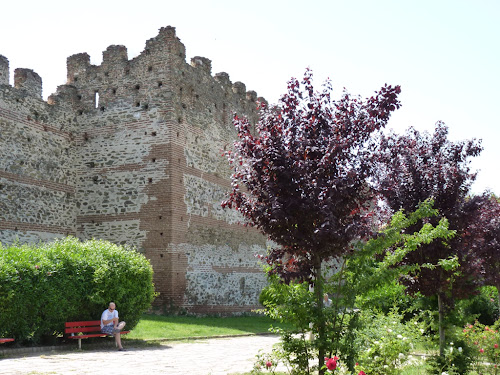 We spent part of the next day exploring a bit more of Thessaloniki, Greece's second-largest city next to Athens. Sunday was an interesting day to be there because of the many baptisms and weddings that take place in the Orthodox churches. Most families head to a local restaurant afterwards to celebrate, the reason for the Disney balloons in the photos below. 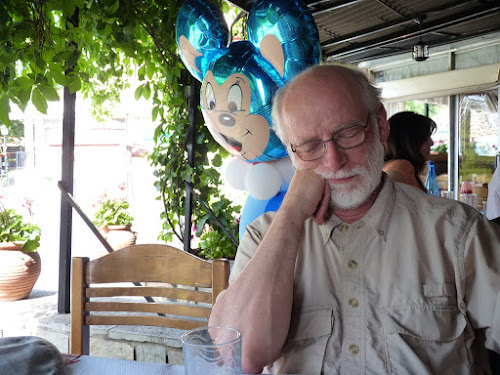 The late-night TV-watching and partying took its toll on Tom after we stopped for lunch. He told me to wake him up when the bill came. But, instead of bringing the bill, the waiter brought not one, but two FREE desserts. 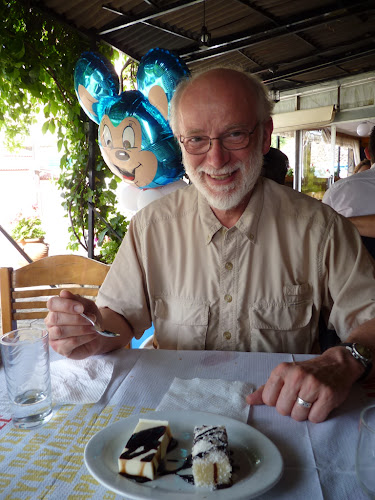 Wake up call
Tom was a happy man once again.

Well, folks, that's it for this trip. We stopped in more than a dozen cities in five countries in 22 days, met wonderful people, ate great food, learned a few words of Serbian, Macedonian and Greek, and came back with $11 worth of Macedonian currency because no one at the airport in Amstedam would exchange it for dollars or euros. If there's anyone out there who wants it, let me know!

The highlight of our 22-hour trip back home to Seattle was the special Hindu meal service offered by Delta Air Lines. We're not Hindu, but we order it whenever we can. 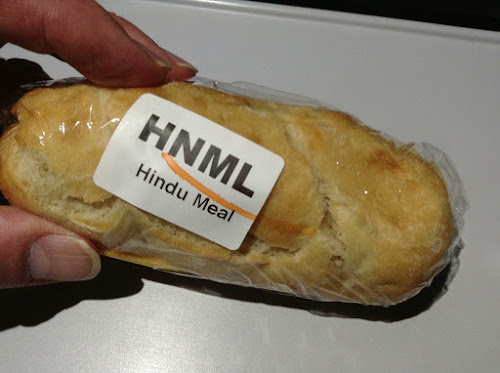 In all fairness, this was just the snack (the same sandwich everyone else got, only with tomatoes instead of turkey) The main meal, pictured below, was actually quite tasty and 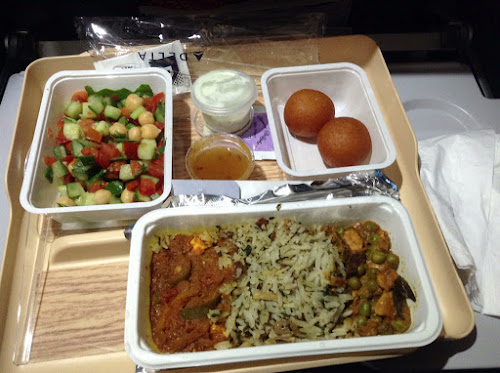 more nutritious than the usual pasta or chicken.