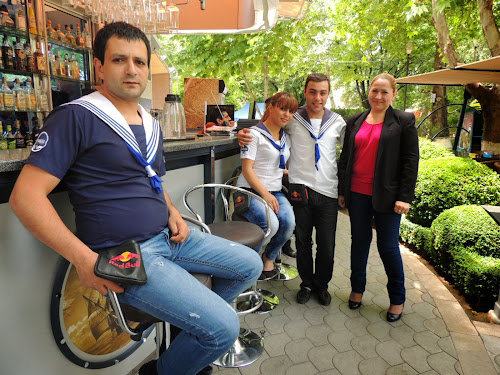 Starbucks Not. The Cafe Flagman near our hotel is our new hangout. It's all outdoors, with tables and comfortable sofas shaded from the sun by awnings made to look like sails. This is an interesting theme given that Armenia is landlocked, but I guess it's OK to get by with visions of the sea to go with these sunny skies.
We stopped here for dessert one evening, again for coffee one morning, and today to use the Wi-Fi, and catch up on writing. The hostess in the pink blouse was shy about using her English. At first we thought she didn't want to bother with us, but today when we walked in, she smiled and asked, "How are you?'' I think that makes us regulars.
We continue to enjoy meeting the people here in Armenia, thanks to some helpful connections made locally and through friends in Seattle. 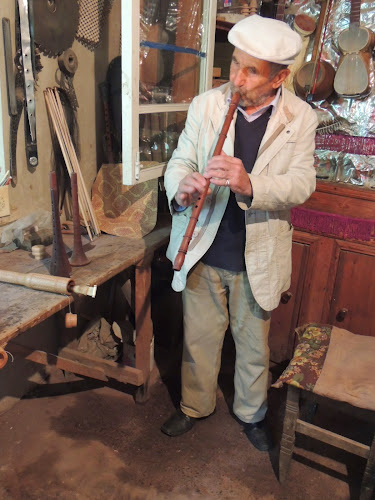 A day trip into the countryside with Envoy Hostels led us to Kolya Torosyan, above, a musical instrument maker in his 80s. He lives in the village of Byurakan on the slopes of Mt. Aragats, the highest mountain in Armenia. He carved this traditional flute, called a duduk-doodook, from apricot wood in a closet-size workshop in back of his house. The flute has a warm, low-pitched saxophone sound. Soon it will be hanging 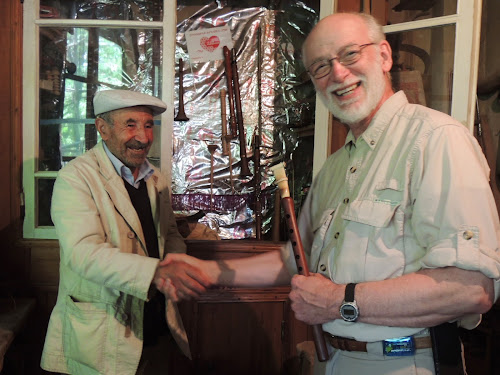 on our wall at home as the latest addition to Tom's musical instrument collection! The weather in Yerevan has been in the mid-70s and sunny most of the time, but at 10,500 feet, Mt. Aragats still has snow. It took our van quite a while to negotiate a rocky, uphill road to the top where we stopped briefly for a short walk and 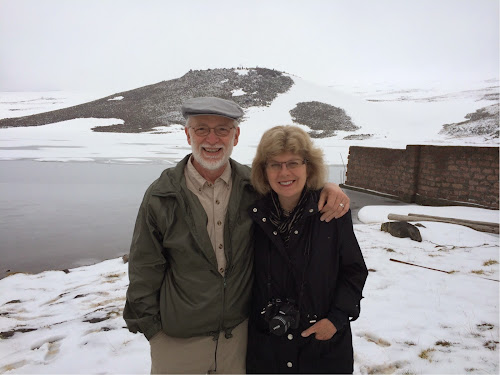 photos before heading back down for a stop at the Amberd Fortress and a three and half mile hike to Byurakan. What remains of the fortress was finished in the 12th century after it was captured from the Turks. It's good we were here in May because the area is usually inaccessible because of snow. We were also able to walk to a church built sometime in the 11th century by Armenians. Armenia claims to be the first country in the world to adopt Christianity as its state religion in 301 AD. The official church is the Armenian Apostolic Church. It has a spiritual leader, similar to the Catholic pope, who lives outside of Yerevan in Etchmiadzin, the "Vatican City'' of Armenia.
Our hiking guides, two sharp young women in their 20s, lead the way along a steep path through fields of wild poppies to a river and waterfalls. It was tough-going in some places, at least for us. The others in our group were in their 20s and 30s. But we managed to keep up, with stops along the way to smell the wild oregono and fennel. 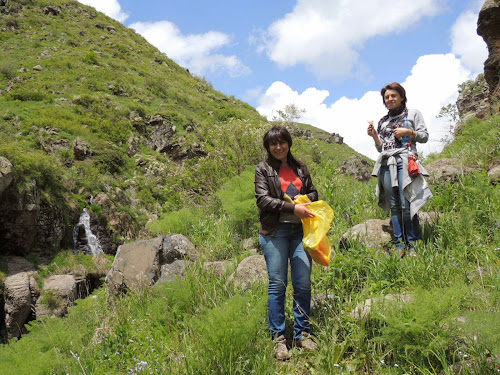 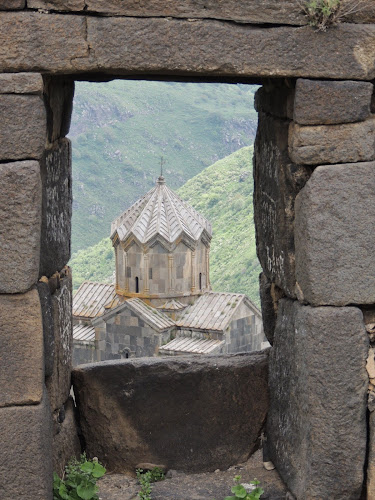 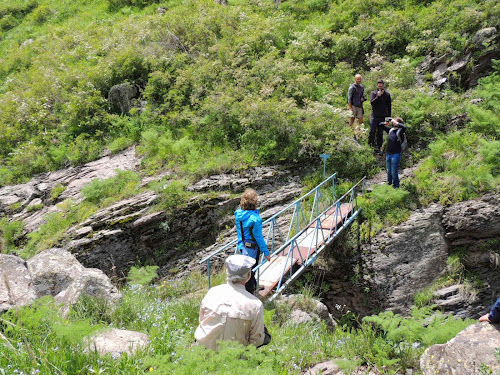 Thanks to a co-worker at The Seattle Times with a friend living in Yerevan, we visited the Maran Winery, below, for one of the most enjoyable wine-tastings I've ever experienced. Anna Israelyan, the online editor of a newspaper here, organized the whole evening for us and another journalist friend. 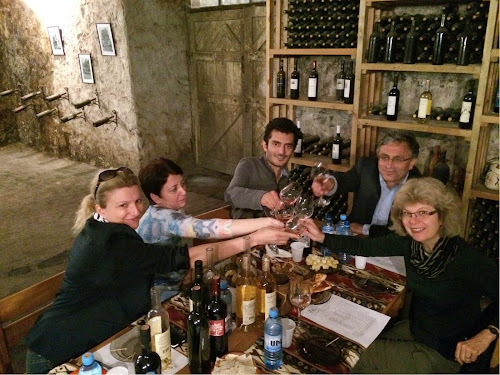 We began with a walk through the vineyards, then it was down into the cellars for snacks and a relaxed evening of tasting and talking. The owner and his son spent two hours with us, opening bottle after bottle, as they explained the history of wine-making in Armenia. According to Biblical legend, it dates back to grapes planted by Noah on the slopes of Mount Ararat. 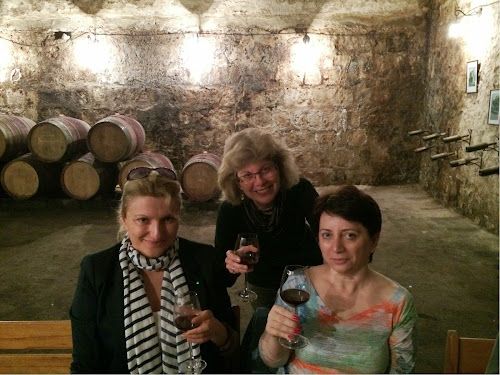 Anna, on the right, did a two-week internship at The Seattle Times a few years ago. I regret that I didn't get to know her then, but was glad to have the opportunity to meet her here in Yerevan. Sadly, the print media isn't doing any better here than in the U.S. Just for fun, here's a photo showing how to spell "newspaper" in Armenian. 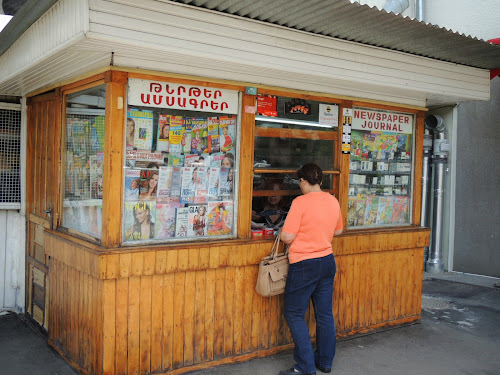 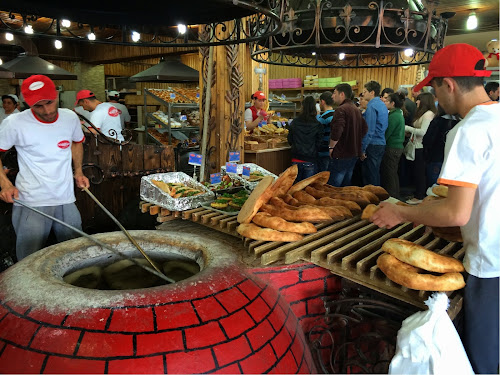 We took the minibus back to Tbilisi before catching a flight to Istanbul, and it was a much better ride than we had coming to Yerevan. There were just nine people on the bus and little baggage compared to 18 people on the way in with suitcases stuffed everywhere. The rest stops were vastly improved. "Five minutes,'' our driver said when he pulled into this bakery. It was barely enough, given the crowds. Women were holding their arms out for stacks of these big rounds of bread fresh from the oven. We managed to squeeze in line and come away with a warm chocolate muffin and four cookies for a total cost of of $1.