In Spain with VaughnTown: Olé! 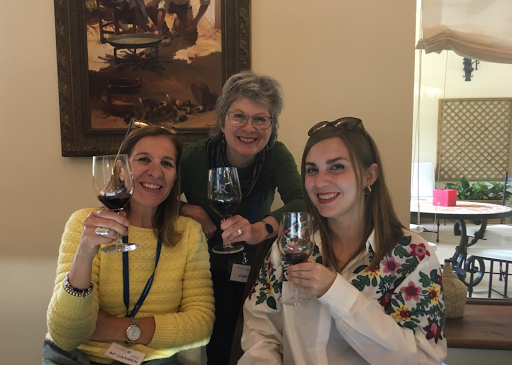 When I planned our latest trip to Spain, I didn't picture myself spending part of my time doing an inpersonation of Ivanka Trump, or playing the part of a dwarf in a parody skit on Snow White. I didn't expect I'd be dancing the Macarena under a disco ball in a village bar after midnight. Nor would I have guessed these "skills" might prove useful to a group of new Spanish friends working to improve their English conversational skills.

My husband, Tom, and I, just finished up a week with VaughnTown  a cultural exchange program that brings native English speakers and Spanish professionals together in a mountain retreat outside of Madrid for six days of one-on-one conversations, skits, and social activities. When I tried to explain to friends back home what we would be doing, everyone assumed we had to know Spanish. On the contrary. The No. 1 rule at VaughnTown is that NO Spanish be spoken the entire time. Started by Richard Vaughan, a business student from Texas who came to Spain to teach English in the 1970s, the program tosses out the idea of teachers, books and formal lessons in favor of non-stop talking, starting at breakfast, and continuing on well past dinner at 9 p.m.

"Summer camp for adults," is how our director, Carmen Villa, describes the experience. The week is free for the English-speaking volunteers in exchange for our time. Vaughn paid for our lodging, meals, wine etc., but not our airfare to and from Madrid. Our home for five nights is the Palacio del Infante Don Juan Manuel Hotel, a restored 15th-century palace in the village of Belmonte in Castilla-La Mancha where film directors used the historic hilltop castle to make El Cid, starting Charlton Heston and Sophia Lauren, and more recently Don Quixote. 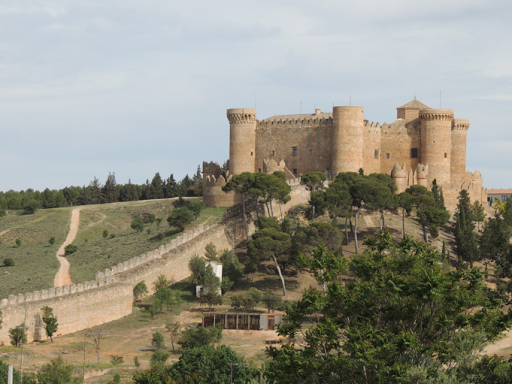 The "Anglos," as we're called, come from all over the U.S., UK and Australia. Sixteen of us have been selected, based on short online applications that asked about our backgrounds, interests and reasons why we wanted to participate. We first meet at a tapas reception in Madrid on the Saturday, before joining the Spaniards for the start of the program on Sunday.

The room fills with friendly faces. There's Peter from the UK, who has plans afterwards to walk the Camino de Santiago trail. Chris, a professional actress from Portland, and her husband, John, plan to take a Rick Steves tour in Spain after the program ends; Carolyn is a retired high school librarian from Atlanta, Her traveling partner, Mary, fluent in sight language, had a long career working with the deaf. They and many of the others are VaughnTown repeaters. We're surprised to find that only five of us are doing this for the first time. The oldest member of the group, Judy, 77, from Austin, Texas, estimates she's volunteered nearly 20 times, and has written an excellent Facebook post about her experiences.

The resumes of the 12 Spaniards we meet the next day are impressive. On the bus, I sit next to Edi,  27, an entrepreneur who owns two restaurants and a moble app company. He and three others are in the midst of a five-month intensive English program at Vaughn that calls for 5 hours of classroom work daily followed by five hours of homework. Like most of the others, he is well-traveled, and we share stories about our mutual experiences in Morocco and Sri Lanka. Pilar from Valencia works for the UN in IT support. She's also a ceramicist and knowledgeable about natural medicine. Carmen is a lawyer for a construction company, with an interest in furthering her English by doing a short homestay in the U.S. Carlos, an executive for Mercedes Benz, is a wildlife photographer whose philosophy is "life is a hobby."  The youngest is Martin, 22, a kindergarten teacher who spent two years studying English while living with a host family in Vancouver, B.C. 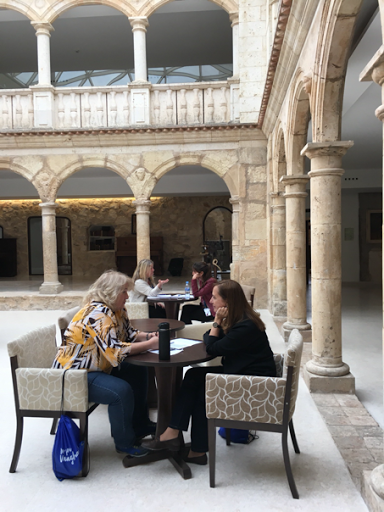 In the beginning, we're told, it will be the Anglos who do most of the talking. Our job is to help Spaniards build their self-confidence and listening skills. By Wednesday, after warming up with some amusing skits and creative getting-to-know-you exercises, the conversation should be around 50-50. At the heart of the program are 50-minute "one-on-one" conversations that take place as we walk around the village, hike to the stone windmills that dot the hillsides above town, or  relax over coffee on the hotel terrace. What we talk about is up to us, but the conversation flows surprisingly well, even without formal topics. 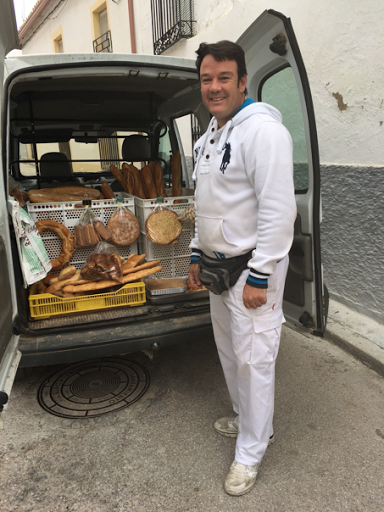 On a walk through the town, where we stop to snap a picture of a baker who makes house calls in his van, I chat with  Maite, the manager of a computer unit for the Bank of Spain. We discover we both traveled to Myanmar recently. Laura, 27, a veterinarian thinking about switching careers, shares a photo of a street dog she rescued in Panama. Our talk turns to pets, travel, her boyfriend and her mother's volunteer work in third-world countries. On a walk to the castle, Laura introduces Tom and me to Miguelitos, a Spanish pastry filled with chocolate. She buys a box for her boyfriend, but insists on opening it so we can try one. 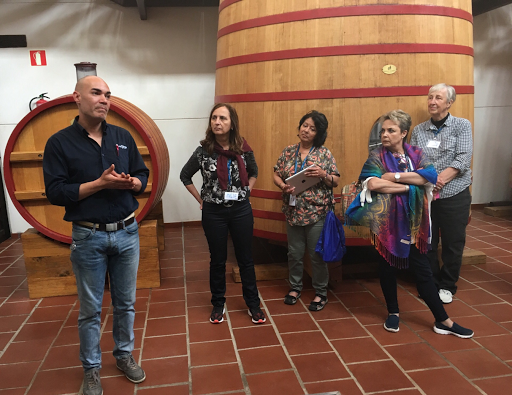 Interspersed throughout the days are mock conference calls (I play the role of Ivanka Trump scouting out a location for a casino in Spain while the "mayors" of four cities make their pitches) and telephone sessions on how to order a pizza or deal with lost luggage. One day we take a field trip to a local winery for a tour and tasting. No matter what we do, we look for ways to explain English idioms (You're in the Dog House was a favorite), and the multiple meanings of phrasal verbs (break in, break up, break down etc.). Meanwhle, the Anglos work on adapting to the Spanish lifestyle of eating lunch at. 2 p.m., followed by siesta until 5 p.m. and dinner at 9 p.m. Just abut the time we're thinking about going to bed, the Spanish are ready to party.

Most evenings include an 8 p.m. "entertainment" hour for which Alba Rosa, 28, Vaughn's high-energy "Master of Ceremonies" drafts varioius people for skits involving wigs and other props, One night, Alba persuades several to dress up as witches as she concocts a caldron of Queimada, a "fire" drink made from a distilled spirit, coffee beans and sugar that erupts into blue flames when lighted. Tradition calls for the reading of incantations during preparation so that those drinking it will be conferred with special powers. 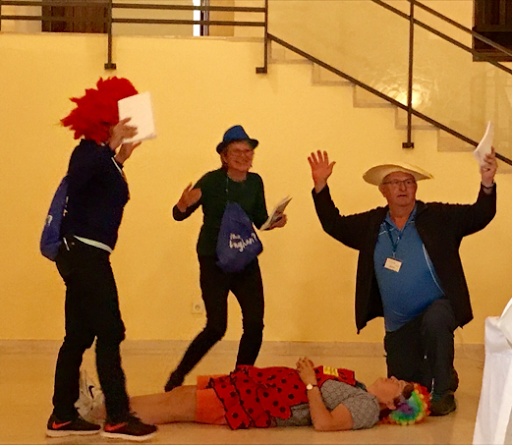 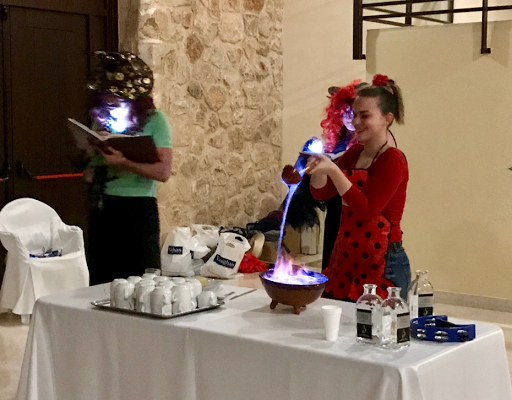 Whatever we do, there's just one goal to keep in mind: The purpose of this program is to help the Spaniards gain confidence in their ability to speak and understand English. The "final exam" is a five-minute presentation the Spaniards must deliver in English on a surprise topic. With some coaching from the Anglos, they spend the day writing, rehearsing and revising. When the time comes to take the stage, they are nervous, but they all do beautifully, speaking on topics ranging from love to skinny-dipping.

Belmonte is a sleepy town with several churches, a city hall, a park, a grocery store and a couple of banks. We rarely see anyone out on our walks around town, so we're surprised when Alba announces she's found a pub open late where we can celebrate our last night together. It's nearly 11:30 p.m. when we set out walking in the dark to find the cozy bar just outside the town's medieval walls, A few beers and gin and tonics later, we're all dancing the Macarena under a disco ball. As they really do say in Spain, Olé! 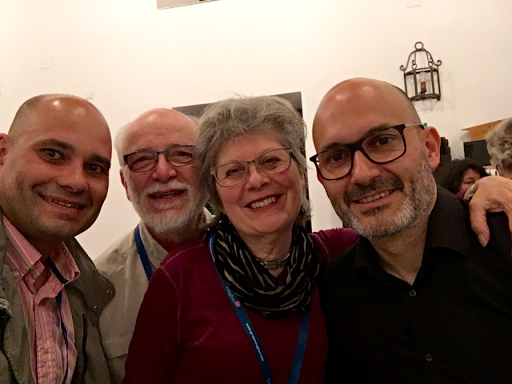 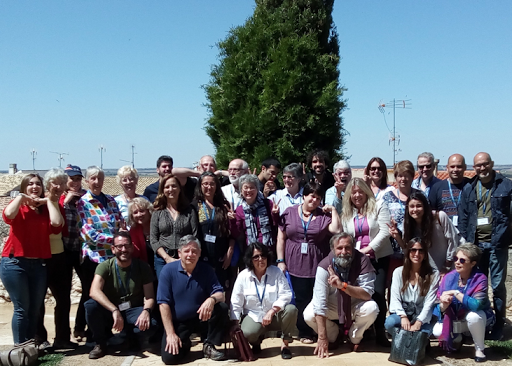