News reports of violence and immigration problems in Mexican boarder towns have again caused Americans to rethink  plans for travel south of the border.  If this is you, come along with us to the city of Puebla, the capital of the state of Puebla, a vibrant colonial town surrounded by mountains and volcanoes, two and a half hours southwest of Mexico City.

With a population of 1.5. million, the fourth-largest city in Mexico is filled with university students, artists and prosperous Poblanos, named the same as the plump pepper used in its signature moles. Families and street vendors pack its leafy Zocolo nightly, joined by stylish Mexican tourists on weekends. Like us, the only Americans we saw in three days, they come for the mild weather, artisan markets, outdoor cafes and white-table-cloth restaurants where two can dine well for under $30.


Disappointed with the Airbnb (it happens) we rented for $45 a night above a noisy pizza parlor (the pizza at La Berenjena is fantastic, not so the music), we found the Hotel Casa de las Palmas, a 17-room hotel in an 18th century building that was once a rooming house for Spanish workers. For the same price, we got a huge room with high ceilings, a marble bathroom and breakfast served in the courtyard. The location was ideal, a few blocks walk to the Zocolo and cathedral, and at the edge of a pedestrian street where craft vendors set up a weekend market.

The Spanish arrived in the early 1500s, first in the nearby town of Cholula, where they raised Aztecs temples and replaced them with churches. But rather than modernizing the ancient city, they moved onto Puebla, about nine miles away, where they established the first Spanish-built city not founded on the ruins of a conquered settlement.

With its elaborate stone mansions and many churches, Puebla has more of a city feel than smaller towns such as Oaxaca or San Miguel. Production of beer, soda, cars and textiles fuel its economy. Some of Mexico’s favorite foods have their origins here, notably the mole poblano and Chiles en Nogada, peppers stuffed with ground meat and fruit and nuts, covered in a creamy sauce traditionally eaten around Mexican Independence Day September 16.

Puebla and Cholula combined have 365 churches (think how it sounds to be here on a Sunday morning!), many of them built during the Baroque era when the Roman Catholic Church responded to Martin Luther’s reformation movement by filling churches with gold as a reminder its power. One of the most elaborate is the Capilla del Rosario, above, inside the Church of Santo Domingo, not far from “Candy Street,” a street lined with shops selling traditional sweets.

Covered  in 24-karat gold leaf, the chapel is a popular venue for weddings for wealthy Poblanos. We stood outside one evening as a bride arrived in a vintage Packard. The chapel filled with guests all dressed in tuxedos and evening gowns.

Uber is the most efficient way to get around. Most rides cost no more than $5-$7. Many of the drivers are women, and most of the cars are new and well-maintained. We used Uber to get to the new International Museum of Baroque, a Japanese-designed  museum that traces the history of the Baroque era and its influences on architecture, art, design, clothing and music throughout Mexico.

From there, it was a short Uber ride to Cholula, known for the ruins of the largest pyramid in Latin America, reached by walking through an underground tunnel. Much of it of the Piramide Tepanapa is obscured beneath a hill, topped by the bright yellow Church of Our Lady of the Remedies with over-the-top gold decorations inside and views of mountains and two volcanoes below.


Besides the pyramid, our main reason for visiting Cholula was to find the restaurant Milli recently featured in Saveur magazine. Milli is a humble, six-table restaurant opened a year ago by five local friends, all of whom emigrated to Philadelphia at one time or another, and returned home, either voluntarily or because they were deported. Their goal, says Leo Tellez, who lived in Philly for two years, then returned home to be with is family, is to create culinary and agricultural opportunities for themselves and others.


Each meal starts with complementary chalupas, little handmade blue corn tortillas made fresh from heirloom corn, and cooked on a hot comal set up in the rear of the restaurant. Friends grow the corn in the owners’ hometown of San Mateo Ozolco, an agricultural community about an hour away. Nothing on the menu is more than $5. With Leo’s help, I chose a fresh, whole fish cooked in pulque, the fermented sap of the agave plant. Tom had chicken mole. Both were beautifully presented by chef Espiridion Hernandez and sous chef Bernardo Rincon, whom we were invited into the kitchen to meet.

With marigold ice cream and homemade flan for dessert, the bill came to $16 for the two of us. Just another example of safe, friendly, affordable travel in Mexico. If you’re rethinking plans, think again, and put Puebla and Cholula on your list. 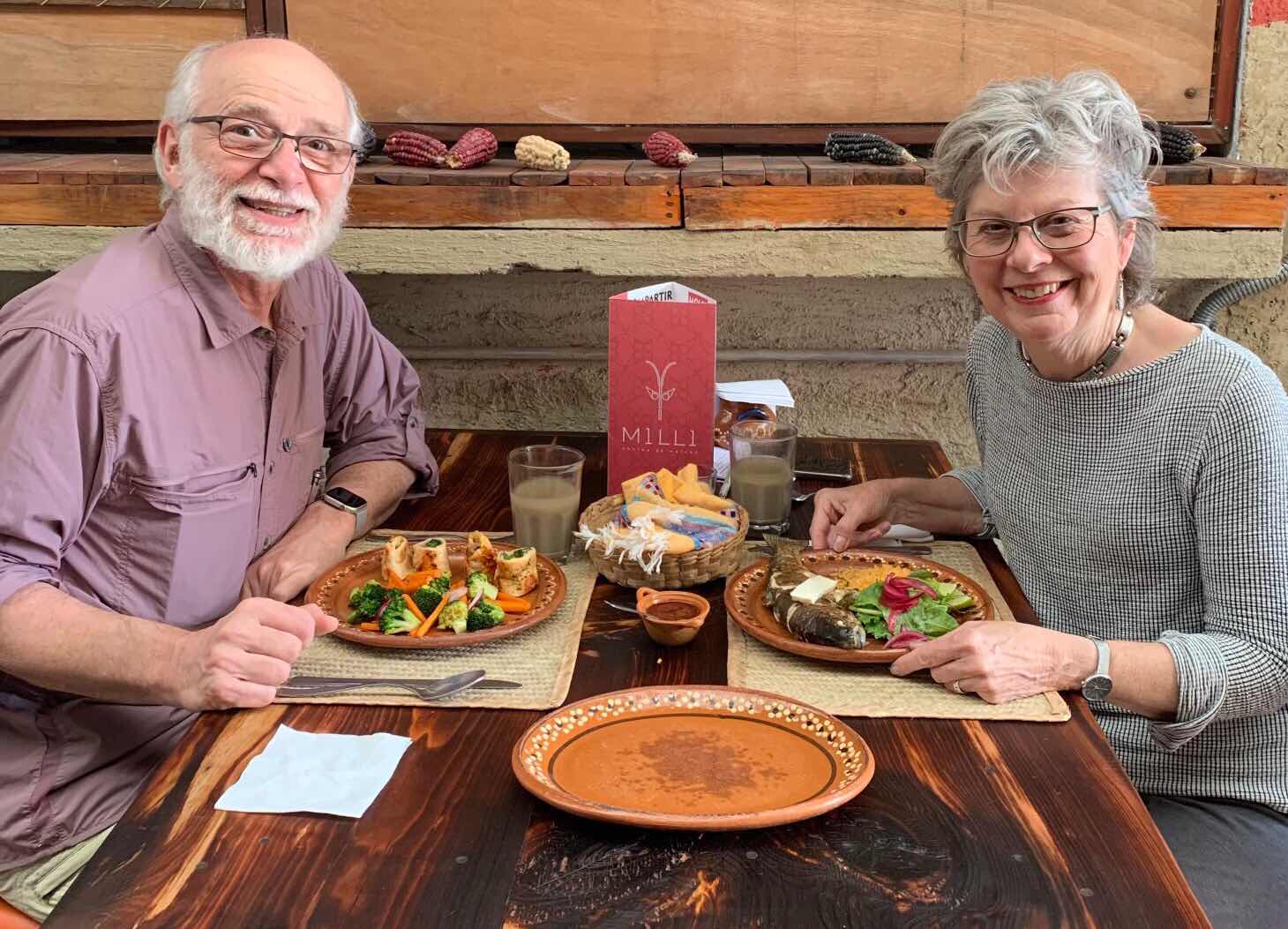