Armenia or Azerbaijan? Both have much to offer curious travelers

"On your first day in Armenia, you are a guest. The second day, you are a friend. The third day you are a relative." - Old Armenian adage.

Although the former Soviet republics sit side by side in the Caucasus, a mountainous region between the Black Sea and the Caspian Sea, visitors to one can't travel to the other without passing through a third country.

With war upending a fragile, decades-old truce, the reasons why this is so are in the news again. Each country claims the right to control the breakaway territory of Nagorno-Karabakh, an ethnic Armenian enclave bordering Armenia, but officially inside Azerbaijan. It was here and in surrounding territories where Armenian forces prevailed in a war in the 1990s that displaced 8,000 Azerbaijani, many of whom fled to the capital of Baku to live as refugees in their own country.

For the average traveler unfamiliar with the political history, it can be frustrating to be so near and yet so far from neighboring countries that would appear easy to visit. 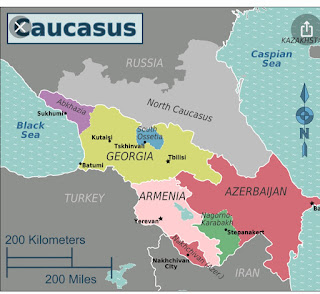 That's what my husband and I discovered while visiting neighboring Georgia six years ago. We settled on taking a mini-bus from Tbilisi to the Armenian capital of Yerevan. Visiting neighboring Azerbaijan would have required backtracking through Georgia, so we saved that until 2018 when we traveled through Uzbekistan in Central Asia, and caught a short flight from there to Baku.

Both cities were fascinating places to visit, for their history, natural surroundings, pre and post-Soviet architecture and a population of energetic, well-educated young people.

Now, sadly, national attention is focused on the two countries, not because they dazzle as travel destinations, but because fighting once again has erupted over territorial disputes.

Cease fires and negotiations brokered by Russia, France and the U.S. will hopefully lead to a renewed truce, but already many lives have been lost. Baku's vibrant downtown main streets have been darkened with giant screens playing video footage of drone strikes by Armenian soldiers.

Until the news of the war hit the front pages, most Americans probably could not find either country on a map. That's a shame, because like most all the former Soviet republics, they offer incredible value and a rich and diverse cultural buffet. You're not likely to meet many Americans, but you will encounter tourists from Iran and other parts of the Middle East.

I look forward to the time, post COVID-19 and post-war, when adventuresome travelers can again have the chance to explore both countries. In the meantime, here's a recap of some of the highlights of our trip to Yerevan in 2014 and Baku in 2018.

So much to say about Yerevan, the capital of Armenia in the South Caucasus. The feeling here is young, hip and energetic, with a hint of the Middle East (Iran is about 200 miles away), in a former Soviet republic coming of age. As usual, one of the best parts about being here, apart from the food, is the friendliness of the people. Armenia's shared border with Iran plus its history of being ruled over the years by Persia (present-day Iran), the Ottoman Turks and Soviet Russia, makes for an interesting mix of people and cultures.

Unlike Tbilisi, Georgia, which had more of a village feel, at least in the old town, Yerevan is more spread out, with wide boulevards, parks and public squares filled with larger-than-life statues. Architect Alexander Tamanyan developed a grid plan for the city in the 1920s when the Soviets we're flush with cash.The main avenues point in the direction of Mt. Ararat, where Noah's Ark is said to have landed after the floods.

Armenians claim the mountain as their own and treasure the views from here, even though Ararat lies in what now is Turkey. Surrounding elegant rose-colored museums and government buildings constructed in the late 19th and early 20th century, are lighted fountains and sidewalk cafes decorated like outdoor living roooms.

The State Museum of Armenian History and National Art Gallery, dominate the former Lenin Square, along with government buildings and a Marriott Hotel. We were surprised to find most of the museum explanations in English. Like visitors to the Louvre in Paris who head directly to the Mona Lisa, we were most interested in seeing the world's oldest leather shoe, on display in a lighted glass case. The 5,500-year-old shoe was discovered in a cave by a team of archaeologists a few years ago. The shoe, made of a single piece of cowhide leather was shaped to fit the wearer's right foot. No pictures allowed.

Of course we enjoyed the food, more Middle-Eastern than Georgian, with lots of grilled vegetables, and dishes incorporating walnuts, apricots and pomegranate. Armenia's specialty is  Cognac. Travelers can take tours and enjoy tastings at the Yerevan Ararat Brandy-Wine-Vodka Factory on the grounds of a former Persian fortress that once housed a mosque, gardens and underground tunnels used to get in and out of the city safely.

Privately-owned until it was nationalized by the Russians, the factory was abandoned after the collapes of the Soviet Union in 1991. It reopened again in 2002 under the ownership of a local politician and arm wrestling champion, and now produces fine Cognacs sold all over the world, but mainly in Russia.

A day trip into the countryside with Envoy Hostels led us to Kolya Torosyan, above, a musical instrument maker in his 80s. He lives in the village of Byurakan on the slopes of Mt. Aragats, the highest mountain in Armenia. He carved this traditional flute, called a duduk-doodook, from apricot wood in a closet-size workshop in back of his house. The flute has a warm, low-pitched saxophone sound. It now hangs in our living room in Seattle as a remembrance of a very special trip.

Anthony Bourdain traveled the world for his television show “Parts Unknown,” so it’s a shame he never made it to Baku, the oil-rich capital of Azerbaijan, boarded by Iran, Russia and Armenia in the South Caucuses.

From land-locked Uzbekistan, we flew across the Caspian Sea to experience one of the ex-Soviet Union’s most prosperous cities situated along the old Silk Road trade route linking China to Europe. Baku’s old city, hidden behind iron gates and medieval walls, evokes a colorful past. Outside the walls is the modern city, filled with one-of-a-kind new office towers, museums, fountains and parks.

The government banned Bourdain from coming here because he filmed a TV show in  Nagorno-Karabakh. The  Azerbaijan government prohibits anyone who visits Nagono-Karabakh from entering the country. It’s the first question the government asks on its visa application. Lie and they find out, you’ll be denied entry, even if your visa was approved.

After prospering as a Silk Road stopover for traders carrying carpets and silk to the west, Baku’s fortunes rose again during an oil boom in the late 1800s. Wealthy merchants from Europe, Russia and the Middle East created a multi-cultural society where Muslims, Christians and Jews mixed an even inter-married. The country enjoyed just two precious years of independence between 1918 and 1920 after the fall of the Russian empire and before the rise of the Soviet Union. During that time, Azerbaijan established a parliament, and became the first majority-Muslim nation to grant women equal political rights with men.

Preserved behind fortress walls is the old city, while just outside the walls are European-styled buildings from the 19th and 20th centuries and futuristic skyscrapers from the 21st.

Baku is surprisingly affordable for being an oil-rich city that attracts international business. Public transport was a bargain. Our seven-room boutique hotel with all the mod-cons and a heated bathroom floor i was $100 a night. A half-hour ride on the new airport Express Bus to town was $1.60. A subway ride cost 15 cents. Dinner for two - olives, bread fresh from the clay oven, soup, salad, a platter of grilled vegetables, roasted chicken and wine -averaged around $17.

Some call Baku the Dubai of the Caucasus, but I think it’s a far more interesting city, given its history and combination of Soviet-style, European and modern architecture. We took an excellent two-hour free walking tour with a volunteer from Baku Explorer. The majority of  people are Muslim, but most practice a version our guide called “Islam Lite.” Almost no one wears a head scarf, and cafes and restaurants serve alcohol.

Above is the Icherisheher station in the old city. Underground, the station preserves the original Soviet architectural style, similar to what we saw in Tashkent in Uzbekistan, although customers use reloadable plastic cards instead of plastic tokens to pay for fares. Above ground, the design in more in sync with modern times.

Museums showcase Azerbaijan’s history as a center for literature, art and textiles. There’s a national museum of literature, named for it’s most famous poet, Nizami Ganjavi; a Museum of Miniature Books filled with 3,000 titles displayed in glass cases; and my favorites, the Azerbaijan Carpet Museum, shaped like a rolled-up carpet; and the Heydar Aliyev Cultural Center, an art museum and exhibition center, known for its flowing, white curves, and excellent permanent exhibit on the history of art, music and crafts in Azerbaijan.