Visiting Zagreb and the Museum of Broken Relationships 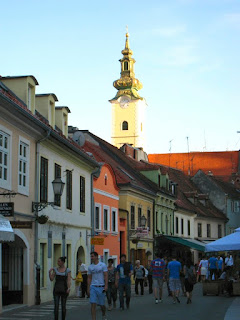 Like so many of the Central and Eastern European cities, Zagreb is part hip, sophisticated city, part small-town village. Perhaps it's a throw-back from the Communist years, but Zagreb feels like one vast outdoor living room.

This is a city make for walking. With the exception of a few main thoroughfares reserved for electric trams, the streets and squares belong to pedestrians. Dozens of cafes- the majority selling only coffee and drinks rather than food - draw crowds from early morning to late night. 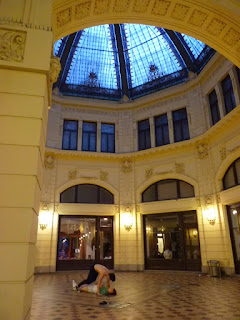 We arrived by train from Split via the new fast "tilt'' train that curves around the tracks, cutting what used to be an eight-hour trip through the mountains to about 5.5 hours. Unfortunately our train developed a problem and we had to take part of the trip by bus, then get back on an older, slower train for the final leg of the trip to Zagreb.

We walked out of the railway station and hopped on one of the free trams going to Jelacic Square. A group of teenage boys were putting on an awesome break-dancing performance. All around were young people, dressed in the latest fashions. What a surprise. No signs of leftover Communist-era dreariness here. Zagreb looks and feels like a young Vienna or Budapest. 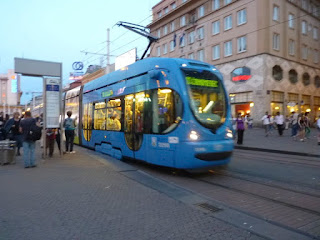 Our home for two nights was an $80 apartment on Radiceva Street, a pedestrian street halfway between the Medieval upper old town and the modern lower town. 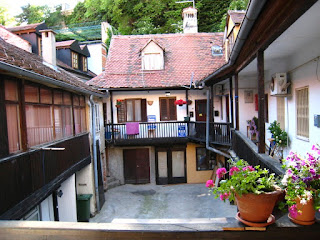 The owner, Jasminka, met up with us only briefly to give us the keys, but from the way she furnished the apartment, she seems like someone who would have been nice to get to know. Persian rugs decorated the floors and a travel poster from Iran hung on a wall between two windows facing the street. In a typical Croatian sleeping arrangement, twin beds covered with orange spreads were on opposite ends of the room. 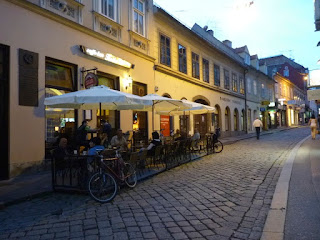 One street over was Tkalciceva Street, a long pedestrian promenade lined with cafes and restaurants where we ate a tasty risotto with asparagus and fennel at Ivica Marica, one of the few places along Tkalciceva selling serving anything more than popcorn or chips to go along with a long list of drinks. 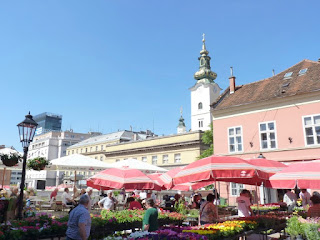 The people-watching was especially good at the Dolac farmers market, three-floors of stalls selling produce, cheese, meats and flowers. We went there for a breakfast of coffee and cherry strudel our first morning, then shopped for some yogurt, pastries, fruit and milk to bring back to the apartment. Vendors were generous in handing out samples. When I asked about the differences among three types of dried figs, one offered me a slice of each. Of course, we bought a few of each. We especially liked a variety dusted with a light coat of flour to keep the moisture inside.

Our apartment was halfway between the lower town and the upper town of Gornji Grad, reachable by walking up several short flights of stairs or taking a one-minute ride on a little funicular that was out of service.

The upper old town is the prettiest part of Zagreb, yet it seemed eerily quiet, more showpiece than living city, filled mainly with churches and baroque-style mansions housing museums and government buildings.

Guidebooks fail to mention which may be the most interesting museum in Zagreb, one we'd been curious about even since seeing it among the listings of sites on a sign near the train station. 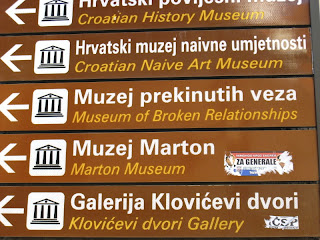 The museum is the work of designer and artist Drazen Grubisic and film producer Olinka Vistica, business partners whose four-year romantic relationship ended about six years ago. 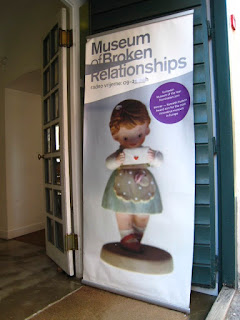 "We asked ourselves, 'What are we going to do with all the stuff,' '' says Drazen. They came up with the idea of starting a traveling art exhibit made up possessions donated by people who would accompany the donations with personal notes about what led up to their break-ups and what the items symbolized. 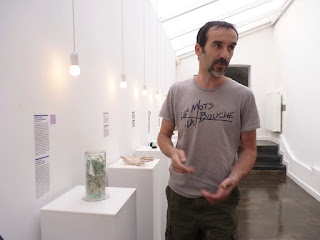 "We observe just about every important occasion with some sort of a ritual," says Drazen, pictured above.  "But when you break-up, that's it."

Now with a permanent home and cafe inside an 18th century baroque palace in Zagreb's upper town, the museum continues do traveling exhibitions (this year in New York and Boulder, Colorado) and acquire more items and more stories. The collection includes around 1,000 items, 104 of which are on display in Zagreb.

One of the first items visitors see is a furry white wind-up rabbit – a relic of Grubisic and Vistica's own relationship, which ended six years ago.

"We traveled a lot and one of us would take it wherever we went," Drazen says. It was meant to travel the world, but made it only as far as Iran where Drazen photographed it in the desert.

In one room labeled "Rage and Fury'' hangs an ax donated by a woman in Berlin who used it to chop one piece of her girlfriend's furniture everyday for 14 days after the woman left, then went on a two-week holiday. 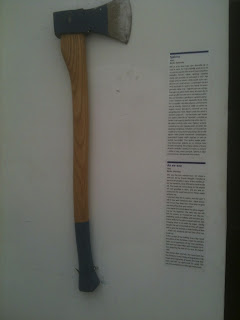 About 70 percent of the items have been donated by women, 30 percent by men. The exception is items coming from Turkey. Most are donated by men, something Drazen credits to changing cultural attitudes.

In a room labeled  "Rites of Passage'' is a blue chiffon blouse worn by a woman from Ireland on the day her husband took her out to lunch to tell her he was leaving.  In the same room is long, silky dress purchased by a Croatian woman to celebrate her 8th anniversary. 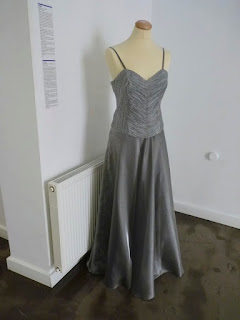 She never wore it because her husband broke up with her two weeks before.

"May it dance with teddy bears, wedding rings, love letters and other people's boxer shorts, but without me," she wrote. "I have to dance my dance somewhere else, away from it."

I'm sure I'm not the only person to have wandered through here thinking about what I might have to offer if I were ever in a position to do so. My choice would be easy. It would be a leather key ring I've been carrying around for the 35-plus years since my husband gave it to me for Christmas one year. A friend criticized it as a "cheap'' gift, insinuating that I could do better than marry Tom.  He was wrong, of course. Our marriage has lasted, and so has the key ring.


Here's a link to our photo gallery
Posted by Carol Pucci at 8:23 PM