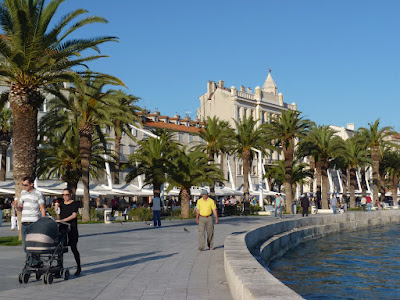 Hello from Split where we arrived after a short and scenic bus ride along the coast from Sibinek. Split is Croatia's 2nd - largest city and a major transportation hub, so we expected it to be busy, but we weren't prepared to see thousands of people on the streets, singing, marching in a parade and floating baloons. As it turned out, we arrived on the feast day of St. Dominus, Split's patron saint, a holiday equal to 4th of July or New Year's back home, fireworks included. 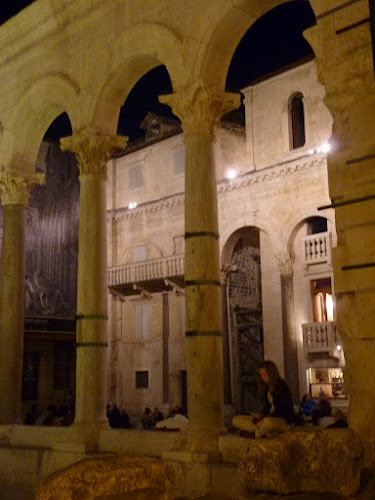 Besides a beautiful coastline and seafront prominade, Split is known for Diocletian's Palace, the 1700-year-old, still-inhabited retirement home of the Roman emperor Diocletian, a Croatian, who built his retreat inside what is now the bustling Old Town center filled with hotels, cafes, museums and shops. 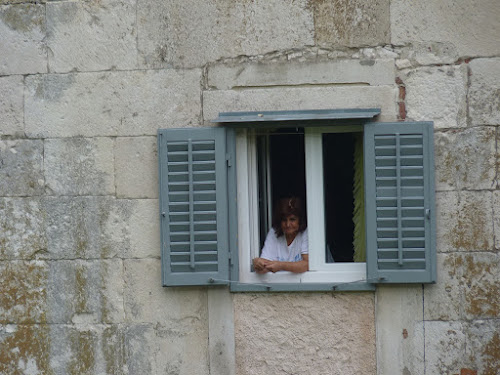 Much has changed, of course, but people still make their homes in the former residences of nobles and wealthy merchants. Streets and walls are made of thick slabs of stone, and the whole area is off limits to cars. Shops selling everything from stylish shoes to handmade chocolates line a network of narrow, pedestrian-only alleyways.

Sleeping inside the palace walls has its pros and cons. We rented a fourth-floor room from Tina and Ivo Saric, a father-daughter team who own Base Rooms above their little souvenir shop in a refurbished building next door to what was Diocletian's Temple of Jupiter.

The narrow alley leading to their shop is sometimes so crowded with tour groups we have to stand in line to get to get home. Around the corner is the Peristyle, the "palace square'' in Diocletian's time, used today for everything from the Croatian equivalent to the Occupy Movement to tango dancing. 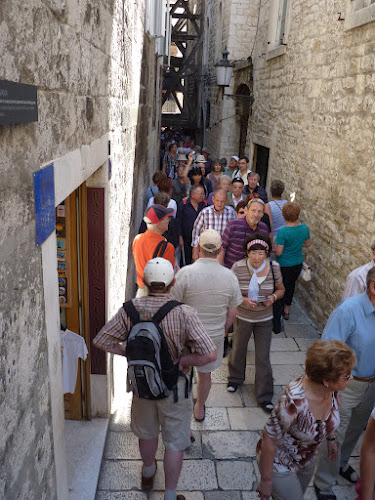 The advantage of being right here is that we're able to walk out our door and find a seat on the steps for nightly guitar concerts at the Luxor cafe decorated with columns made of the same color rose stone Diocletian imported from Egypt.

Across the square is Diocletian's former mausoleum, converted to a cathedral in the 7th century, and topped with a 200-foot bell tower that took 300 years to build (and still wakes everyone in the neighborhood up at 6 a.m.!) 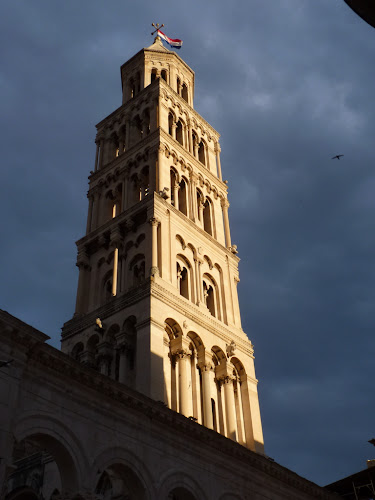 All of Split became a street carnival on the feast day, with vendors setting up stalls along the waterfront, and people relaxing on sofas and chairs at the outdoor bars and restaurants.Tina told us this is the one day of the year when everyone stocks up on cooking utensils, mainly wooden spoons and spatulas, and parents buy wooden toys for their children. 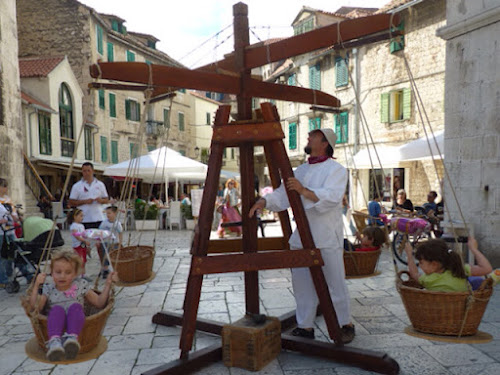 The action at the "Jupiter'' bar, just behind the temple, kept us awake until around 1 a.m. No complaints, though. This is a great time of the year to be in Croatia. The weather is warn and sunny, and after the feast day celebration ended, there were few people around. It was if we almost had the town to ourselves, with the exception of a few tour groups, mainly German and Japanese. There was no wait to climb 180 steps inside the bell tower. When we reached the top, we heard music. It was the sound of an a cappella male choir performing below in an area of the palace Diocletian used as the entry to his living quarters. 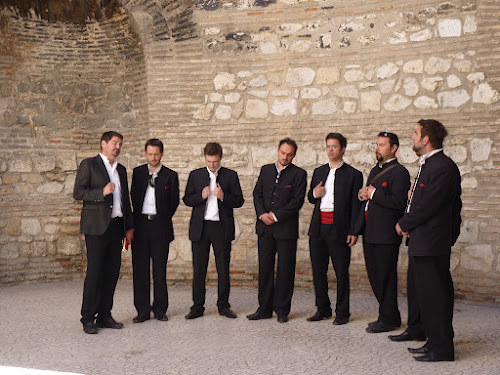 Tina and Ivo have been interesting to talk with. Tina is an artist, and her father at first bought the building to use as an art gallery. Later, he added three rooms, all nicely equipped with new bathrooms, TVs, Wi-Fi and computers, for about $80 per night. Both Tina and Ivo grew up in Split and seem to know the answers to just about every question. Split takes its name, Ivo explained, from the latin word for a yellow flower that once carpeted the hillsides.

For dinner, Tina recommended a local restaurant called Fife, in a neighborhood called Varos, near the harbor. We sat at outdoor picnic tables. Tom ordered pasticada, the local specialty, made with potato dumplings and slabs of pot roast. I had stuffed sweet peppers and we shared a half-liter of the local white wine. The whole bill was less than $30, and we ended up going back twice. We liked the food, the prices and the mix of locals and tourists. It's interesting how some restaurants treat travelers in a way that says "We're never going to see you again," and others treat you like loyal customers. Fife treated us like regulars the first time around, so that's what we became. 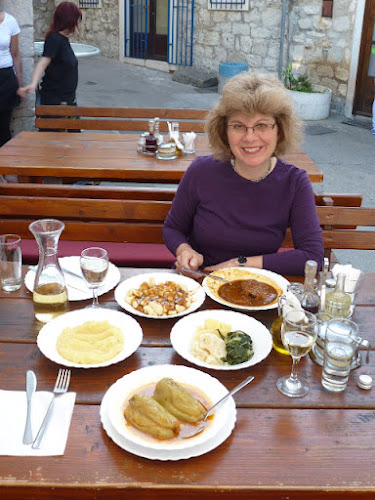 Getting weighed in public was not one of my goals for this trip, but Tom did his part to support the local economy by stepping on this woman's scale. She charged two kuna, about 20 cents, and seemed to have a steady stream of customers. I thought it was interesting that she parked her scale each day across from a bakery selling pizza and pastries. 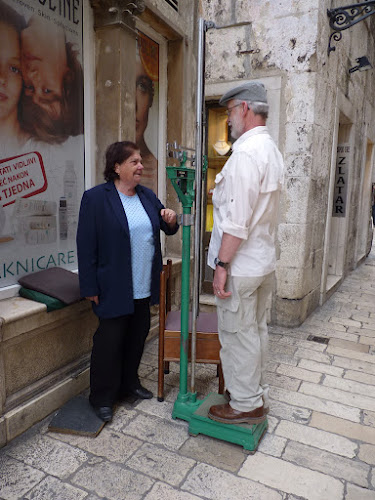 Walking off all of this food and wine has been easy. Beyond the town center are parks, waterfront paths, beaches and hilltop pine forests. From Varos one morning, we hiked to Marjan Hill, a lookout reached either by climbing a long series of steep steps or walking on a path that follows the coastline. This was the view from one of the cafes along the way. 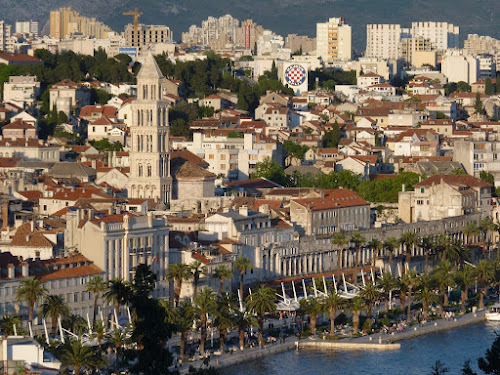 While walking, we heard a man yell out "Welcome to Croatia,'' and looked up to see him and his wife standing on a ledge next to an iron fence. They invited us to climb up and join them for a look at the home of a wealthy soccer player. We did, although we had no idea who the player was or why we were looking at his house. They seemed impressed, and that was good enough for us. 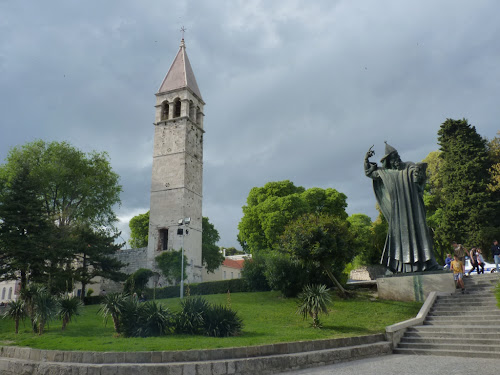 Beautiful sculptures by Croatian artist Ivan Mestrovic decorate many parks and gardens. We spent a pleasant hour or so visiting a museum in a house he built for himself in the Marjan neighborhood. Above is his huge statue of Bishop Gregory of Nin that sits outside one of the palace gates. His big toe is worn shiny from people rubbing it for good luck.

Here's a link to our photo gallery

Next: Onto Zagreb on the "tilt'' train.