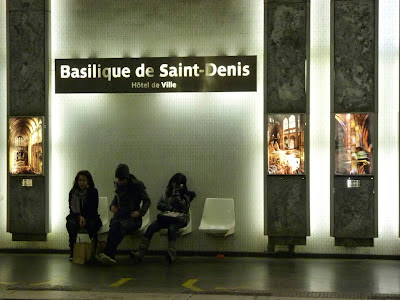 Elaine Sciolino's story in the New York Times today on a colorful ethnic market in the Paris suburb of St.-Denis brought back memories of my own trip on Metro Line 13.
Thirty minutes from central Paris, France meets Africa in St.-Denis. Tourists are few, not unusual given that many Parisians associate this area with riots and car burnings that made headlines in 2005.
Most of the rioting, in fact, happened elsewhere in Seine-St.-Denis, a larger area that includes several towns, or communes as they're called, including St.-Denis. By day at least, St.-Denis itself has the feel of a French village, albeit one with a population of immigrants struggling with poverty and high unemployment. 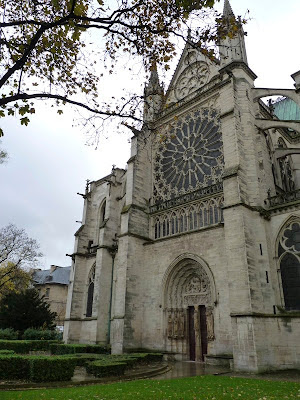 St.-Denis claims a special place in French history as the burial place of most of the country's kings and queens. Its historical centerpiece is the Basilique Saint-Denis, a Gothic cathedral, museum and national architectural monument named for Saint Denis, the first bishop of Paris who was buried here in 250.
With its purple and blue stained-glass rose window and flying buttresses, the church could pass for a smaller version of Notre Dame Cathedral in central Paris. For those who go beyond Place Victor Hugo where the basilica sits across from city hall, other surprises await.
A network of pedestrian streets come alive on Tuesdays, Fridays and Sundays when people from all over Paris come to shop at the Marché de St.-Denis, one, of the largest indoor market halls in Europe. 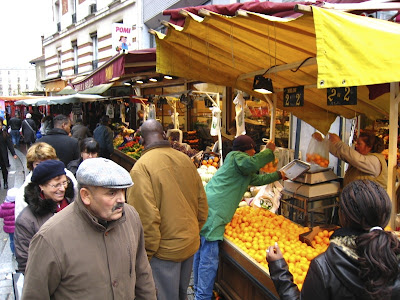 The glass cases at Au Royaume De L' Oriental display colored sweets made with nuts and honey. A woman fills crepes with a spicy vegetable combo while we settle in over glasses of mint tea. 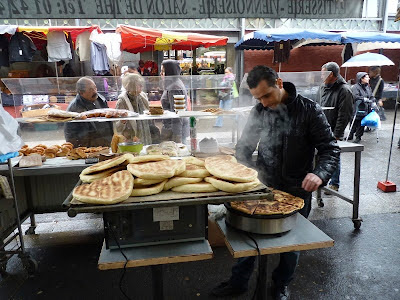 I spent a rainy morning exploring Saint-Denis with Michel Moisan, 59, a longtime resident and a guide with Parisien d'un Jour, an organization of volunteer "greeters" who take visitors on free walking tours through out-of-the-way Paris neighborhoods.
It was apparent from the time Moisan and I met at the Metro Line 13 subway exit that this was not the Paris of Michelin lore. We walked passed a tent camp on the steps of city hall. The demonstrators were protesting losing their apartments just days before a winter moratorium on evictions went into effect. 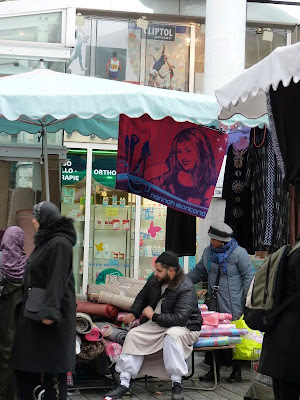 "Saint-Denis has always had a mixed population," Moisan explained. As the rural countryside became industrialized, immigrants settled in. A socialist workers' movement took hold, earning Saint-Denis the nickname, "la ville rouge," or "red city."
"Italians came in the 1930s, and the Spanish after that," Moisan said. Today, the population is largely Muslim, with residents coming from former French colonies in North Africa, the French West Indies and parts of East and West Africa. 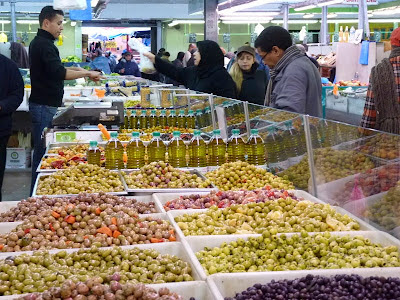 Inside the Marché de St.-Denis, Italian tripe sellers work beside Halal butchers. Outside, among stalls stocked with rugs and cheap clothing, vendors peddle corn roasted in grills fashioned from grocery carts. A historic wooden dyehouse, once part of a thriving textile industry started by King Louis XIV, houses a cafe and restaurant. At noon, we listened as church bells ring, and a merchant shouts "Insha'Allah," the Arabic phrase meaning "If Allah wills."
Saint-Denis developed a reputation as an important trading center in the Middle Ages after the French King Dagobert rebuilt Denis's original burial site into a royal monastery. According to legend, the martyred St.-Denis collapsed here after walking from his execution site in Montmartre, carrying his own head. More likely this was the area where he was beheaded.
Dagobert choose the abbey as his own burial site, and his successors followed. Forty-two kings and 32 queens were buried here from the sixth century on. Suger, abbot of Saint-Denis, enlarged the abbey in the 12th century, turning it into what became known as a masterpiece of early Gothic art. It became the model for the more well-known Notre Dame and other Gothic churches throughout France and England. 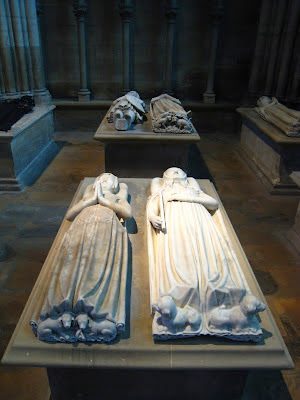 In 1789, during the French Revolution, the tombs were opened by workers under orders from revolutionary officials. The bodies were removed and dumped in two large pits nearby where they stayed until after Napoleon Bonaparte reopened the church in 1806. Today, elaborately sculpted statues positioned over the tombs stand in for the real royals.