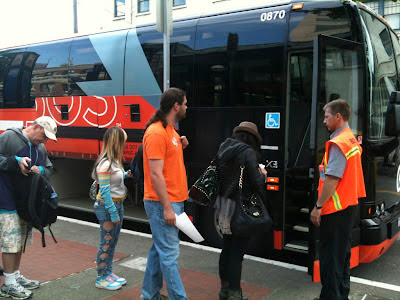 Greyhound's new BoltBus budget express bus between Seattle and Portland and Seattle and Vancouver is off to a good start. I road BoltBus one-way to Portland the other day and took Amtrak back. The bus ride took about three hours, 45 minutes less than the train, considering the bus arrived in Portland 15 minutes ahead of schedule and the train was 45 minutes late. 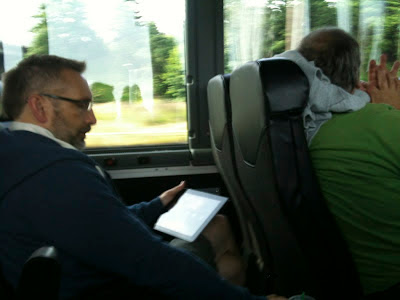 BoltBus promises at least one seat on every bus will be available for $1. Our bus was about half full, and no one I talked with bought their ticket for $1 (likely the person who did was a no-show), but lots of passengers paid just $8 (as I did) or slightly more. Read more here about how BoltBus compares to Amtrak in my story in The Seattle Times travel section. 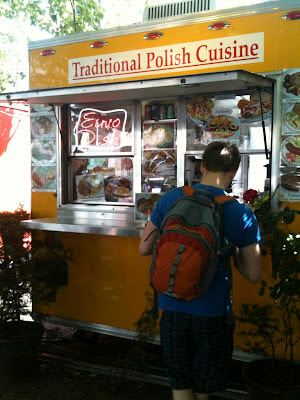 I had 2.5 hours to kill before catching the Amtrak back to Seattle, so I took the opportunity to try out some of Portland's amazing food carts for lunch. There are around 200 in downtown alone. After I put out a tweet asking where to eat, locals led me to a group of carts at 10th and Alder. Longest lines were at Nong's for poached chicken and rice wrapped in a paper packet. With a Thai iced tea, the total bill was around $8. Sweet, but not as sweet as my next stop, the original location of Voodoo Doughnuts, where 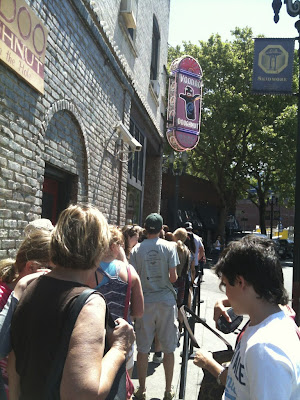 there always seems to be a line, even in the middle of the day. Tom loves their "Dirt Doughnut,''  a big glazed donut topped with peanut butter and crushed Oreos, so I picked one up to take back. 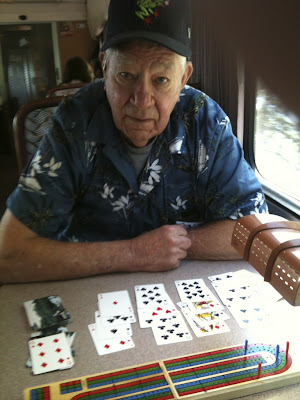 As fast, efficient and cheap as BoltBus is, I think I'll still opt for Amtrak most of the time. My ticket was more expensive - $34 with an AAA discount - so it was a splurge, for sure, but the ride was way more scenic and relaxing. I met this man in the bistro car where we talked over a couple of microbrews. He rides the train to visit his kids in Seattle, and always passes the time in the in the bistro car playing a combo game of cards and cribbage.

Either way - train or bus - taking public transportation beats driving or flying. Portland   has an excellent bus, streetcar and light rail system, so there's really no need for a car once you're there.