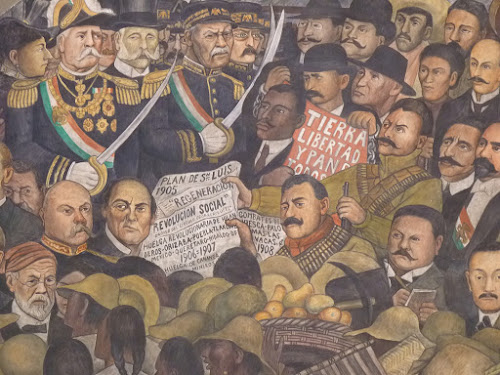 When we last visited Mexico City four years ago, Tom and I concentrated on three neighborhoods - La Condesa, St. Angel and Coyoacan - all areas with more of a village-like atmosphere than big-city feel. Spending time in any of these neighborhoods quickly counters the city's image of a hectic, smoggy and dangerous urban environment.

This time, at the end of an 11-day trip that took us by bus from Guadalajara to Zacatecas to Guanajuato and finally to Mexico City, we choose a bed and breakfast on the second floor of an office and apartment building in the heart of the Centro Historico, a few blocks away from the Zocolo and Alameda Park. The surprise: We again found ourselves in a neighborhood that was neither hectic, smoggy or dangerous. 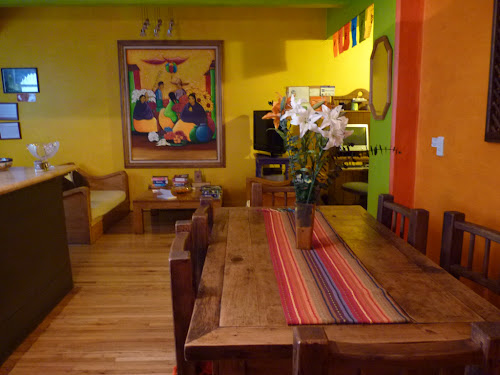 David Marino and his wife, Eloise, were our hosts at Chillout Flat on Simon Bolivar Street in a building where David's mother once lived. The couple live in the building and have converted four rooms (two more on the way) into a cozy, urban B and B in the heart of the Centro Historico, a 34-block area, home to some of the city's most elaborate historic monuments, former palaces, stores and museums.


A few years ago, I might not have considered staying in Centro, although we did on our first trip to Mexico City 30 years ago. Back then, we stayed in the Hotel Cortes, a convent converted to a budget hotel in a neighborhood that looked so scruffy we were tempted to turn around and get back in the shuttle that dropped us off from the airport. Now the Cortes is a luxury boutique inn near the Museo Mural Diego Rivera at the far end of a spruced-up Alameda Park.

Things are changing in Mexico City. Investors are buying up run-down or vacant former mansions and renovating them into boutique hotels and chic restaurants. The government is pumping money into traffic improvements, beautifying the parks and putting a huge police presence on the streets. It's not an exaggeration to say that literally everywhere we turned there were either uniformed police and/or private security guards inside and outside restaurants, stores and along a network of pedestrianized streets that were lively late into the evening.  Are there parts of Mexico City to avoid at night? Of course. But the Centro Historico is no longer one of them.


Faces new and old await. The photo at the top of this post shows part of a mural painted by Diego Rivera in the 1920s-30s inside the Palacio Nacional, open and free to the public although less often than in past years now that Mexico has a new president who spends more time there than did Felipe Calderón. Above is Restauant Padrinos, one of a handful of swank new restaurants occupying some of Centro's oldest former private palaces. Forget the chips and salsa. Think homemade bread and delicate fruit sauces severed over chicken or pork. Notice the " vertical garden," a project installed by a local architectural firm as part of a campaign to improve the city’s air. Upstairs from the restaurant is "Que Bo,'' a gourmet chocolate shop, specializing in six varieties of hot or cold chocolate. Ours' were spiked with chile pepper and cinnamon.

Part of the fun of staying in the Centro Historico was sampling and contrasting the new and old. Our B and B was around the corner from the 1912 Cafe de Tacbua, where mariachis serenade diners enjoying traditional dishes and pastries in a dining room decorated with colorful tiles, stained glass and murals. 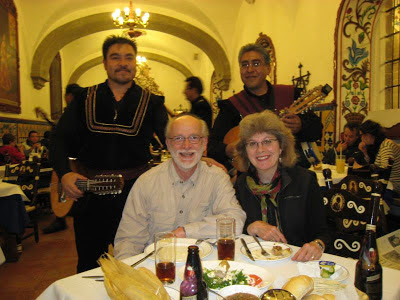 Another night we found the the Hosteria Santo Domingo, another old-fashioned restaurant known its  chiles en nogada. This is a delicious dish, normally reserved for Mexican Independence day in September. Poblano chiles are filled with a mixture of shredded meat, spices and raisins and topped with a walnut-based cream sauce dotted with pomegranate seeds, so that the whole dish represents the three colors of the Mexican flag.

This is the "Blue Tile House,'' built as a private residence 18th century, now a Sanborns department store. Sanborns is a chain of stores throughout Mexico, most with a throw-back feel to the 1940s when people not only shopped in department stores, but relaxed there over breakfast, lunch or dinner. Sanborns is owned by Mexican telecom tycoon Carlos Slim (a major New York Times investor), officially the world's richest man.

Even the post office is gleaming. We passed by this building on the way to catch a bus, and I did a double-take, thinking it was a museum. There actually is a small postal museum inside, but the building is mainly used as an everyday post office.


Eloise served such ample breakfasts that we actually only indulged once, maybe twice in churros and chocolate, a traditional Spanish breakfast, served like this for around $4 at Casa Churras, a bright, new cafe on 16 de Septiembre.

More of what's new: Bikes that can be rented with a credit card and picked up and dropped off almost anywhere.

Also Carlos Slim's new "vanity'' museum in the wealthy neighborhood of Polanco. We took the subway, then walked a little more than a mile to see the new Museo Soumaya built by Slim to house his art collection. 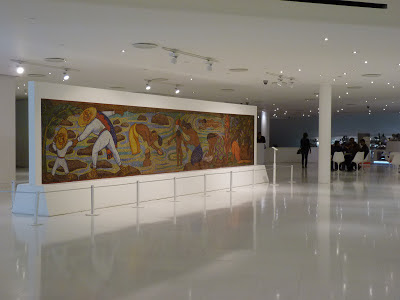 Mosaics by Diego Rivera stand out on the main floor along with a couple of  Rodin sculptures displayed against stark, white backrounds. 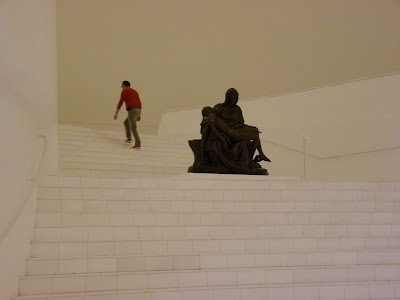 Worth a revisit was Casa Azual, Frida Kahlo's house in Coyoacan to see the newly-opened display of her clothing, previously locked away and out of public view. Like the Surmaya, Casa Azul is not easy to reach via pubic transportation, but it's worth the effort to sample a bit of the Coyoacan neighborhood. We took the subway to the closest stop, then walked along a street called Francisco Sosa that leads to secret gardens and Spanish haciendas hidden behind the walls of buildings painted pink, blue and ocher.

When Frida Kahlo died, Diego Rivera insisted that the places in her home where the majority of her personal effects be sealed for 50 years.  In 2004, museum workers opened the doors and found thousands of items, including more than 300 of Frida Kahlo's dresses, some of her jewelry, shoes, and orthopedic devices. The museum has room to display only a small number of items, but the explanations in English as well as Spanish are excellent.   Many of the dresses were designed to hide her physical disabilities, the result of polio and injuries suffered as a teenager in an accident in which a bus she was riding was hit by a trolley.

On our stroll back from the museum, we were happy to find El Jarocho still doing a brisk business in Coyoacan's little business district. Burlap sacks of beans rest next to a red coffee grinder on the sidewalk outside the shop that's been a neighborhood fixture since 1953.

I guess it goes without saying, but seems important to say anyway that we felt very safe the whole time, as we expected we would since we weren't traveling in border towns or elsewhere where there have been problems.

Mexico's a big place, and when you're there, among hundreds of people out dancing in the squares, eating in the restaurants, shopping, enjoying music and museums, you get a completely different and more accurate impression of everyday life than you do by reading many of the news reports and U.S. government travel warnings.