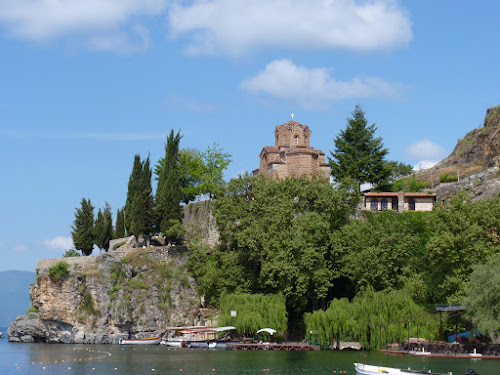 
We can't see Russia from here (sorry, Sarah Palin), but we can see Albania from the balcony of our inn overlooking beautiful Lake Ohrid in Macedonia. 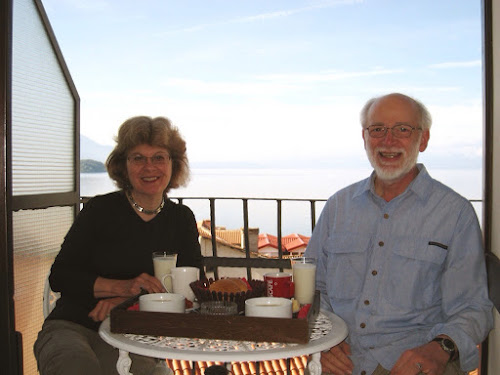 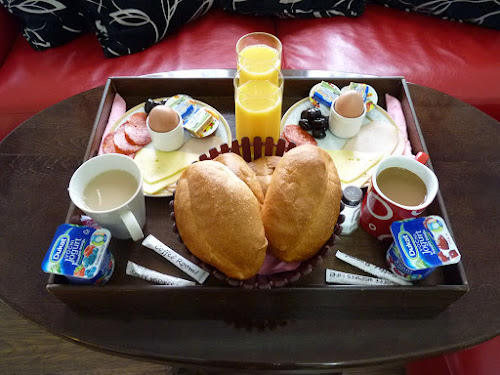 We left Skopje by mini-bus for a three-hour hop through the mountains to find out why nearly everyone who comes to Macedonia stops in Ohrid. This is one of Europe's oldest cities where stucco and stone houses and ancient churches built into hillsides look down on a three million year-old lake that stretches to the Albanian border. It won't be long before the little town will be flooded with tourists headed for the beaches, but it's quiet this time of the year, with restaurants and hotels just gearing up for the summer season. It poured down rain our first day, leaving us wondering how we would spend the next two. Then the sun came out, and we didn't want to leave. 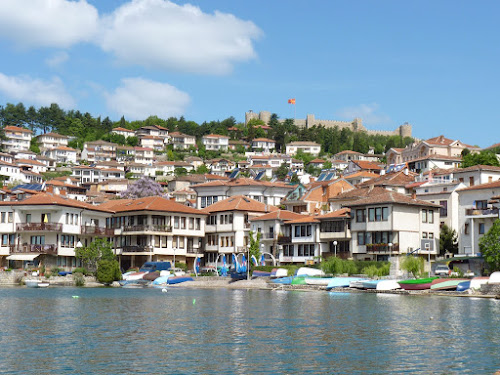 Lake Ohrid and castle walls above the Old Town


Our B&B, the eight-room Vila Mal Sv. Kliment, owned by a local winemaker, may be the best value of the trip so far. We're paying $75 a night for a spacious lake view room. Each morning, the young manager, Elena Mitrevska, who grew up in Ohrid and lives up the street, fixes a breakfast composed of traditional dishes, some of which she remembers her grandmother making. This morning it was a creamy porridge, white cherries in syrup, glasses of a salty yogurt drink, fresh bread, Avjar, cheese, coffee and tea. 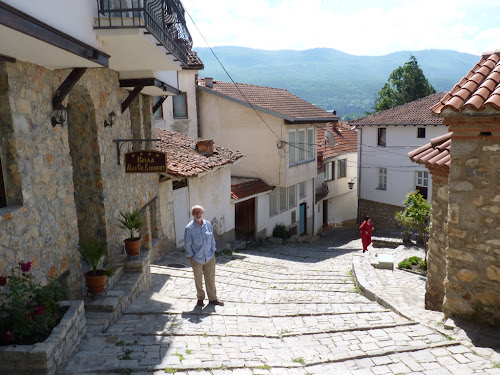 Reaching the inn involved pulling our suitcaes up this this steep street - one of the few original streets remaining in Ohrid. Notice the way the stairs are shaped to make walking uphill easier. The steps are slightly curved towards the inside so when it is raining the water runs down the middle. 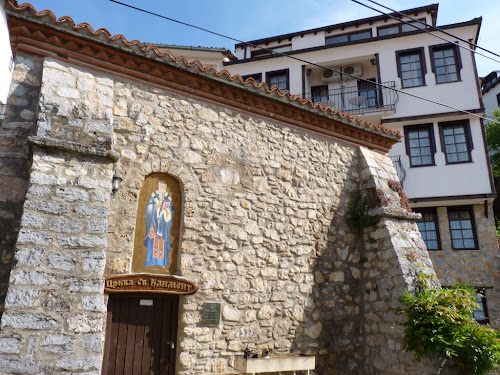 Our neighborhood chapel, with our B and B in back

Mal Sv. Klement translates to "Lessor (or little) St. Clement,'' the name of a 12the century chapel next door to our inn. The chapel is named for St. Clement, Ohrid's patron saint. The little church, named "lessor'' so as not to be confused with a much larger and important church at the top of the town, served as a hiding place for St. Clements' bones during the occupation of the Ottoman Turks. The church is kept locked, but if you ask, a local woman will come with the keys and open it. 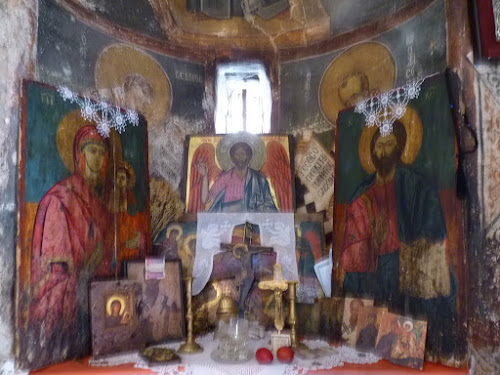 Inside are beautifully restored frescos, icons and a little boom box loaded with a CD of religous chants. Walk past here late at night, hold your ear to the the little window and you'll hear the music.
Orhid was an important Greek city in 4th Century BC, the former Macedonian capital and a key cultural and trading center, the home of St. Klement, a scholar and writer associated with the creation of the Cyrillic alphabet, still used here, along with Latin letters. Today, Ohrid is a resort destinaton, but also a working town with woodcarvers, paper makers and jewelry craftsmen working along side souvineer sellers. It's been fun just hanging out and meeting the locals, most of whom work in the tourist industry. Churches charge $1 or $2 to get in, but the money goes mostly to support the person hired to unlock the doors and provide information in English if needed. I loved this quote from the woman hired to be the keeper at the main St. Kliment's church:
"Pictures not allowed, lady. Everything is business. If they want to take pictures, they can talk to my boss and pay the money.'' 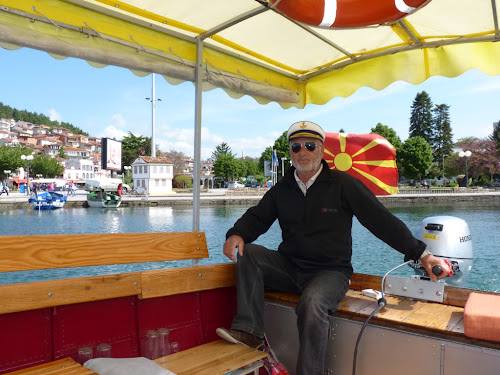 No problem. Everything costs less here. A coffee waterside at Nemo Pizza at the Hotel Aleksandrija is 50 cents. A small ice cream cone costs about the same. Beer is a dollar or two. A short taxi ride is no more than $2.

Instead of hiring a guide who offered his services for $50 for four fours, we decided to put together our own tour. We spread the $50 around to a couple of taxi drivers;, Captain Risto, above, who offers half-hour tours of the main harbor; and another young boatman who offers rowboat rides though Amazon-like wetlands on the other side of the lake, near the Sveit Naum monastery, now a luxury hotel near the Albanian border. 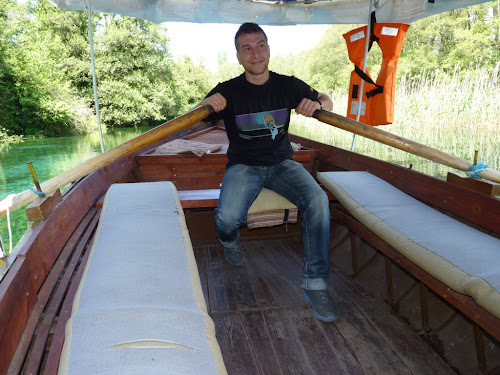 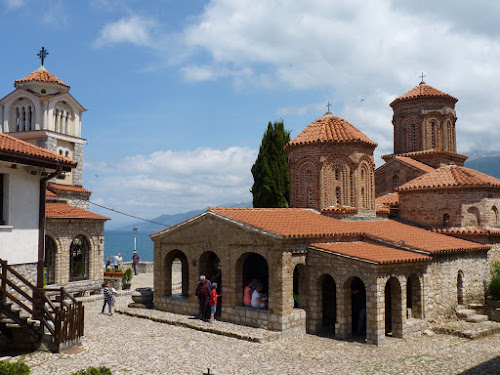 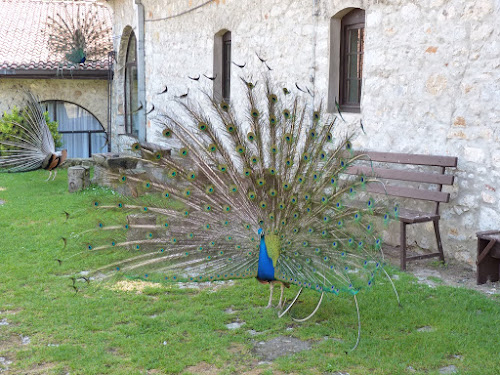 Next: The ethnic melting pot of Bitola and a pay-whatever-you want village stay.
Posted by Carol Pucci at 12:11 PM