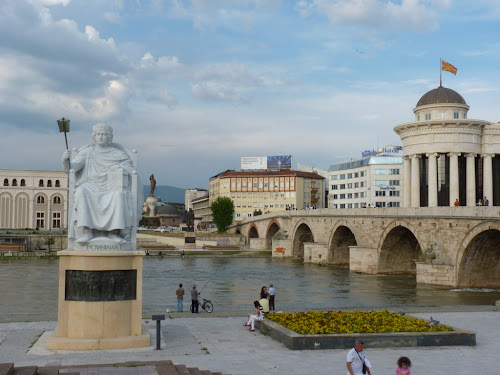 Disneyland Not, although it could be...or maybe the Bellagio in Las Vegas, a slice of Ancient Greece or Rome, even Paris. We're in the Macedonian city of Skopje, one of the quirkiest capital cities in Europe. Skopje is in the midst of a massive four-year makeover project called "Skopje 14, calling for reconstruction of the heart of the city, with new museums and government; new bridges; and dozens of huge statues dedicated to ancient kings, war heroes and religious leaders. 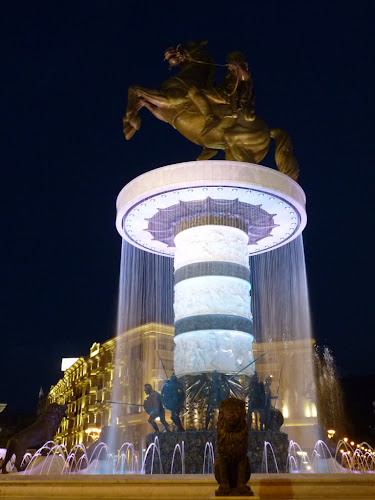 We walked into this scene after an eight-hour bus ride from Belgrade. The taxi driver dropped us off on Macedonia Square where a giant statue of war hero Alexander the Great sits in the middle of a large pedestrian plaza. Lions spit water every few seconds, and lights change the color of fountains raining down on soldiers brandishing shields and swords.

Officially the statue is called "Warrier on a Horse,'' so as not to offend Macedonia's Greek neighbors who also claim Alexander as their hero. Recorded classical music blares until the lights go off at 10:30 p.m. A giant TV screen alternates advertisements with videos of scenic Macedonian vacation spots. It's all a kitchy display of national pride that some say has gone too far, given the cost - $208 million  euros of mostly government money so far - in a country with double-diget unemployment. Maybe, but when completed, it will certainly put Skopje on the map of cities worth a visit. 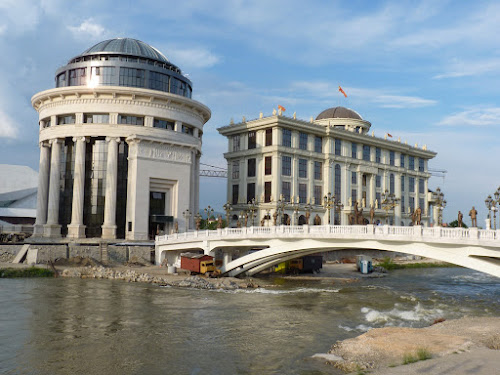 The building on the far right will be the new ministry of foreign affairs. Behind is the current opera house, older and more in keeping with the kind of architecture you'd expect to see in a former Communist capital. Statues of writers and poets and faux gas lamps decorate the new bridge built across the Vardar River dividing Skopje's old and new towns. 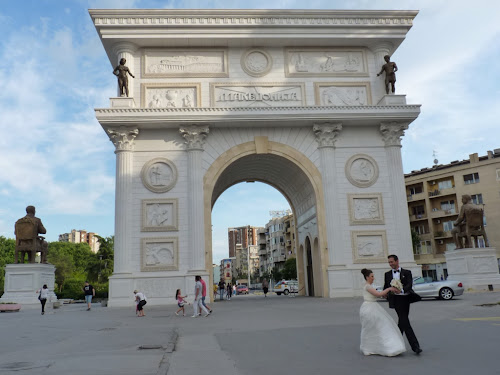 The Arc de Triomphe? No. It's the new entrance gate to Macedonia Square, a perfect backrop for this couple's wedding photo, and also the finish line for the recent Skopje Marathon. 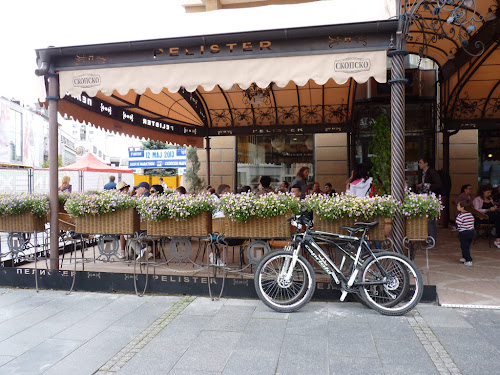 A Paris cafe? No. This is the terrace of the Pelister Restaurant, filled night and day with hundreds of tourists and local families who love its huge menu of pizza and pasta dishes. Above the restaurant are apartments and a six-room boutique hotel where we booked a room for $100 a night, including an anything-you-want -to -order breakfast in the restaurant.

Macedonia is our fourth country so far on this trip, so it meant another change of currency, this time to the dener or "den,'' each worth about 47 cents U.S. Everything here seems cheaper than in Serbia or Montenegro. A taxi ride from the bus station was $2. A beer, coffee or Coke at one of the riverside cafes is around $1.50. Dinners for two at a nice restaurant runs around $20. Portions are so big, we order just one of everything and share. Our first night at the Pelister, for instance, we shared a platter of grilled veggies, a pizza, a chicken dish, water and two beers for a total of around $22. 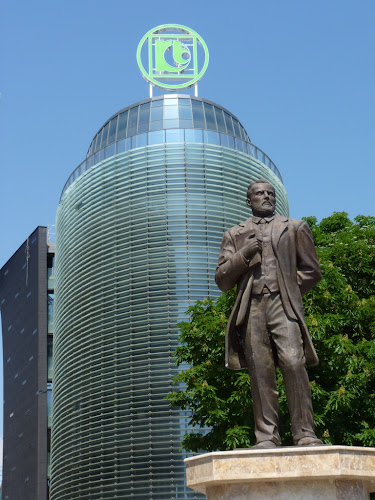 An earthquake in 1963 destroyed many of Skope's historic buildings, leaving the city with a mix of whatever survived, mostly a lot of ugly Communist-era architecture or nothing at all. Yugoslavian President Tito hired a Japanese architect to redesign much of the city, but most of his plans never materialized- one reason for Skopje 2014 which began in 2010. Much of the project calls for new buildings, but a few existing buildings will get new facades. The views are different, depending on which way you are facing.

These are the two different views of the city from the poets and writers bridge. 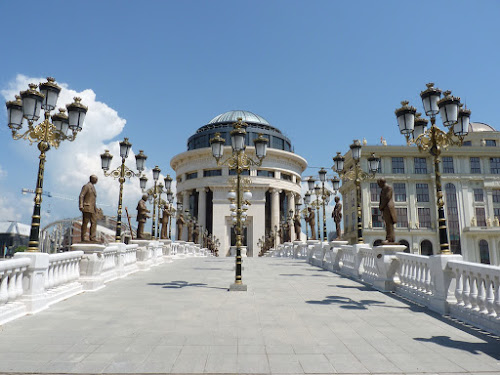 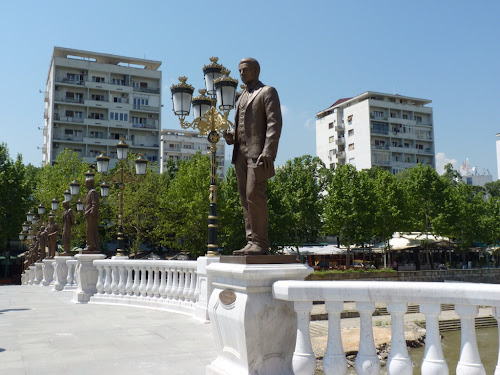 Across the river is a castle, more new statues and fountains, a few more new buildings and the Carsija, a (real) Ottoman-era neighborhood that feels like stepping into a small town in Turkey. 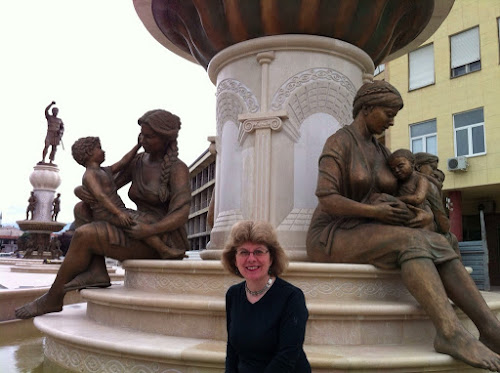 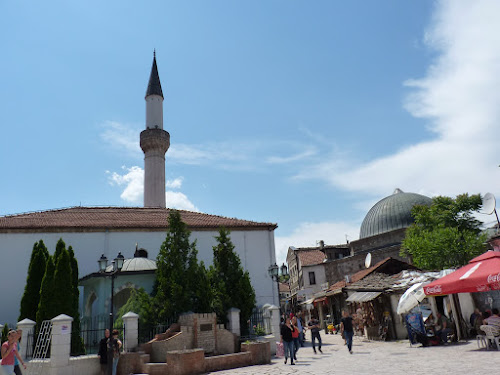 Skopje has a large Albanian Muslim population. Albania is next door, and Kosovo is nearby. From the bus window on the way to Macedonia from Serbia, we started seeing a large number of mosques and minarets. 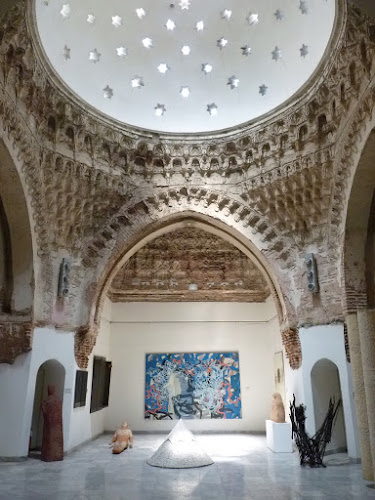 This 13the century former Turkish bathhouse houses the City Art Gallery. Walking through this area, past shops selling nuts or gold jewelry or bread or wedding dresses, we noticed more women wearing head scarves and heard the call to prayer as well a church bells. 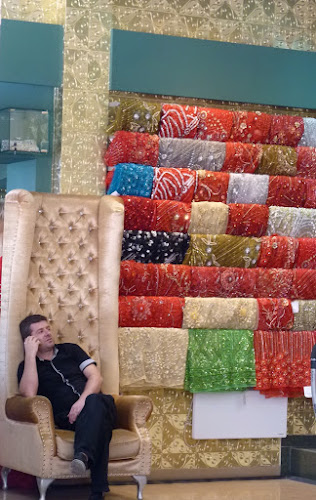 The Carsija is also the place to sample traditional Turkish foods such as bureks, pies made with a flaky dough and filled with meat or cheese and spinach; beans baked in clay pots and grilled sausages stuffed into giant circles of bread. We met Imir, below, as we were walking. He grew up here, but would like to leave and dreams of one day joining an aunt in New York and helping her run a fast food restaurant.

His take on the new Skopje: 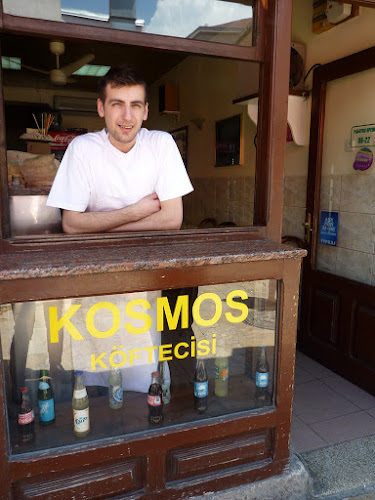