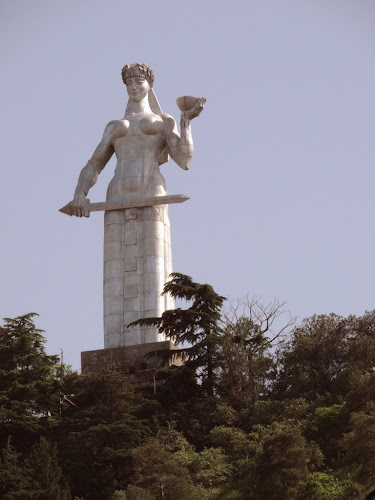 Tbilisi is a nearly 2,000-year-old city with a 21st century vibe. Built on two sides of the Mtkvari River, surrounded by mountains on three sides, it has almost a village-like feel, with people living and working in the narrow alleys and crumbling houses in the old town, and in elegant 19th century and Communist-era buildings in the newer areas. Looking down on it all is the "Mother Georgia,'' offering protection and a national welcome, symbolized by a generous bowl of wine. 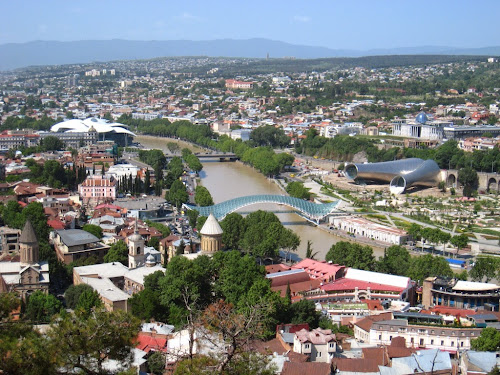 The architectural contrasts are amazing. Pictured above is the glass and steel pedestrian Peace Bridge, designed by an Italian architect. It faces a controversial new theater complex called "Two Tubes,'' still under construction. Above the tubes is the home of the former president, its future use undecided. The building that resembles white mushroom caps is a government administration building. Mixed in are historic Eastern Orthodox churches with pleated umbrella -shaped domes, some plated in gold, and all topped with a cross. 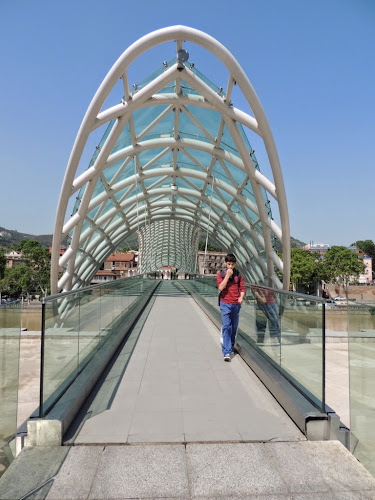 All the monuments are lighted at night, making the city feel safe and alive. Restaurants and cafes stay open until 2 a.m. A cable car ride, built in 2012, connects the river with the Nariqala hilltop fortress. Lighted fountains "dance'' to piped-in music at night on Europe Square, a paved park-like prominade that houses a giant, white piano, a gift from former French President Nicholas Sarkozy. 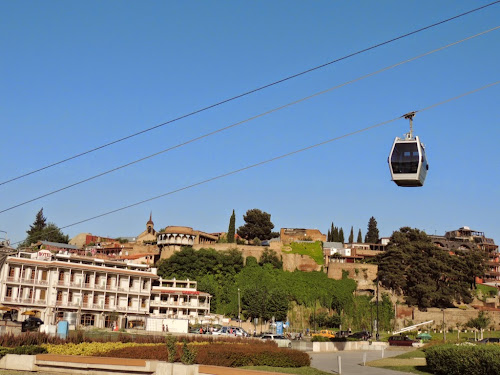 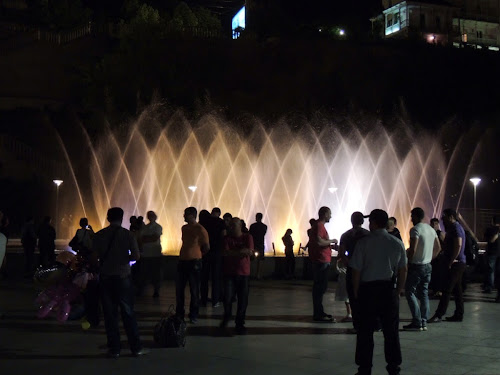 This is a city best enjoyed by walking around to see the various sites, and taking the time to bump into the unexpected. We stopped to talk to an Orthodox priest, Father Michael, dean of the Kashevit Church, on what turned out to be "Family Values'' day in Tbilisi, a day apparently declared to counter a gay pride celebration that took place last year on the same date. Hundreds of police were out on the streets this year, but things seemed quiet when we stopped to ask Father Michael what was going on. "This is a very tradtional country," he explained. When it comes to Gay marriage, adoption etc. "Think opposite of yours.'' As we talked, several people came up to him for a blessing. Behind him is the Marx, Engles, Lenin building, built on the site of a former church that was demolished by the Communist government. 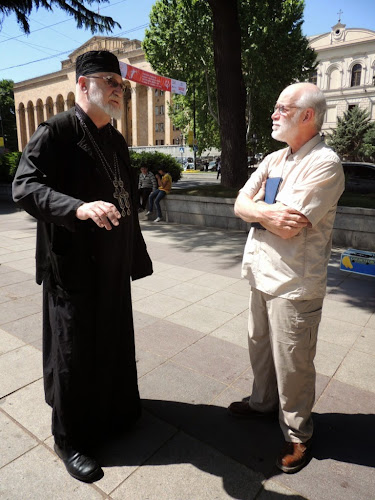 We've been enjoying all the cultural activities Tbilisi has to offer. Below is a "clock tower'' built by Rezo Gabriadze, an arts patron and the artistic director of the Gabriadze Theatre. The theatre 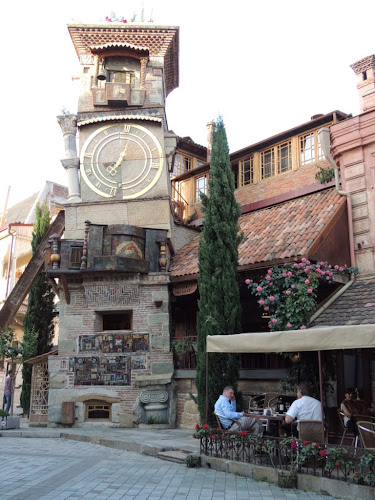 specializes in marionette performances that take place in a small theater that feels like it could be somewhere in Paris in the 1920s. For about $8, we saw a play titlted "The Autumn of My Spring." The protagonist was a little bird who stole money to help an elderly woman, and was "sentenced'' by a court to spend the rest of his life in window of a pet store. Hilarious. 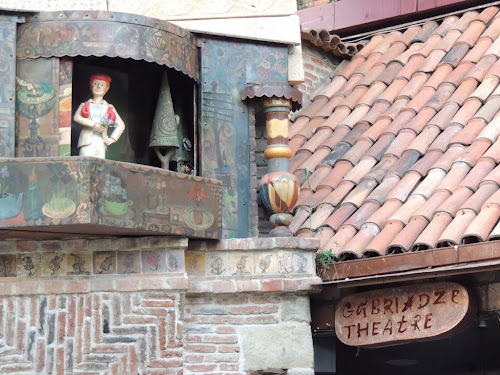 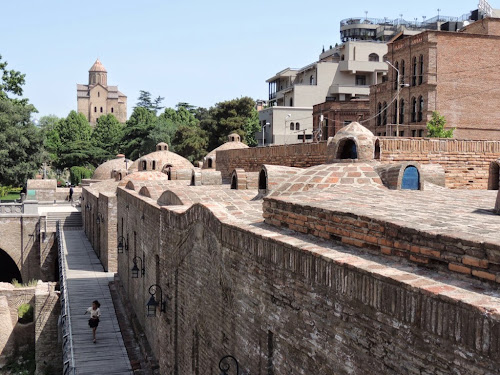 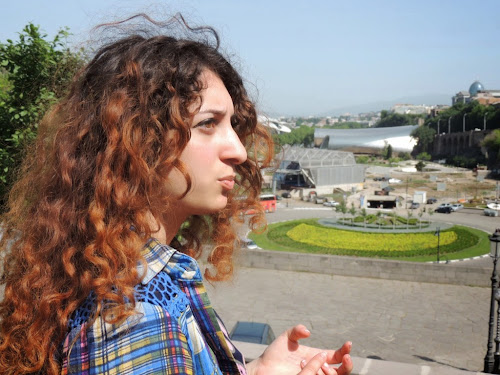 Tbilisi translates to "warm'' in Georgian, a name said to have come from hot springs flowing under the city. Above are sulfar bath houses, recently restored, in a district called Abanotubani. The small domes are at ground level. The baths are below. We're still investigating the ins and outs of going for a soak. Some have private rooms where men and women or families can go in together; others are public and separated.
We first saw these with a guide from Envoy Hostel which offers 2.5-hour walking tours for the bargain price of $5. We were the only two people to sign up that day, so we had what amounted to a private tour by 21-year-old college Ia, short for Violet, pictured above. Like many Georgians, she has a long last name, about to get longer. Her last name has been Davitishvili, she explained, but is about to become Bagration-Davitishvili, reflecting two families, both descended from a 9th century royal dynasty that split apart long ago and are coming together once again.
The old town's main streets are tree-lined, and the whole city feels very green. Sidewalk wine tasting is common on street corners. Kitchy restaurants, like the "KGB Is Still Watching You,'' attract crowds into the late evening. 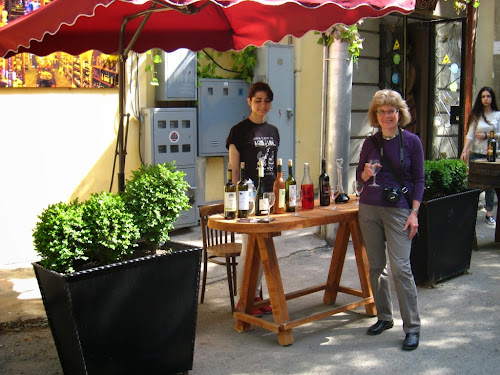 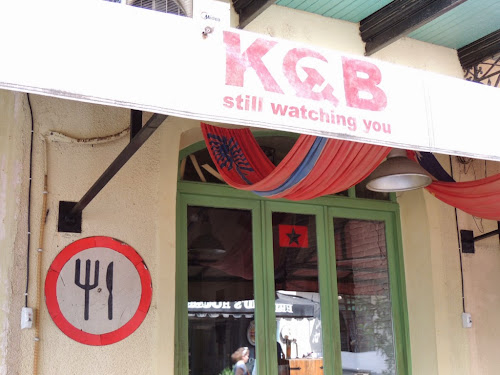 While much has been restored, the majority of old buildings are crumbling, or at least that's how it looks from the outside. Inside, it's often a different story. 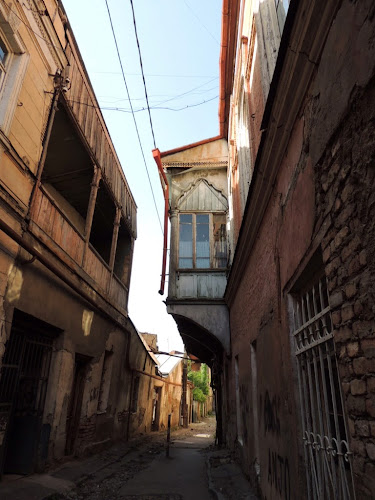 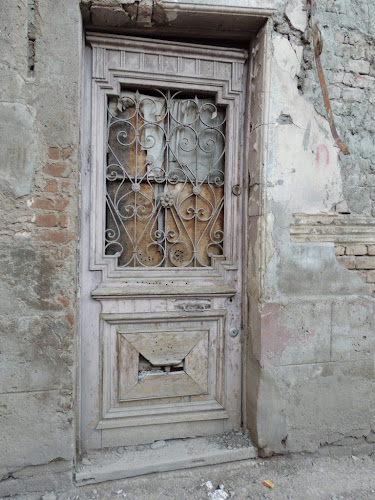 The Pur Pur restaurant, below, is a good example. To find it, you wander down a street past rows of what look like abandoned buildings with peeling paint and broken out windows. Across the street is a park where kids kick soccer balls, and men play backgammon in the afternoons. To find the restaurant, you enter a tall open doorway and climb of flight of slanted wooden steps. Walk past a broken mirror and through another 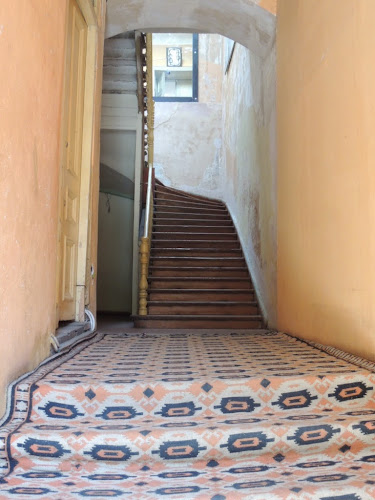 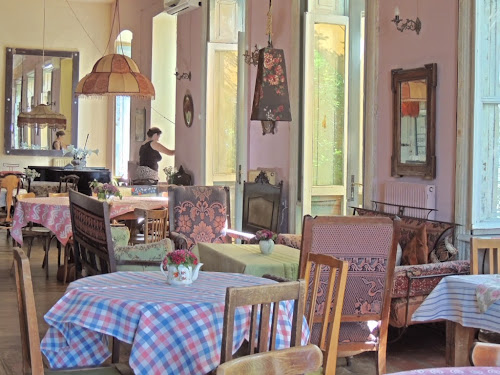 set of wooden doors into an elegant dining room that could be someone's finely-decorated home. Notice the vintage lamp shades and missmatched table coverings. We had a memorable $30 (expensive by Georgian standards) lunch here while listening to backround music by Leonard Cohen CD. Straying from the usual Georgian kitchen, we ordered a salad of fresh greens with a side of soft cheese flecked with sun dried tomatoes. Next came a delicate ravioli filled with fresh spinach. Tom had a slice of a caramel cake and we shared a half-carafe of white wine. A long, relaxing lunch it was, a reward for walking about seven miles that day. 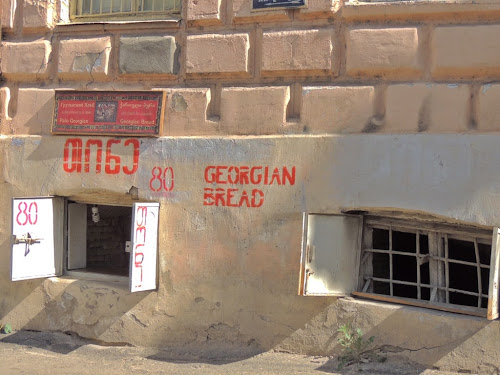 Many of the old town shops are underground - literal holes in the walls! This is a bakery where goods are passed to customers through a little window. Other shops - small grocery stores etc. - are entered down a flight of steps. 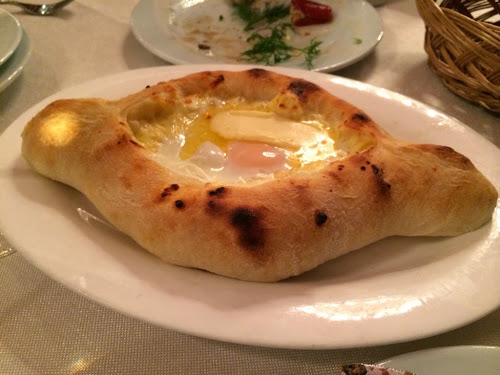 Speaking of the "Georgian Kitchen," this dish has become one of our favorites. It's called Khacapuri Acharuli, a boat-shaped piece of bread, filled with melted cheese and butter and toped with an egg which you "scramble'' with your fork, then eat by breaking off chunks of bread and dipping. Since we hardly ever eat bread or butter at home, we're giving ourselves permission to induge! 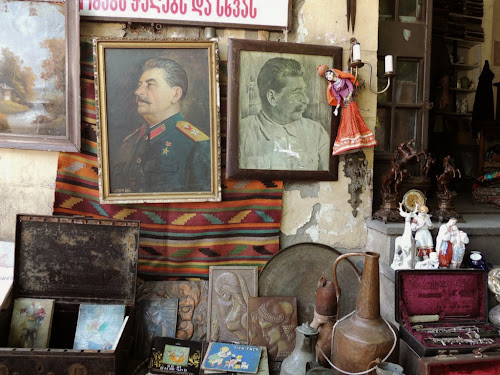 We spent several hours wandering around a flea market that takes place daily in a park near the Dry Bridge. Tom was searching for a tradtional silver-rimmed wine cup made from a bull's horn. He and this vendor had a good time hagging over the price which turned out be about $8.50. 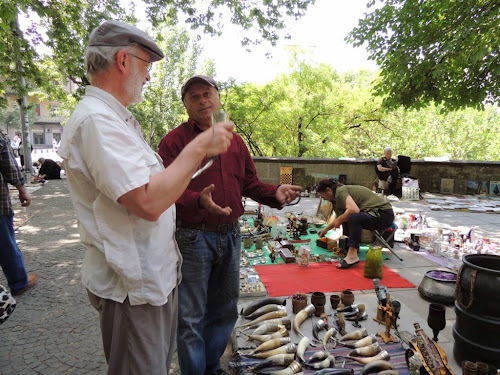 Next: Into the countryside for lunch and dumping-making with a Georgian family.