Food for Men and Other Treats in Tbilisi 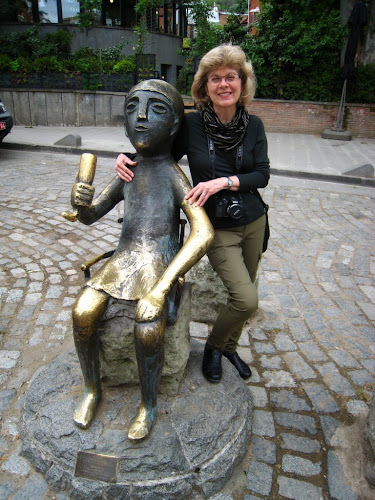 Let's just cut to the chase and talk about food and wine. We arrived in Tbilisi on a 3:30 a.m. flight out of Istanbul, got our taxi (saw the Big Grape statue, actually a bunch of grapes, along the highway at the airport exit), checked into our hotel and woke up hungry. Breakfast, courtesy of the wonderful family at the Silver Hotel. They got up in the middle of the morning to great us, and a few hours later laid out a spread of white cheese, ham, olives, yogurt, tomatoes, cukes and an omlette. That held us until we went for a stroll and folllowed our noses to the smells coming from an underground bakery next door to a fake Starbucks. 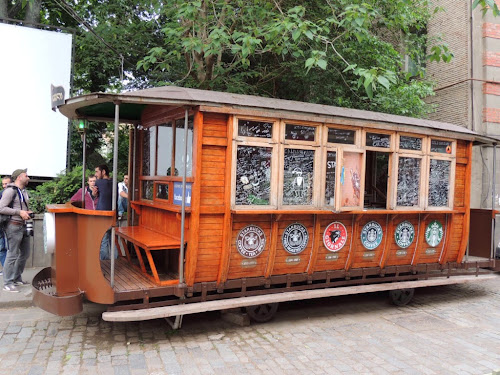 There was no sign, but we watched as people descended a flight of stairs, and surfaced carrying delicious-looking pastries. Down we went, and found a huge bakery in the basement of an old building. Women were kneading dough and pulling hot loaves out of wood-fired ovens in what it turns out, is a bakery built by the Germans in the 1800s. 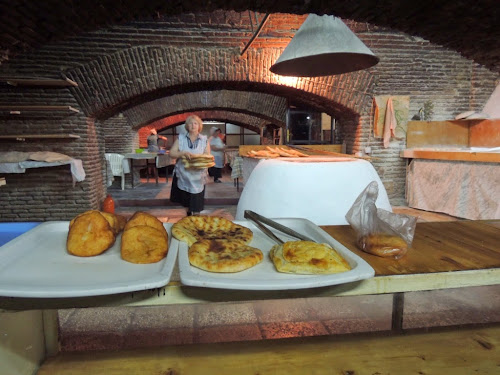 We had our first kachapuri, a circular piece of bread filled with cheese or meat, and in this case, sweet cream. The "Starbucks'' is in an old trolly car, decorated with knock-off logos. There was a bar inside, one giveaway that this was not the real thing, but who can fault such a group of creative entrepreneurs. We didn't order coffee, but had a nice chat over a beer at a cafe across the street with a traveler named Brian who lives in Lynden, Washington! Small world, as they say. After being laid off, Brian decided to travel and study Russian in a part of the world where his dollars would stretch. 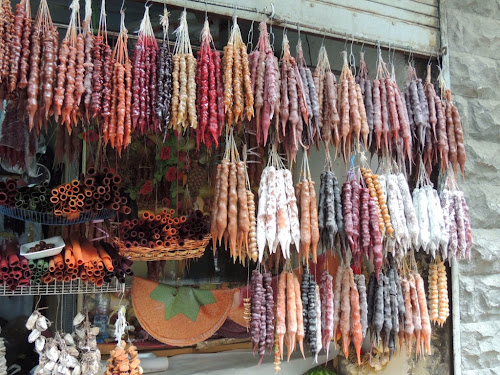 I've been looking for foods that I read about before our trip. At first glance, these look like candles or sausages, but they are a traditional Georgian snack made from either walnuts or hazlenuts dipped in various kinds of grape juice. Locals call them "Georgian Snickers." We've yet to try one, but we will. 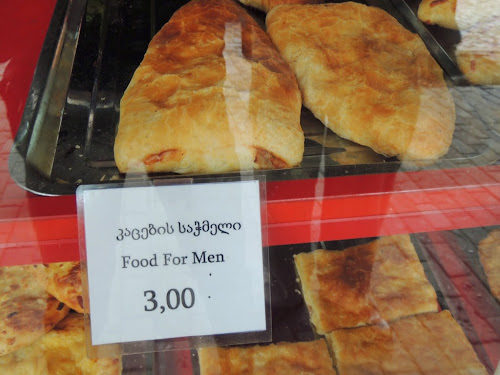 There's no way the average visitor could read written Georgian, so nearly everything is written twice, once in Georgian and once in English. The translations are interesting. These pies were bigger than the others, and filled with meat - thus "Food For Men.'' 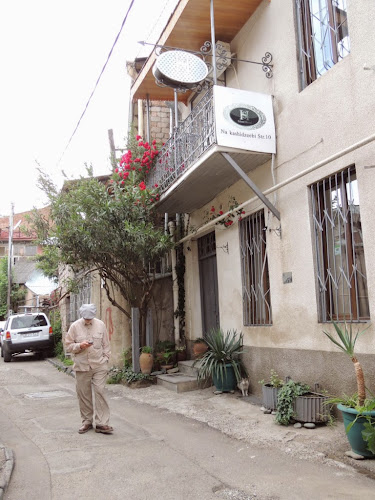 This is the SIlver Hotel where we're staying in a spacious "suite,'' a bedroom, hallway with table and chairs and a nice little bathroom with a shower and toilet. It's owned by a family whose daughter, Marika, speaks excellent English. Besides helping her mother out with the hotel, she works at a full time job for a food company. We're paying about $90 a night, high compared to the cost of other things, but worth it. Most museum entraces are $2. A large local beer costs about the same or less. We had a fantastic vegetarian dinner our first night with all the local specialities - eggplants stuffed with walnuts; spinach and nuts; and dumplings filled with cheese and mushrooms - for $20, including teriffic Georgian wine. 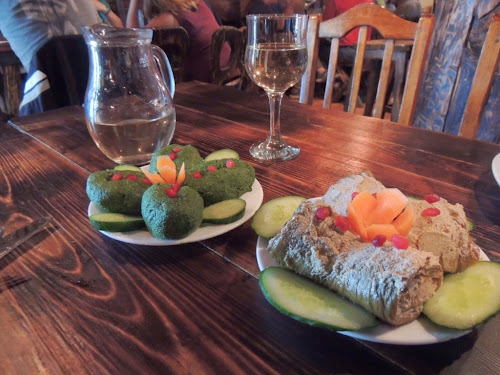 Much of the old town is being restored and gentrified, but many of original wooden buildings remain untouched. Our street doesn't look like much, but it's surrounded by beautiful Georgian Orthodox churches, little cafes and restaurants and is around the corner from Freedom Square and the start of Rustaveli Avenue, an elegant main street lined with musuems and government buildings. 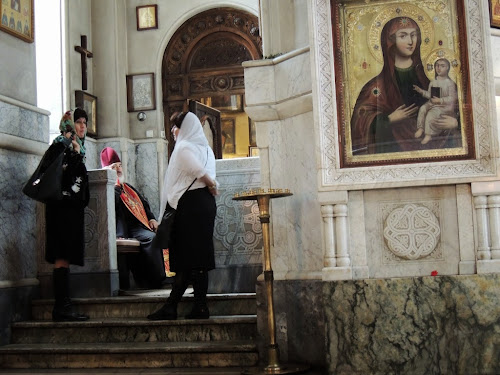 The primary religion is Georgian Orthodox. Churches are elaborately decorated with icons which people use to worship instead of statues. This church was built in 1910 as a copy of a church of the 11th century. We're taking a two-hour walking tour tomorrow led by a guide for one of the youth hostels. It should give us a better insight into all we've seen in our first few hours in town. A visit to the Museum of Soviet Occupation helped us understand why Georgians are so concerned about what is happening in the Ukraine and Russia. The text above, written to explain how the Russian Bolsheviks justified the Soviet occupation of Georgia in 1921, could have been written today in respect to Russia's land grab in the Ukraine. The Democratic Republic of Georgia, which delcared its independence from the Russian Empire in 1920, fell under Soviet occupation in 1921 when the Red Army entered Tbilisi under the guise of "protecting the rebels" in a neutral zone inspired into rebellion by the Russians. It wasn't until 1991 that Georgia became a democratic republic once again. Proud, happy and enthusiastic, Georgians are moving forward.
Posted by Carol Pucci at 11:57 AM