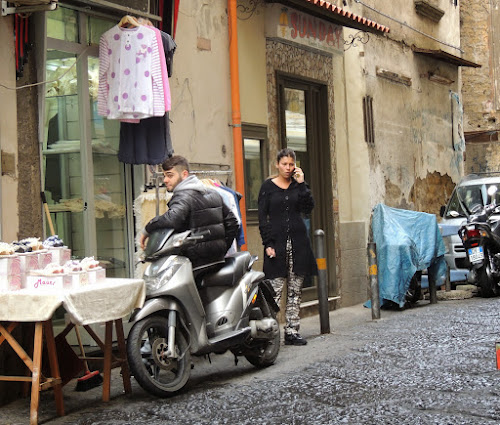 Pizza was what we were craving, and at a sidewalk cafe shaded by pastel buildings and palm trees, we settled in for lunch and our first impressions of a city most Americans equate with noise, crime and mass confusion.The pizza lived up to its reputation.

Naples claims to be its birthplace, and the best are simple wood-smoked pies sprinkled with basil, fresh tomatoes and buffalo mozzarella. The surprise was the scene that unfolded around us. It was nothing like the grungy, hang-onto-your-bag Naples I had been expecting.

Tom and I watched a shopkeeper arrange a window display of high-heeled shoes in shades of shocking pink and lime green. Waiters in white shirts and black vests rushed drinks to a group of businessmen a few tables away. And when I asked where I could find a store that sold English-language books, someone pointed out Libreria Feltrinelli, three floors of books, music and videos to rival the biggest Barnes and Noble.

Guidebooks and Internet postings warned of drive-by bag snatchers and scooter gangsters, but this was Chiaia, a refined seafront quarter of 19th-century buildings and art-deco style palazzi in what might be considered "modern Naples" in a city with 25 centuries of history. The worst problems I witnessed were cellphone conversations cut short by revving Vespas

These were my impressions of Naples when we visited for the first time a few years ago. It quickly became one our favorite Italian cities. We try to stop over whenever we are in Italy, so here we are again, a few days before a story assignment on the Amalfi Coast. As I write this, I'm taking in the scene from our balcony at the Hotel Il Convento in the Spanish Quarter, a warren of steep, narrow streets crowded with motorcyles and shaded by flapping laundry. Chiaia this neighborhood is not, and that's OK with us. We've wanted to try out Il Convento for some time to find out what it's like to stay in a less refined, but still lively and more central part of Naples. Below is the "view" from our room. 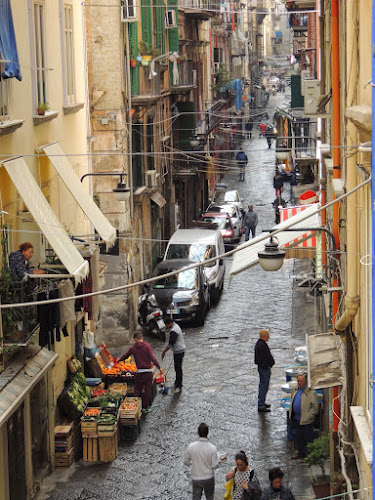 The hotel has 14 rooms inside a restored 500-year-old mansion facing the chapel and convent of Santa Maria Francesca, the former home of a Catholic nun who is the patron saint of pregnant women. No need for an alarm when there are church bells to wake us up at 7 a.m. Mass is held there most mornings. Afterwards, the nuns hold court in an upstairs museum where women come to seek their prayers for fertility and successful births. 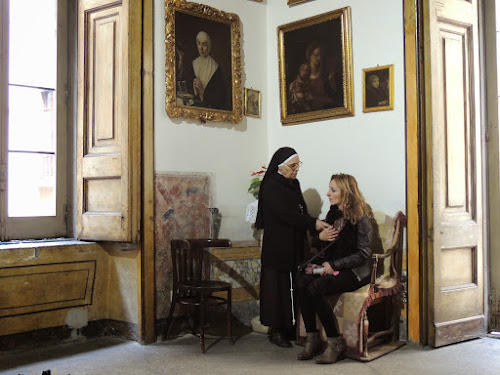 Motorcycles whizz up and down the street most of the day and into the night. Dogs bark, and soccer fans cheer and blow their hornes at all hours, the reasons why we found two sets of earplugs placed at our bedside. Our neighbors are fish mongers, butchers and storefront vegetable sellers catering to working-class residents living along streets barely wide enough for one car. The neighborhood is just steps uphill from Via Toledo, a main pedestrianized shopping street lined with pastry shops, cafes and chic clothing stores stocked with sparkled sneakers. Walk here in the afternoon, and you will share the street with the after-work crowd sipping orange cocktails at sidewalk bars. Stroll Via Toledo on a Saturday night and the crowd is mostly teens and 20-somethings doing last-minute shopping at H and M, followed by a late-night snack of gelato or a cone of fries eaten curbside. 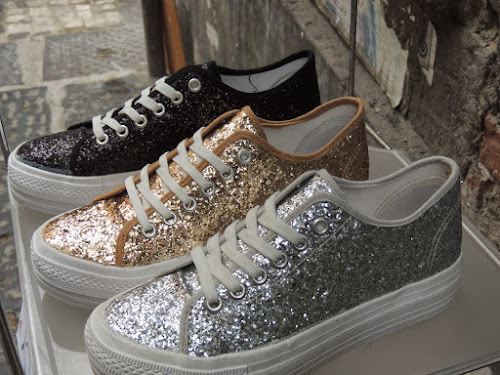 Dinner our fist night was at the Hosteria Toledo, a cozy neighborhood place that fills up fast with locals. We sat by the window, people-watching, as we ate an antipasto composed of a dozen grilled veggies, followed by a platter of fried bell peppers, a split order of penne with smoked mozzarella, tomatoes and fresh basil...and later, for Tom, licorice and cannoli-flavored gelato! Add a little wine, water, tax and tip and our bill came to around $35, an example of how far the dollar stretches these days against the falling value of the euro. As the Italians say, "Dieta domani," - Diet tomorrow! 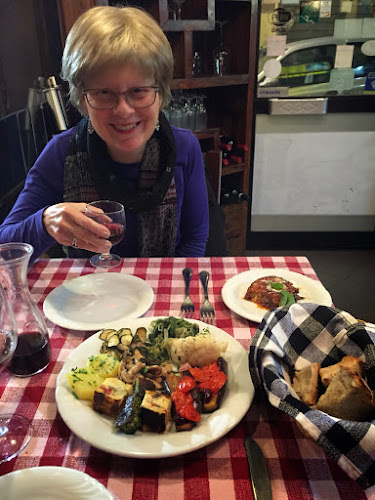 Ruled first by the Greeks, then Romans, Normans, Spanish and French, Naples is divided into 21 zones, each with a collection of monuments, palaces and Gothic and Baroque-style churches, whose plain facades hide interiors filled with frescoes, paintings and elaborate marble works. The Spanish Quarter was developed in the 16th century to house Spanish occupying troops. 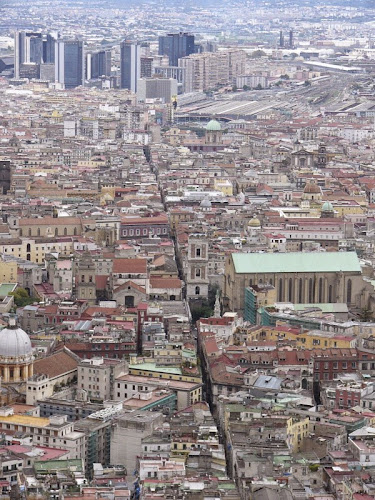 We met an Italian friend for lunch near Spaccanapoli, or "Split Naples," the name for the oldest part of Naples, a square-mile area at the heart of the original city, and also the name for the three-mile-long street first laid out by the Greeks that literally divides the center in half.

Mozzarella delivery trucks and motorbikes share streets no wider than alleys with chestnut sellers, pizzerias and stalls stocked with religious icons and souvenir bottles of lemon liquor. Its narrow lanes and piazzas were once a haven for bag-snatching scooter thieves, but much of the area is now off-limits to most vehicles, and Spaccanapoli has become as close to a tourist area as Naples can claim.
Laundry hanging from balconies and vendors hawking figurines depicting a hooked-nose Neapolitan mascot called a Pulcinella are charming symbols of traditional Neapolitan life. But the neighborhood's real treasures are its artisan workshops and its collection of Baroque churches steeped in religious symbolism and mystery.

Apart from being approached by someone selling bootleg cigarettes, it's unlikely that tourists will have any contact with the Camorra, the Neapolitan version of the Mafia. Taking normal precautions (No wallets in back pockets or taking cell-phone selfies on crowded sidewalks), we've been exploring everywhere on foot and on the Metropolitana subway line where many of the stations are decorated with flashy art installations.

Food itself is considered high art, heavy on the red sauce, eggplant, tomatoes, capers, anchovies and other local seafood as opposed to the cream-based, pesto and meat-driven dishes in Northern Italy. Naples is known for producing the best coffee in Italy (some credit the water), and of course, the best pizza. Our friend, Gianna Fusco, who teaches American studies and English in Naples, met us at Osteria Pisano, a little-family owned place near the cathedral, where we ate sautéed octupus, fresh anchovies and slabs of broiled swordfish. No worries about calories when eating like this! The walking helps too. Our fitbits showed we did 20,000 steps our first day out, about 10 miles, and the same the next day.

Gianna teaches at a university near the Duomo, the cathedral of Saint Gennario, named for the patron saint of Naples, believed to protect the residents from eruptions of Mt. Vesuvius. We'll miss by just a week a celebration in May when a sample of the saint's blood liquifies, a mystery believers credit to a miracle, but scientists say is more likely caused by a gell-like chemical easily availlable since antiquity. Oh well, onto modern-day miracles. Strangers are buying coffee for other strangers in a rivival of a pay-it-forward type of scheme called caffe sospeso or "suspended coffee" popular during World War II. 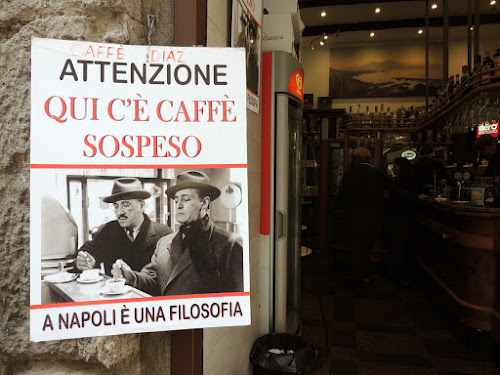 Cafes like this one on the Via Tribunali encourage their regular customers to pay for an extra coffee when they order, then donate the receipt which the cafe keeps until a needy person comes in and asks if a "caffe sospeso'' might be available. If so, he or she gets an espresso at no charge. Naples' fanciest caffe, the Gran Caffè Gambrinus, collects the receipts in an oversize coffee pot, with explanations in six languages. But those looking for a free caffeine fix might do better elsewhere. The cafe was overflowing with well-dressed customers the day we dropped by, but the pot was empty. 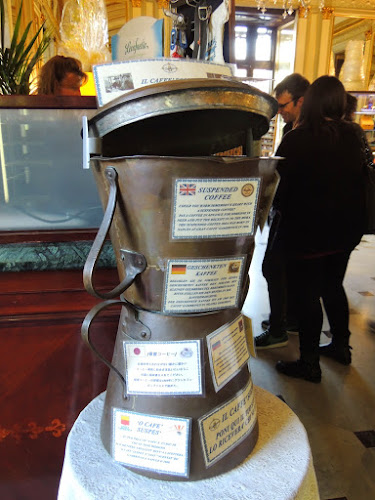 If all of this sounds exhausting, Naples makes a convenient jumping off point to peaceful islands. Capri is the most popular, but with so many day-trippers, it's hardly peaceful. Lesser-known Procida is just 40 minutes away by ferry. We found it almost too quiet on a Saturday afternoon in April. If the scene below looks familiar, it may be because you saw Il Positino or The Talented Mr. Ripley, both of which were filmed here. The architecture and views put us in the mood for the Amalfi Coast where we're headed next. 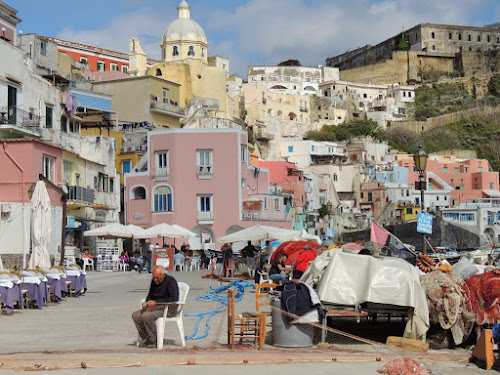