The Amalfi Coast: It's made for walking


The best way to experience any city is by walking. Driving Italy's Amalfi coast is something many travelers think they want to do until they try it, then find they are too stressed by on-coming buses, motorcycles and cars to take thier eyes off the road. 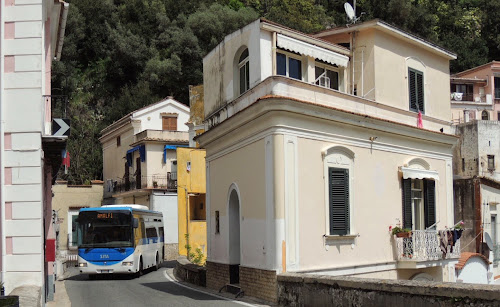 The Amalfi is famous for its steep coastline, with cliffs and ravines plunging to sea level. A two-lane, 43-mile stretch of highway cuts through the mountains between Sorrento and Salerno. Before the road was built in 1840, the towns along the coast were connected by a series of footpaths. Later, as tourism developed, the road was improved for horses and carriages, and later cars. But with the sea on one side and rock cliffs on the other, there's still barely room for two cars, let alone two buses rounding corners in opposite directions. 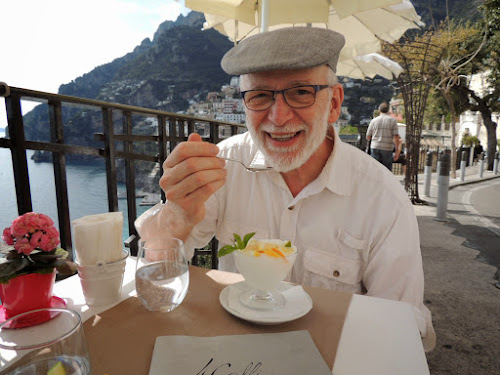 We've traveled the coast by bus and car in years past, and enjoyed neither very much. Our goal on this trip was to find out what it's like to settle in and stay for a while rather than just taking in the views from scenic overlooks. It seemed right to begin our research with a walk, but only after sampling our first lemon granita - a refreshing semi-frozen slushy topped with slices of fresh lemon, orange and lime.

Towns built into the hillsides can be reached by car or bus from the main road, but getting up or down from there requires either jumping on little van-sized local buses, or navigating maizes of stone staircases. From Positano, we took our inaugural walk up 1,700 steps to the mountain village of Nocelle. Our FitBits went crazy, registering 145 floors compared to an average 5-20 at home. Yes...it would have been smarter to take the bus up and walk down, but the timing wasn't quite right for a late Sunday afternoon visit to a unqiue birds of prey (owls, hawks, falcons etc.) sanctuary called Ali nel Vento - Wings in the wind. The young owners, Ludovica Crudele and Andrea Puglisi, have 13 birds, all born in a captive breeding program, they use for educational training and demonstrations. Visitors can participate hands-on by donning protective leather gloves as Ludovica and Andrea lure the birds with pretend prey - a stuffed toy rabbit (filled with meat) for the hawks and a toy chicken for the vultures, with a treat tucked into its rubber carcus. 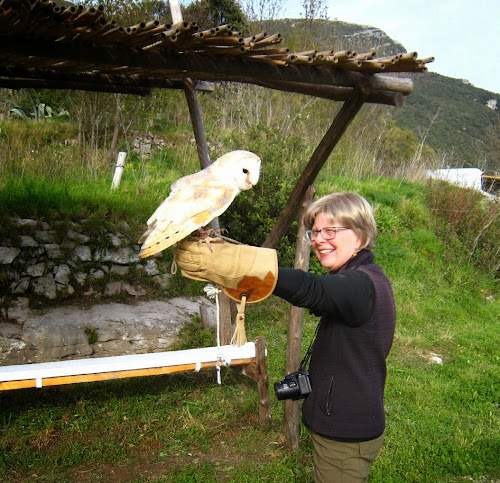 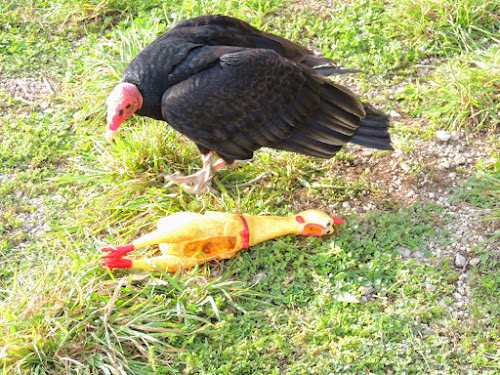 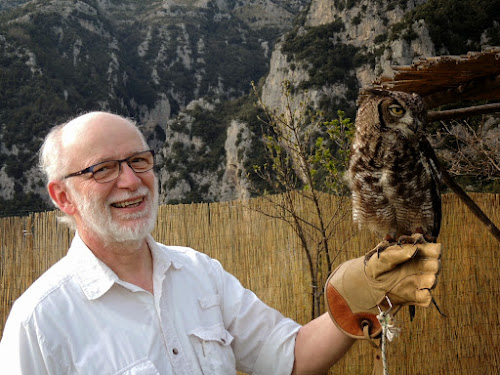 The visit and the walk left us thinking about dinner. We found the Ristorante Santa Croce, reached via a steep stone staircase down from Ali nel Vento, or a short flight of stairs uphill from the village bus parking lot. From a window table, we were able to see the lights of Positano come on just after sunset. We ordered a dish we would repeat many times on this trip - an antipasti composed of grilled vegetables marinated in the local olive oil. I counted more than a half-dozen veggies on the plate including two types of bell peppers, eggplant, zucchini, muchrooms, fennel, olives, spinach and carrots. This, along with the house white wine; an order of pumpkin penne with smoked mozzarella for me; spinach and ricotta cheese ravioli for Tom; a mixed green salad and the local limoncello (on the house) came to around 45 euros, or $47.80 including tax and service. The dollar is almost on par with the euro right now ($1.07 to one euro), making even expensive resort areas like the Amalfi coast feel like a bargain compared to a few years ago when the exchange rate reached $1.60. 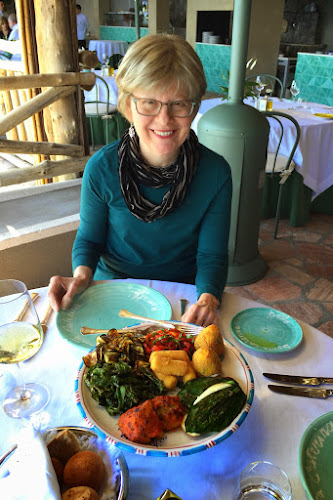 As part of an assignment for Virtuoso Life Magazine, our home base in Positano was Le Sirenuse, the elegant former summer home of the Sersale family, converted to a hotel in 1951. Our balcony, below, overlooked a pool and below that, a swimming beach and the Marina Grande filled with fishing and sightseeing boats. The landscape is almost vertical, so even though the beach looks far way, it's really just a short distance down several long flights of steps, or, from the Sirenuse, via an elevator that goes part way down.

Positano is a resort town that attracts the rich and famous, but it's also a village where real people live, and hang their laundry from houses along "streets" that are really just pedestrianized pathways. Like the Sirenuse, most hotels and shops are owned by second and third generation family members. It's easy to walk into a shop, and get the history of the Amalfi Coast from owners who were born here. 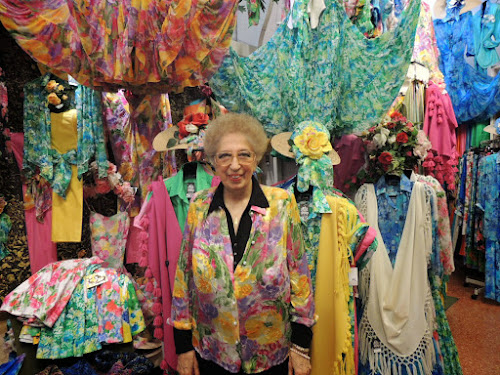 Louisa Barba, 76, above, and her husband, Mario, opened their clothing shop called Louise 56 years ago in the same location on the Via de Mulini where it is today. She traces the evolution of "Moda Positano," a type of free-flowing, colorful fashion, to the artists and writers who popularized the coast as a tourist destination in the 1950s, and inspired young seemstresses like herself to branch out with new ideas. "Positano is color," says Louisa who spends most mornings in the shop while her husband works at their factory. Her only rule: "No black." She recalls when Jackie Kennedy Onassis was a frequent visitor to the coast, and asked her if she could make a few pairs of pantaloons - wide, flowing pants - to wear to the beach. Louisa still carries a version of the pants in her shop today. 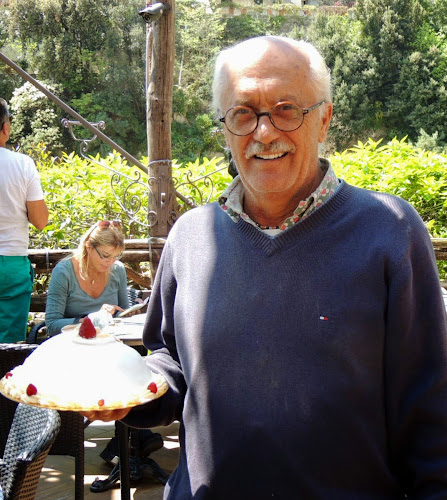 Mario Russo runs La Zagara, a caffe started by his father, Giacomo, more than 60 years ago. "You are in a paradise of lemons," he told us, pointing to lemon trees growing in the restaurant's backyard garden. Terraced hillsides above the seaside village are filled with groves of lemon trees, first brought to the coast on trade routes from the Middle East. Large, elongated lemons are used for producing limoncello, a liquor made from soaking the rinds in 96 percent alcohol and sugar. 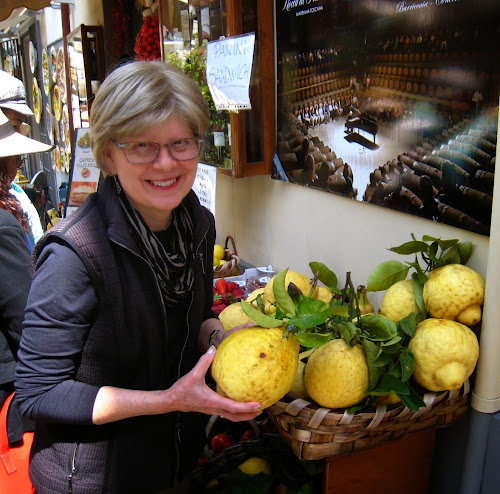 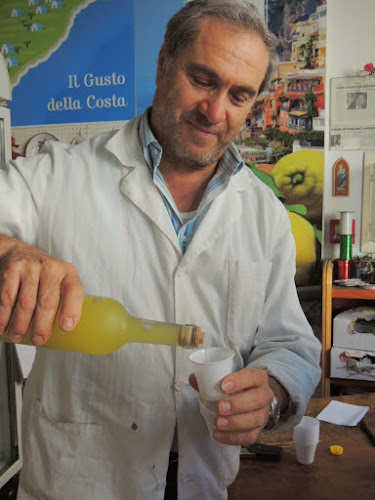 The Zagara and just about every cafe on the coast sells another specialty, delizia al limone, a sponge cake made with lemon and cream. The Italians call them "nuns' breasts." Mario sells a pizza-size version topped with a strawberry "nipple."


Most people only have a few days to devote to exploring the Amalfi coast. The big question is where to base, Positano, Amalfi or Ravello. There are other towns and villages, of couse, but these are the big three and most convenient when it comes to buses and boats going to Capri, Sorrento or Salerno. Positano is busiest and most compact, good for families who want to find a variety of things to do and see right at their doorstep. Ravello, high up in the mountains, is the coast's cultural center. No beach, but there are hotels with nice pools; good restaurants; summer musical extravaganzas and excellent hiking.


Amalfi itself might be my favorite. The town seems more like a real city than a village, with colorful Arab influences in the archtecture left over from when the town was a major maritime republic, paper-making center and trading partner with the Middle East. Tourists discovered it in the 19th century when the Amalfi Coast was part of the European Grand Tour. It was about that time that Giuseppe Gambardella built a hotel called the Santa Caterina. His son, Crescenzo, carried on, creating a six-room hotel which is now the five-star, 66-room Santa Catarina, pictured below, now run by his daughters, Giusi and Ninni, and their children.


The hotel is just a few minutes drive or a 15-minute walk into town, but staying here feels more like being a guest at a country estate. Rooms overlook the water and private gardens planted with lemon and olive trees. There's no beach, but with a sea-level, salt water pool like this, reached by elevator, who needs one? 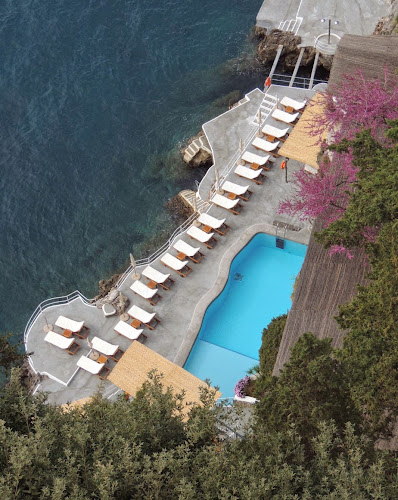 Giusi Gambardella is a woman anyone would admire. A mother and grandmother, she is still working at 70. Delivered to my room was an invitation to meet hand-written on a piece of stationary made from Egyptian cotton by the last remaining paper mill in Amalfi. Smartly dressed in dark jeans, leather loafers, a navy blazer and blue-checked scarf, Giusi recalled being groomed by her father to take over the family business, normally a job that would have fallen to the oldest son.


"I was supposed to be a boy, so I was treated like one," she explained. When she came home one day with excellent grades in math, "My father said to me, 'you deserve a good prize.' " She was hoping for a treat, but instead was rewarded with a series of private lessons from the hotel's accountant. "I cried," she recalled. But her father assured her she would be grateful later on, and of course he was right.


It's been fun discovering the Amalfi Coast in style. Now it's on to Rome for a quick visit, and back to my usual reporting on budget travel finds. The aperativo is the Italian version of our Happy Hour, only here, you buy a drink at a reduced price (in this case, the popular Aperol Spritz) and they bring you what looks like lunch. All this for around $5.


We spent our first few hours doing laundry at a friendly Bangladesh "self-service place" where the owner washed and dried it for us, advising us we could save money by using one big washer and one big dryer instead of two small ones. Then it was off to the Piazza Navona to see the street performers, and dinner at Est Artigiani del Gusto, which specializes in homemade pasta and organic ingredients. Trending in Rome: High-top sneakers decorated with sparkles and silver studs and selfie sticks for sale by street vendors for $1. Only complaint: Our hotel is above an East African bar where everyone seems to be having too good of a time.