The former countries of the Soviet Union are some of our favorite European travel destinations, so when I found out that Air Baltic flies non-stops out of Rome, we decided to leave Mediterranean Italy behind to spend a few days in Riga, Latvia near the Russian border. Switching cultures is always part of the fun of traveling, especially when going from a country such as Italy with its old-school traditions (Lunch at 1 p.m., dinner no earlier than 7:30, one price to drink standing up at a bar and another to sit at a table etc.) to a city like Riga, still spreading economic wings after 24 years of independence from Soviet rule.

Riga represents the New Europe, not in a historical sense, because it's 800 years old, but rather because it's populated with "Let's try anything" 20 and 30-something entrepreneurs who were children when Latvia declared its independence from the Soviets in 1991. Order a latte at Golden Coffee in Riga's Old Town, and you won't be charged extra to relax in an upholstered chair while soft jazz plays in the backround. Neither will you line up Starbucks-style at a cash register. The drink comes artfully layered in a tall glass, served by a young waiter who speaks at three or four languages. It seems we're never far from an atmospheric


cafe in Riga. Above is one of my favorites, the Art cafe Sienna in a neighborhood filled with Art Nouveau buildings designed by a Russian architect in the early 1900s. The cafe feels like a room in the apartment of a well-to-do aunt, with high-back chairs, books on fashion and art piled on the windowsills and coffee and tea served in china cups. We've been stopping once or twice a day in places like this, sometimes to get out of the rain, and other times just to rest. Walking and riding the trams is the best way to see the city. We've been logging 7-8 miles of walking per day, sometimes more.

Here's another find, the Aspara, a circular wooden tea house overlooking the Riga canal and a city park. We should import this idea to Seattle. Customers order from a huge tea selection downstairs, then go upstairs and make themselves comfy upstairs on pillows and cushions.

Everyone seems excited about the freedom to try out new ideas for restaurants, shops and hotels of the kind that didn't exist 24 years ago. We're staying at a B and B called simply "Homestay." It's 30 minutes by tram from the city center which is giving us a taste for real Latvian life. Our hosts are Diga Daga, a Latvian, and her partner, Ric Mallard, from New Zealand. They built their home 12 years ago in Mežaparks, an exclusive neighborhood developed in the early 1900s as one of Europe's first garden cities - self-contained, planned communities. A large collection of Art Nouveau and Tudor-style mansions were built close to a lake surrounded by forests and footpaths. Most were built by wealthy Baltic Germans who where resettled elsewhere prior to the Soviet occupation of Latvia in 1940. The Soviets turned the elegant houses into military camps or shared apartments for dozens of families. Most of the homes were left abandoned or in such poor condition after 1991 that few could afford the cost of fixing them up. That's all changed, of course, and the neighborhood is once again one of Riga's most exclusive. Among the residents are bankers, wealthy Russians, a few Americans and the ambassadors of Germany (house pictured below) and Switzerland. 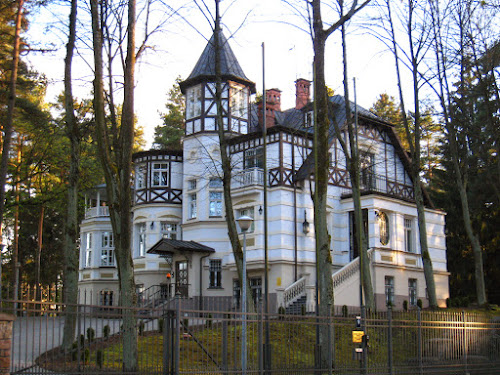 Ric and Diga's home is huge and eclectic with four rooms set aside for guests. Ric fixes a big breakfast in the morning while Diga gets up early to walk their dog in the woods. When we come home in the evening, they invite us in to chat over glasses of vodka or cups of tea. 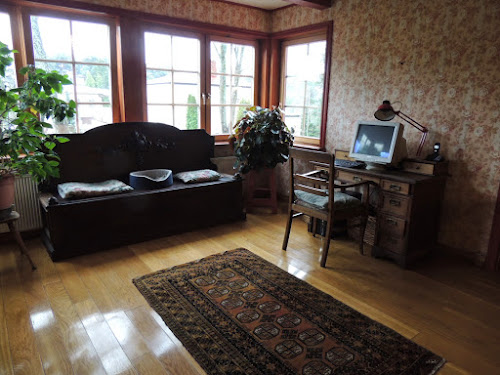 The conversation ranges from home construction to the upcoming American election and Putin's moves on neighboring Ukraine. Diga, who was 38 when the Soviet occupation ended, tells us that her father was imprisioned at age 15 in a building that now houses the KGB Museum. She recommends we visit, which we do the next day. A guided tour in English took us into the basement where poltical prisioners were held 15-20 to a cell with no ventilation and only a bucket for a toilet. Occupied first by the Soviets under Stalin in 1941, then by Nazi Germany in 1942 and again by the Soviets until 1991, Latvia, along with the other Baltic countries of Estonia and Lithuania, has a horrific past which is thoroughly covered on this tour as well as on a visit to the Museum of Occupation. 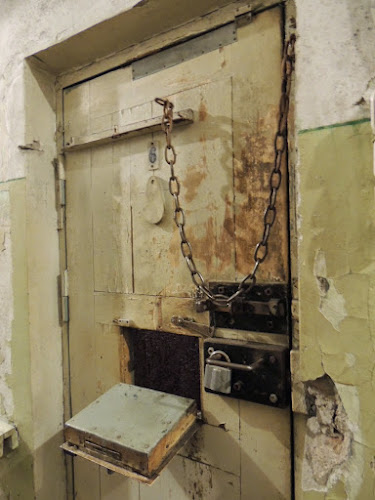 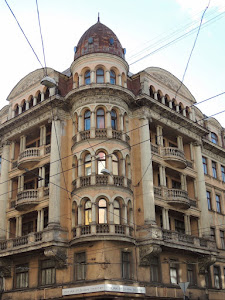 The former headquarters building, called the Corner House, was used as a police station for a time after 1991. It's now empty except for a small portion occupied by the museum. What went on inside was kept secret under the Soviets. Informers summoned to give evidence about their neighbors and friends were issued special security passes to enter. Agents took prisoners from their homes at night, and delivered them to a back entrance in vehicles disguised as milk or bread trucks. Part of the museum display includes chilling videos of former prisioners talking about their experiences. A woman who shared an apartment with a friend tells the story of her friend accusing her of a "crime" so that the woman would be arrested and the friend could have the apartment for herself. 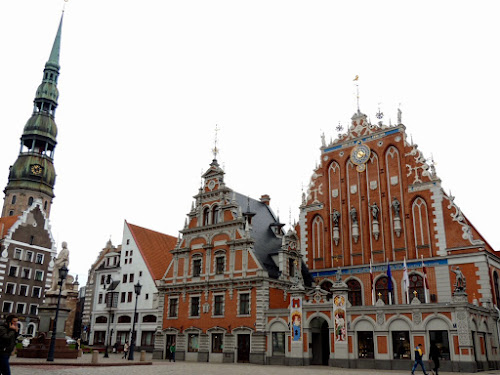 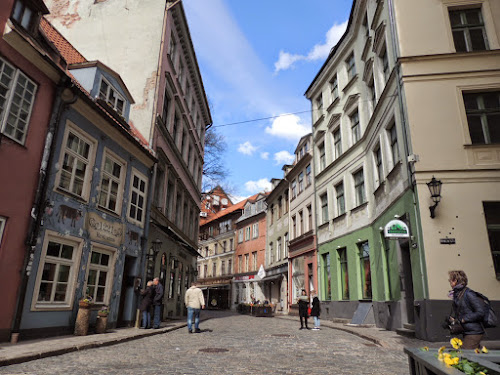 The restored House of Blackheads in the medieval Old Town is probably the most photographed building in Riga. The Blackheads were unmarried members of the merchants' union (Single men were not allowed to join the regular guild). The Old Town attracts the most tourists, but there's much more to Riga. Partly because we've been riding the tram to and from our homestay, we're discovering many interesting things to do and see and places to eat in parts of the city built in the 19th and 20th centuries. In addition to its large collection of Art Nouveau architecture, Riga has beautiful city parks, an impressive Russian Orthodox church, an hourly changing of the guard ceremony at its Freedom Monument, and a 1930 public market housed in former German Zeppelin hangers.


One section of the Central Market is devoted to sauerkraut and pickled foods, favorites in the Latvian diet which also tends to be heavy on meat. One way to get around this is to eat at ethnic restaurants, which is this part of world might be Armenian, Georgian or Uzbek. We visited Armenia and Georgia last year and loved the food, so when we spotted the restaurant "Aragats,'' and decided to give it a try. We sat down and were given menus. Then the owner came by to take our order. She looked at my


menu and asked, "What are you doing with the man's menu?'' Mine had prices listed while Tom's did not. Apparently someone mixed things up when we sat down, and I ended up with the wrong menu. We joked that we'd take one more man's menu please - for Tom - and asked why the policy of no prices for women.

"We have problems all day," she explained. "When you come here, you can relax. Why not?" Hmm...makes sense I guess, but I wonder what they do when two women come in together. We ordered the traditional spreads made with spinach and walnuts and beans and walnuts, freshly baked bread and a chicken dish with tomatoes and fresh herbs chopped table side. Yerevan's loss was Riga's gain. The family came to Latvia in 1988 after an earthquake in Armenia. They opened their restaurant 20 years ago, four years after the end of Soviet occupation. Owners, Milly, and her mother, Lyubov, 82, credit their good looks to a healthy diet.


Young Latvians are coming up with new takes on traditional cuisine. We found Istaba, a gallery and art cafe, just off the No. 11 tram line, across from a bar called "Belarus Spirit." Downstairs is a boutique stocked with postcards and jewelry made by local artists. Upstairs is a tiny restaurant furnished with a few tables scattered around an open balcony that looks down on the shop where the clerks also give haircuts. "It's artists doing what they want," our waitress explained. "Like free spirits."

No chance of getting the wrong menu here because are no menus. You choose pork, lamb, chicken or fish for $15-$17 and everything else is included. The starter is grilled bread with three types of spreads -olive, beat and bean. Next comes a huge salad that looks as if it has just been picked from someone's garden. "Side'' dishes of potatoes, vegetables and coconut rice accompanied my sea bass (head still on) and Tom's lamb chops. It was the best meal of the trip so far, and at $50 including wine and mineral water, our most expensive. Another night we ate in a candlelit cellar in the Old Town. Rozengrals is touristy, for sure, but loads of fun. The food - all dishes that might have been served in medieval times - was surprisingly good, including the honey beer. My trout and Tom's rabbit stew came with two disks of yeast bread wrapped in burlap and sides of of lentils and barley served by a waiter dressed like a monk.


It's not unusual that the new president of the Ukraine made his fortune running a chocolate company, Chocolate-making is big business all over Eastern and Central Europe. It's also an art form. The shop below specializes in truffles in unusual flavors such as olive, rhubarb and lemon. They're so precious that the clerks offered us just one sample to share. 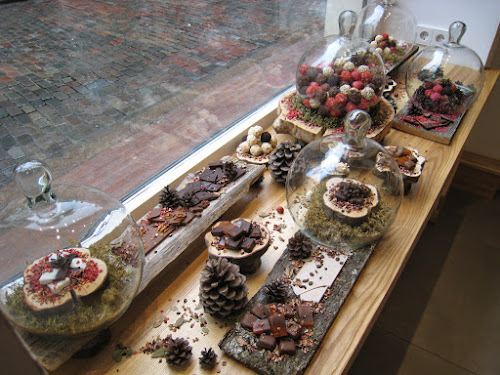 Latvia's most famous chocolate-maker is Laima, in business since 1870. The Soviets combined several companies under the Laima name during their occupation, and Laima survived after the collapse. A small museum next to its factory welcomes visitors. The self-guided tour includes a tiny cup of drinking chocolate, the chance to make your own chocolate bar and take selfies in various chocolate-themed poses. Latvians really do have more fun! 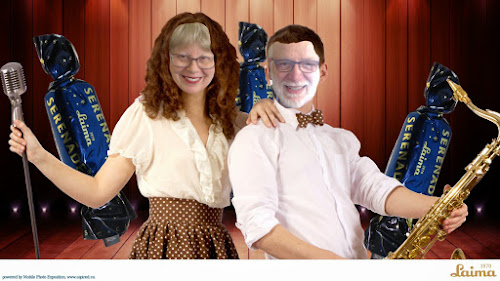 Thanks for traveling along with us. For more photos, see our Picasa Photo gallery. Look for "Rome" and "Riga"
http://www.baltics2015.puciello.com