The Kitchen Gods Smile on Saigon


"If you're going to do something bad, don't do it in the kitchen." Good advice anywhere, but especially in Vietnamese kitchens, according to Tra Duong, above, posing next to her father's homemade snake and ginseng wine in her home in Saigon where she and two of her university friends hosted Tom and I for a Sunday lunch. I was asking about a small shrine above the stove, illuminated with two red Christmas tree bulbs. "It's the Kitchen God, " she explained. Just before the New Year, he returns to Heaven to report the activities of the household over the past year. The family is then rewarded or punished, depending on the report. Duong's family no doubt receives high marks.

We joined Duong and her friends, Ngan and Linh, above, for a "Traditional Meal Tour,'' sponsored by a volunteer student group called Saigon HotPot, aimed at helping university students practice their English communication skills. I set up the meal as part of research for a culinary-focused story on Saigon (Ho Chi Minh City) for Virtuoso Life Magazine.

Food always seems to open windows into aspects of culture and daily life that we might otherwise miss, and this trip has been no exception. Not only did we enjoy a fantastic meal cooked by Linh, 18, on Duong's two-burner stove, we learned much about the lives of these three smart, well-educated young women. Duong, 18, studies professional communications. Ngan, 20, is an English lit major, and Linh studies food science and technology. They represent the future of this big, bustling city of 8 million, the capital of South Vietnam before the war (referred to here as the "American'' war), and now the country's biggest metropolis. With more than half the population under 35, it's a high-energy city with one foot in the world of modern skyscrapers and neon lights and the other in traditional Asian street life where tropical weather calls for eating, drinking and selling everything from hardware to clothing from open-air sidewalk store fronts.

The roar of motorbikes is constant. Estimates are there are 6 million in the city. Few drivers appear to obey any type of traffic regulations, making the idea of crossing busy streets (with few traffic lights) seem impossible at first. As it turns out, most are careful drivers and adept at weaving around pedestrians and cars. Many wear face masks, and many women (there seems to be as many women as men) cover themselves head-to-toe, even in 90+ heat, to protect themselves from the sun.

Saigon Street Eats, a company run by Australian journalist Barbara Adam and her Vietnamese partner, Vu, offers the chance for visitors to join the fray on a "Street Food 101" tour on the back of a motorbike (Taxis optional for those too afraid). We opted for the motorbikes, and Vu and a friend picked us up at our hotel, extra helmets (mandatory in Saigon) in hand for the start of a three-hour tour. The plan was to visit four street-side restaurants, all family-owned, and all specializing in one or two traditional dishes. Good Vietnamese cooking is complex, often calling for a long list of herbs, spices and veggies, the reason why many here end up eating out often, especially for breakfast. Most of us are familiar with Pho (noodle soup) or Bahn Mi (baguette sandwiches), but as we found out, there's much more. 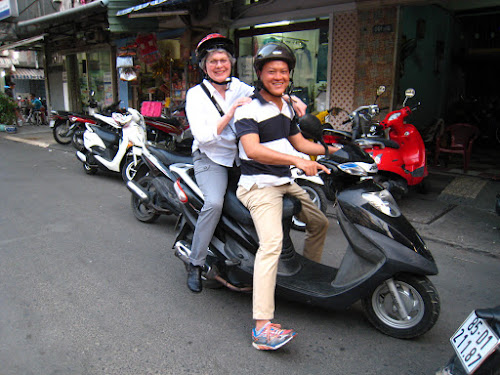 Here's me on the back of Vu's motorbike, obeying his instructions to either hold onto his shoulders or hug his waist. Let's just say I hugged tight as we sped through traffic for a 15-minute ride to a residential neighborhood where we parked, and met three others who had signed up for the tour.

Here's a typical scene. This restaurant is called simply NGA, the name of the family who owns it. Among the specialities is a dish from Hue, a city in Vietnam noted for its food; and Banh Xeo, a type of a pancake, made with rice batter and turmeric, then filled with seafood and veggies and fried until crisp. We sat at a long metal table on stools, breaking off prices of the pancakes with chopsticks and wrapping them in mustard greens and lettuce leaves sprinkled with fresh herbs. 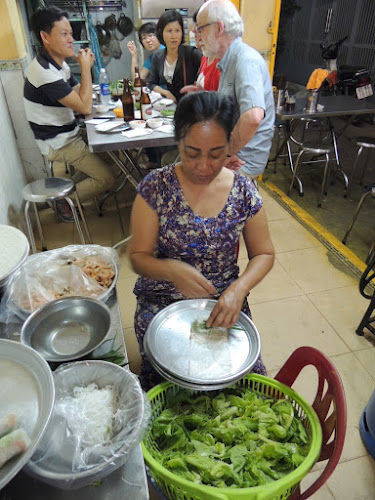 Street food is probably best eaten on a tour like this, where the guides know which vendors have the best reputation for good hygiene. Vu's advice: Eat at places where the cooks make the food right in front of you. The highlight of the evening was a visit to a local dessert shop, where the 96-year-old matriarch presides over the work of fourth-generation family members. The specialty of the house is what resembled a bowl full of jelly - a sweet, chilled, glutinous concoction with lotus seeds, water chestnuts, palm nuts and cooked strands of clear seaweed. 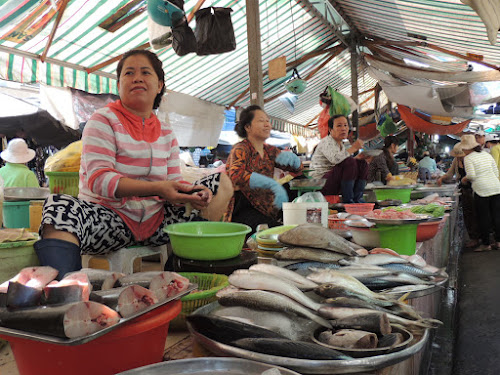 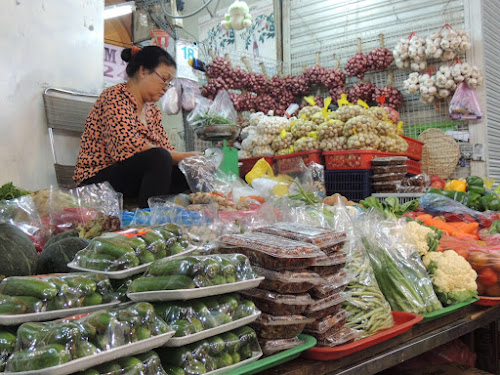 Saigon is known for its restaurants serving a combination of French, Chinese, and Vietnamese cuisine. You can pay a dollar or two for a meal at a street stall, or $50 at a fancy French restaurant. The day after our street food tour we went upscale with a private cooking class and lunch at the former residence of American Ambassador Henry Cabot Lodge, a restored French villa where he lived from 1960-1965. Chef Bui Van Dam, sous chef at one of the Intercontinental Hotels, first led us through the French-built Ben Thanh market, pointing out delicacies such as mud fish (sometimes called "snake head'' fish because it looks more like a snake than a fish) and "milk apples,'' a round, green fruit with a custard center. Women peeled fruit while crouched on low plastic stools as vendors pushed their way through the aisles to deliver steaming bowls of Pho. It was hot, loud and chaotic morning fun. 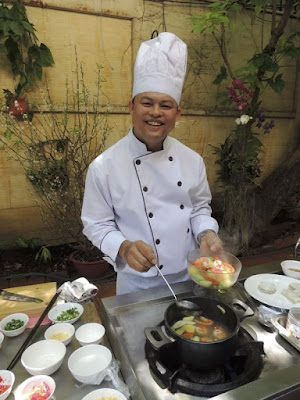 Our cooking lesson took place in the villa's outdoor courtyard where we learned to make spring rolls ("Fold left. Fold right, and roll"), Banh Xeo, a sweet and sour prawn soup and the mud fish in a clay pot. Lunch followed around a long table in the dining room, now part of a private residence owned by Trails of Indochina, a local tour operator. Decorating the walls are black and white photos of Presidents Kennedy and Johnson and a large painting of Henry Cabot Lodge.


When it comes to drinking, modern rooftop sky bars and colonial hotels dating back to the days when Vietnam was part of French Indochina, mix exotic cocktails. The Chill Skybar atop the AB tower is the place to be for happy hour at sunset. Drinks are $5, and come with a citywide view and cool breeze.

Hands-down, my favorite hot-weather drink is Ca Phe Sua Da, ice coffee with sweetened condensed milk. Starbucks and other chains sell a $3 version. Much cheaper (75 cents) and more fun was the little Ca Phe Ghien next to our hotel where we became regulars during our five-night stay.

Saigon has a number of attractions connected to the Vietnam War which ended in 1975. The War Remnants Museum, formerly known as the Museum of American War Crimes, has displays of Vietnam War-era military equipment and exhibits telling the Communist side of the story. Within day-trip distance are the Tunnels of Chu Chi, a Vietnamese-style theme park commemorating the underground tunnels used by the Viet Cong during the war. We visited them all, but frankly our people-to-people experiences are what we'll likely remember most. Vietnam is a Communist country with a vibrant, capitalistic economy powered by young people such as the three young women we met through HotPot. They speak excellent English, study hard, text with the best, and wield a mean selfie stick.


Linh, above, cooked dishes similar to what our chef prepared. If the final results were any indication, she will go far.

We traveled from Seattle via Seoul, South Korea on Delta Airlines (12 hours of flight time), and onto Saigon via Korean Air (5 hours) for a total of 17 hours of flight time and a 15 -hour time change. We used Delta's nonstop to Seoul and its Korean Air codeshare to Saigon because we are earning Silver Elite status on Delta, but for those who are not, it's usually several hundred dollars less to to fly Korean Air the whole way. Korean also flies non-stop to Seoul from Seattle.

Where to stay: We stayed five nights at the Ben Thanh Boutique Hotel, a 22-room hotel in Old Saigon near the Ben Thanh Market. The hotel is in an alley off a main drag, so it was convenient yet quiet. We loved the little  neighborhood businesses, including an open-air cafe for ice coffee and a stall that churned out sugar cane juice from fresh sugar cane. Our room was $70 per night with a breakfast buffet that included Western and Vietnamese dishes. Virtuoso arranged our  last two nights  at the Park Hyatt Saigon,  downtown, near the Opera House, the Saigon River and Dong Khoi street. The Hyatt has no rooftop bar, but does have a huge pool and an excellent breakfast buffet served indoors or on the terrace. It's probably one of Saigon's best luxury hotel values. Rates start at around $350.


Excursions: We took one excursion outside of Saigon to the Cu Chi Tunnels, a network of underground tunnels in rural Vietnam used by the Viet Cong as base of operations during the Vietnam War. Most tours take visitors by bus, but we decided to go by speedboat along the Saigon River with a company called Les Rives. It was a splurge at $80 per person, but  worth it since it meant we could go with a small group of just eight passengers and five crew. The trip included an hour and a half boat ride each way, a tour of the Tunnels and an outdoor lunch on the way back on a small island outside the city.


Student tours: Saigon HotPot: This student-run volunteer group offers three different tours, all free to foreign travelers. Besides the Traditional Meal Tour ($10 per person to cover the cost of ingredients), there's a Chinatown tour and a general city tour. Request a tour on the website in advance of your visit.

Street food: Saigon Street Eats offers several types of street food tours, including walking tours and the option of transportation by taxi. Tours last 3-4 hours and start at $40 per person. Learn more about Saigon street eats from Mark Wiens, a video-blogger with excellent info on what to find where.