From squid on a stick to temples and hot springs, Taipei has much to offer

They give us the thumbs up sign on the subway, offer us extra free samples at the markets, chase us down the street asking if we need directions, and always ask where we are from and how long we plan to stay.

If you want to feel like a VIP (or someone who just landed from Mars, depending on your perspective), come to Taipei, the capital of Taiwan, the independent island off the coast of mainland China, once known as Formosa.

We've seen maybe a half-dozen Western faces since arriving here more than a week ago from Saigon. This amazing city is popular with other Asians, especially mainland Chinese tour groups, but Taiwan remains off-the-radar for most Americans. Why come? Food and friendly people are two reasons. We've spent the week walking an average 8 miles a day while eating our way through the night markets, exploring tea plantations, dipping our toes in thermal hot springs and just soaking up life in a high-energy city where street vendors dishing out 30-cent dumplings do business next door to New York and Tokyo-style shopping malls.

Occupied for years by the Japanese and by a short time by the mainland Chinese, Taiwan is an independent democracy with a newly-elected female president. Its official name has been the Republic of China since 1949 when its first president, Chiang Kai-shek, moved his Nationalist government here after losing control of China to the Communist party. Taiwanese culture reflects this unique upbringing. Financially prosperous, Taipei seems to work in ways similar to what you might experience in Singapore or Tokyo rather than Hong Kong or Shanghai. There's little or no crime, no bag-snatching or pick-pocketing, no short-changing or littering. It's considered impolite to bargain in the shops because that would indicate that the vendor was trying to cheat you by not offering a fair price in the first place.


It's true that fewer people speak English than in other big Asian cities, but those who do are anxious to practice. We've found that knowing how to say "Hello'' and "Thank you" in Taiwanese goes a long away. This Taiwanese "grandma'' and I communicated with hand gestures, smiles, a peak into her refrigerator and a thumbs up or down sign to win me a dish of her healthy homemade tofu pudding with peanuts and tapioca.


Among a population of more than 8 million are hundreds of thousands of young people such as the young woman above whom we met our first day out on a hiking trail to Elephant Mountain, just a few minutes walk from an area chock-a-block with high rises, multi-level Starbucks stores and the Taipei 101 Tower. The reason for her costume? She and her friends played a game of monopoly, and agreed the loser would to go out in public dressed as a banana.

We tend to think of the Chinese as tea drinkers (Taiwan grows and produces vast amounts of quality Oolong tea), but coffee is extremely popular here, and Starbucks has lots of competition from local roasters. Some of the cafes occupy gorgeous spaces. Others are simply open-air, sidewalk storefronts churning out brown sugar lattes macha green tea smoothies for about $2. This cafe above is in an 80-year-old house that the owners refurbished near Dihua Street, one of Taipei's oldest streets.

Everyone gets around on the MRT, an underground and above-ground high-speed mass transit system linking all parts of the city. Stations empty out into miles of underground shopping malls, with dozens of different exits to street level. We've been lost several times. One day we walked for at least a mile underground between stations before finally finding our way out. Americans might object to a slew of rules for good behavior on the MRT, but this is Asia where concern for the common good trumps the right to do as you please. Announcements in Taiwanese and English warn passengers "not to smoke or chew betel nut," and to "please wear a surgical mask if you have a cold or the flu." Surgical masks, in fact, have become so common that some women have begun coordinating them with their outfits.

Restrooms are plentiful and clean. What woman hasn't been frustrated by having to wait in line to use the bathroom? Here you know exactly how long that wait might be. Electronic signs posted outside indicate how many stalls are available, and "real time'' wait times for both western-style and Asian-style toilets.


It's possible to tick off Taipei's major tourist sites fairly quickly. Our first stop was the Taipei 101 Tower, designed to resemble bamboo rising from the earth. Between 2004 and 2009, it was the world's tallest building. Elevators zip passengers to the 89th-floor observation deck in 37seconds. A film shows how the building swayed slightly during a recent typhoon. Tickets to the top cost $15, an outrageous price compared to cost of most everything else, but they came with a two-for-one coupon for a beer and mango float.

We weren't all that impressed with the Chaing Kai-shek Memorial, maybe because a huge, temporary tent housing an exhibit of Disney's "Frozen'' movie obscured the view. Tom did get a nice picture of the changing of the guard.


More impressive than Taipei's monuments and museums are its temples dedicated to colorful Chinese deities.

Our favorite was the Xiahai City God temple. It's the most popular place for young people in Taipei to make offerings to the Old man under the moon, also known as the Matchmaker, the god of marriage and love in Chinese mythology. 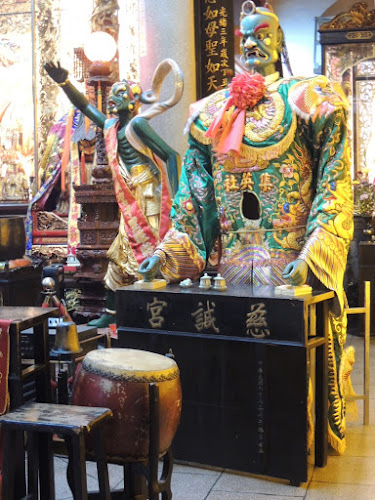 We noticed people throwing curved tiles on the floor. These are divining blocks used to seek advice from the gods. People first stand before can icon, and burn three incense sticks. Then while holding the blocks, they silently state their name and birthdate and present the petition in the form of a question. They then throw the blocks. If one convex side and one flat side shows, the answer is positive. Two convex sides are "angry blocks.'' The answer is negative. If two flat side show, no answer has been given, and you have to try again with the question framed a different way. 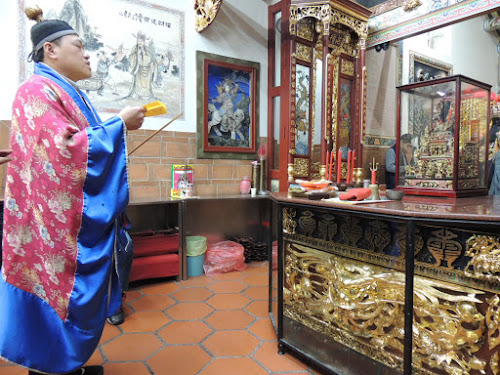 By far, we've had the most fun wandering through the crowded, chaotic night markets. Everyone goes for the xiaochi or "small eats." Food vendors try to outdo each other hawking snacks with strange English translations. I spotted signs for "Pig and Miscellaneous Soup," "Salty Poridge," "Black Tea Juice," and "Nutritious Sandwich."


Stinky tofu is a big seller. We learned to recognize the smell, but as it turns out, it's only stinky before it's cooked, according to a Taiwanese friend. Marinated and grilled, it's delicious. Taiwanese food tends to be healthy, emphasizing lots of veggies, but a lot of night market food is similar to what you might find at a carnival or fair in the U.S., only with an Asian twist. Popular are fried fish balls on a stick, fried squid on a stick and tomatoes (on a stick) dipped in a red, candy apple-like syrup.  Mostly, we played it safe, passing on the fried seafood, but going for cubes of blow-torched steak and ice cream made with liquid nitrogen.

A hot climate calls for a steady supply of refreshing drinks. The woman above is making a lemon jelly drink spiked with fresh lime. Remember bubble tea, sometimes called pearl tea? The craze started in Taiwan. Market vendors make their own  homemade tapioca pearls for "Boba Milk," a mixture of tea with milk, sugar, ice and tiny tapioca balls the size of pearls.

Taipei is surrounded by mountains, so it's easy to literally go from concrete jungle to the real thing via a short ride on the MRT, bus or cable car. What could be one of the world's longest (45 minutes) and cheapest ($3) gondola ride takes visitors to Maokong, Taiwan's oldest tea-growing area filled with lush forests and hiking trails.


Tea tourism more than tea production keeps the economy going these days. From the gondola, it was a pleasant mile or so walk to trails leading to the Yaoyue Tea house, one of the best among many scattered along a winding road. We went on a weekday when here were few people around, so we were surprised to find out that Yaoyue is open 24 hours a day.

The Taiwanese like to visit the tea houses at sunset or after dark, especially during hot weather. Wait on weekends can be long, but on a sunny Wednesday afternoon, we had our choice of tables inside or out. Tea and snacks run around $20 for two. We settled on two types of steamed dumplings, one filled with bok choy and the other with a sweet cream. The tea was a typical Taiwanese oolong, light, almost watery, and low in caffeine.

Our other outing away from the city was to the suburb of Beitou, a town known for its thermal hot springs, about 20 minutes out on the MRT. Beitou could be what Ballard is to Seattle or Hyde Park is to Cincinnati. Mom-and-pop shops, neighborhood bakeries and street vendors (this is where I met the tofu pudding lady) cater to locals benefiting from a healthy economy fueled by hot springs resort hotels.

We stayed two nights at the Solo Singer Inn, a traditional Taiwanese inn opened four years ago by a group of artists and travelers and historians. The Japanese stayed in inns like this one opened during their occupation (1845-1945). Few of the inns survived, and from what I could tell, the Solo Singer is a unique accommodation in Taipei. Rooms retain the original layout with sloping walls and narrow, wooden staircases, each one with one unique window onto an everyday scene of alley culture. We loved the young English-speaking staff and the traditional Taiwanese breakfasts sourced from local Beitou purveyors.


Most of the thermal baths are in the resorts, but their are three public options, including an outdoor spa built into the rocks near a park that runs through the town. It looked inviting, but there was a long wait to get in due to a public holiday, so we opted for one of the indoor bathhouses where an hour's soak in a private hot tub cost around $10. Afterwards, the staff encouraged us to take advantage of a "free'' fish pedicure. These little toothless carp called "doctor fish" eat away at dead skin. Let's just say we dipped our toes in long enough to get a picture.


We ate our last meal in Taipei at a restaurant on the 8th floor of a department store. Like the MRT stations, the store had several entrances, so we spent a long time wandering in and out looking for the one leading to the 8th floor elevator. Along the way, we spotted this "Kitchen Pucci'' stand specializing in Shanghai-style steamed dumplings . It was closing for the night, so I didn't get a chance to try a Pucci bun.  I have no idea how someone with an Italian last name the same as mine came to run a chain of bun shops in Taiwan. This is what I love about Asia. There's always a mystery.

Click here to see more photos of our trip to Saigon and Taipei.