A vegan inn, 19th century palazzo and limoncello on the house : That'sItalian 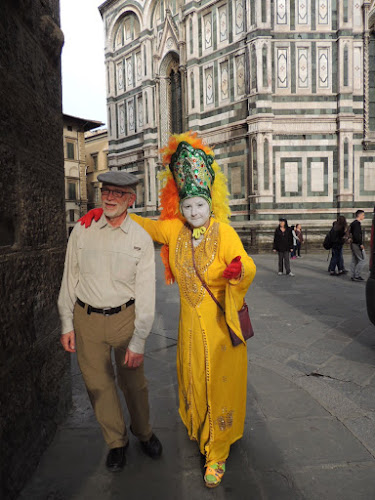 A poster in the kitchen reminds guests that being vegan "saves animals one bite at a time." The frig is stocked with vanilla and chocolate soy milk. A painting of a smiling Buddha hangs above the the table. Words like “vegan’’ don’t usually apply when it comes to airport hotels. Neither do $75 per night rooms with free Wi-Fi, breakfast, a bottle of wine and en- suite baths. That's what we found at the Vegan Inn Airport B&B, next to Rome's Leonardo da Vinci Airport on the Via delle Vongole (Street of Clams) in the seaside town of Fiumicino. 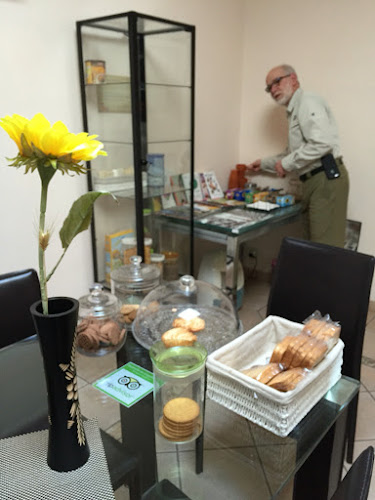 Anyone who has tried to figure out how to make an early morning flight out of Rome without either spending $50 on a taxi, or overnighting at the expensive Hilton inside the airport, will appreciate this find. The four-room inn is a five-minute drive from the airport, and 40 minutes by bus to the center of Rome. We stayed here on our first night of a two-week trip to Italy so we could be at the airport early the next morning to meet Tom's brother, Al, and his wife Nancy, who were flying in from Ohio. The owners, Daniele and Rosa, supply a breakfast that includes no animal products. They welcome guests with pets, and provide bowls of water and a free vegan snack. A bit quirky, for sure, but convenient and very comfortable, with large bedrooms and modern bathrooms. We arrived late in the afternoon, tired but not too tired to go into Rome for the evening. After a dinner of zucchini and tomato pasta and eggplant Parmasean at Est, an organic restaurant near the Campo Di Fiori, we had time to swing around to the Piazza Navona and stop for gelato before catching the 8:50 p.m. bus back to the inn and falling into bed 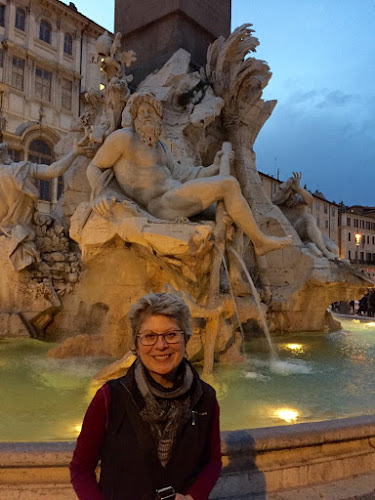 The next morning it was off to Florence on a train directly from the airport. Transportation seems to improve every time we visit. The trip now takes just 2.5 hours on the high-speed Frecciargento ($25). When we first started coming to Italy many years ago, the trip took 4 hours. Our hotel, the Residenzia Johanna 1, is in an elegant, 19the century palazzo, just outside the main tourist zone, a 15-minute walk to the Duomo and most of the major sites. Rooms are around $100,with breakfast. 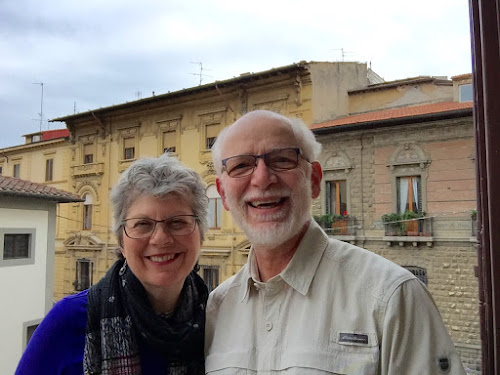 The view from our balcony in Florence

Our balcony overlooks a kindergarten schoolyard with a lively afternoon recess. We won't be doing much afternoon napping, but we will be eating well. After a short stroll around the Dumo before dinner, I was happy to discover that a restaurant we found here 12 years ago - Antica Trattoria da Tito - is still here, on the same corner it's been since 1913. For about $20 each, we had a huge antipasti - all sorts of cured meats, cheeses, artichokes, roasted garlic, sun dried tomatoes - plus wine, four portions of gnocchi with broccoli and limoncello on the house served by some very friendly waiters. 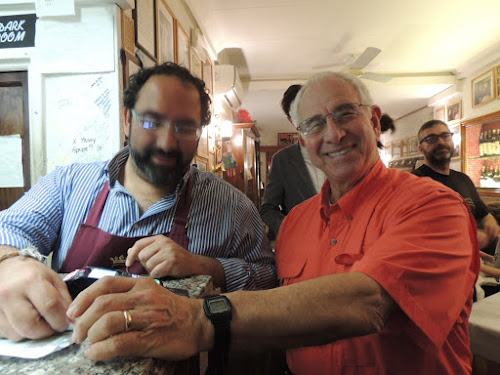 Al and our waiter at da Tito 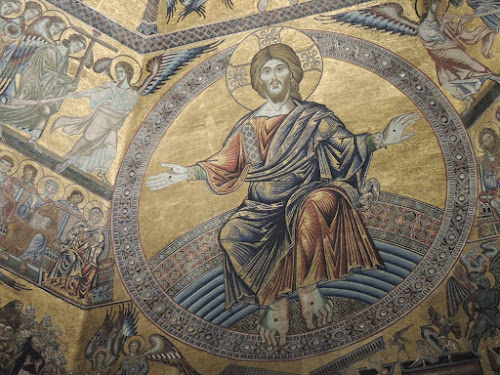 Florence now restricts cars and tour buses inside the historical center. Many of the streets are pedestrianized, making it easy to walk around and enjoy the city without traffic noise or congestion. We're finding mid-April is a great time to travel in Italy, just after Easter and before the summer tourist season. The Piazza del Duomo, the center of religious life in Florence for centuries, feels relatively uncrowded. We have been able to visit most of the major sites without long waits in line. Tom and his brother waited about an hour to walk the 463 steps to the top of the cathedral dome, but could have avoided even that by making a reservation for a timed entry. We did buy tickets online in advance to see Michaelango's David in the Academia Gallery, and with a timed reservation for late in the day, bypassed a short line outside. 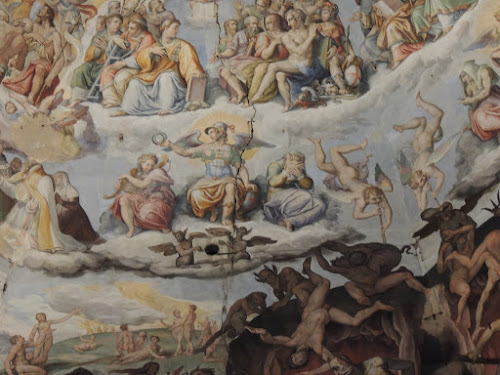 Built by Filippo Brunelleschi who won the competition for its commission in 1418, the dome in the Florence was made without scaffolding. 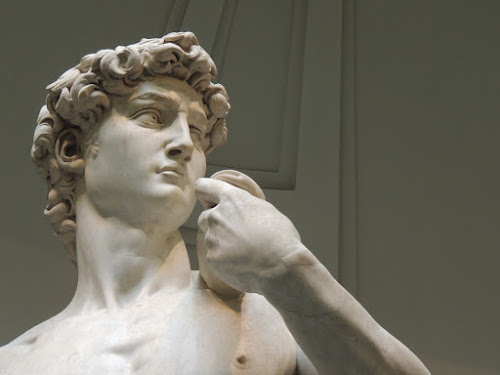 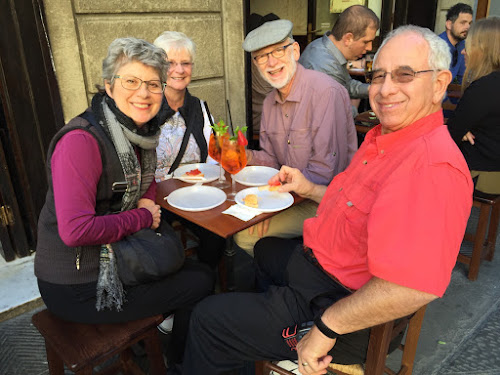 Happy hours have caught on in Italy. The bars compete by throwing In a spread of free appetizers with the price of a drink. Popular is the bright orange Aperol Spritz - Aperol, procecco and soda water. We got more than our money's worth of entertainment when a fire truck came blaring down the street as we were sitting at a sidewalk table. The street was too narrow for the truck to make it through, forcing us to move our table back from the sidewalk, and forcing Tom against the wall for a close-up encounter with the driver. 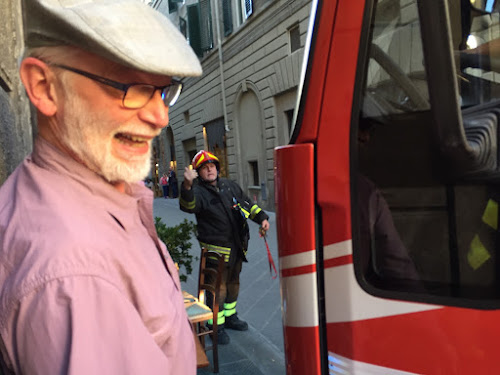 All of this took place around the Mercato Di San Lorenzo, a hub of activity during the day when leather, scarf and souvineer vendors set up their stalls, and late into the evening when a gourmet food court stays open until 10 p.m. on the top floor of an indoor farmer's market arcade. Most of the craft stalls these days are operated by immigrants selling goods made outside of Italy. 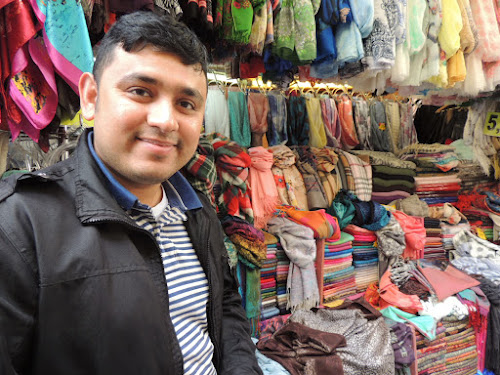 Norman at his stall in the San Lorenzo market

This vendor told me business has been slow since the Paris bombings.. Asian tourists are among his best customers, especially Koreans, but many have cancelled trips. Norman comes from Bangladesh. He's lived in Florence for three years and speaks fluent English. He gave me a good price on a scarf. It was probably made in China, but I liked it and liked him, and was happy to give him his first sale of the day. 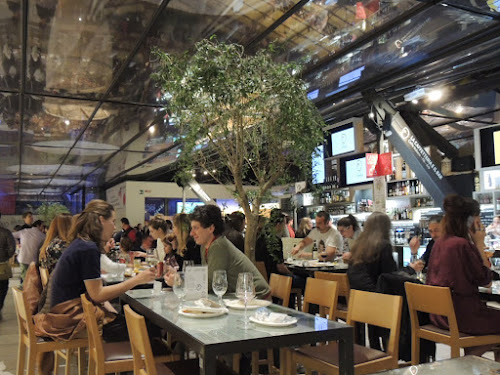 Young Italians are changing the traditional ways Italians eat. For travelers, that means it's often possible to eat well (meaning something other than pizza by the slice) outside the usual 1-3p.m. lunch hours and before the start of dinner at 7:30 or 8 p.m. A good example is the gourmet food court on the top floor of the San Lorenzo market. It's open until 10 p.m. or later, with stalls selling made-on-the-spot salads, cured meats and cheeses, pasta dishes etc. Waiters come around taking orders for beer and wine. After a long day on the train visiting Pisa and the incredibly over-touristed Cinque Terre, the four of arrived back in Florence, and ended up here instead of a restaurant. We had fun going off in all directions, picking out what we each wanted, then meeting up at a table to enjoy an elegant evening snack. 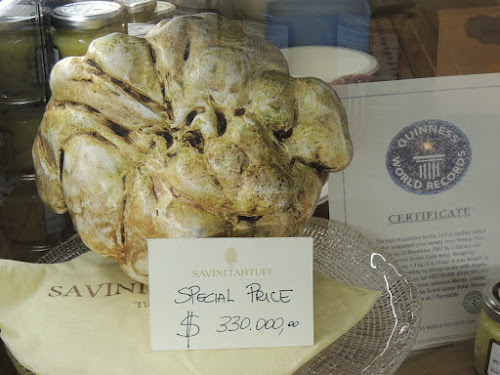 A very special price on a prized truffle 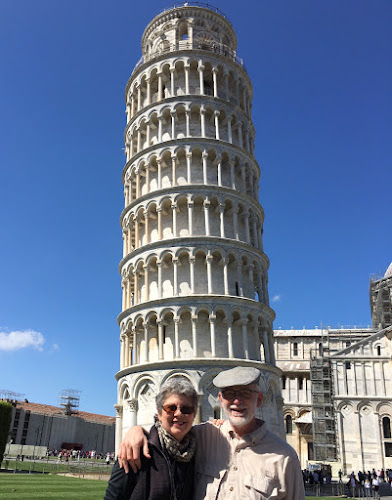 That's a wrap for the first three days of our latest Italian adventure. Onto Assisi, and then south to Matera, Apulia, Greci and Naples.
Posted by Carol Pucci at 11:06 PM