Under the Umbrian sun 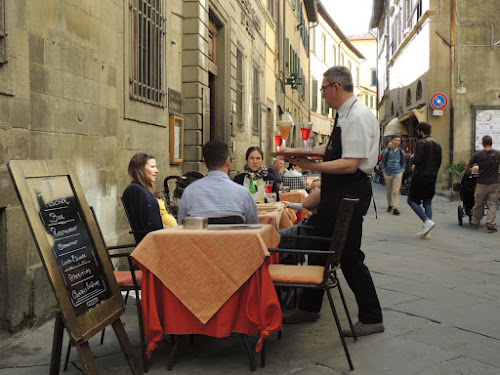 Lunchtime in Cortona
I love Italy's train system, but for getting around to small towns, there's nothing like having car. We picked ours' up this morning in Florence, and stopped in the medieval Tuscan hill town of Cortona on the way to Assisi. Cortona is a pretty hill town made famous by Frances Mayes’ bestseller, Under the Tuscan Sun, which was later made into a film. Artisans, well-kept parks and squares, historical sites and beautifully-preserved medieval architecture keep the town alive. Yes, there are bus loads of tourists and student groups, but we managed to arrive for lunch just about the time most of the groups were leaving. Tiny restaurants such as the 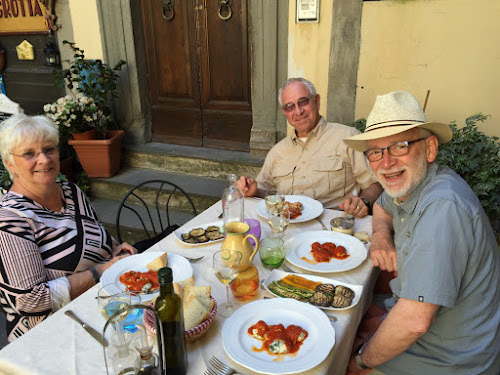 Trattoria La Grotta, tucked into a courtyard off the Plaza de la Republica, can't accommodate big crowds. Anticipating a special dinner later at the agriturismo in Assisi where we'll be staying for two nights, we shared portions of a ricotta and spinach gnocchi with tomato sauce and a platter of grilled eggplant, peppers and zucchini. Splitting dishes seems to be acceptable these days, as does ordering "out of order,'' meaning you can have just a salad (normally served at the end of the meal), or only a pasta dish, traditionally a first-course. One of the most valuable words I learned in an Italian class last year was "condividere," to share. 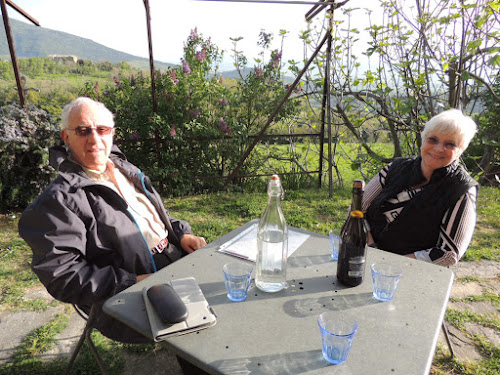 Under the Umbrian sun in Assisi 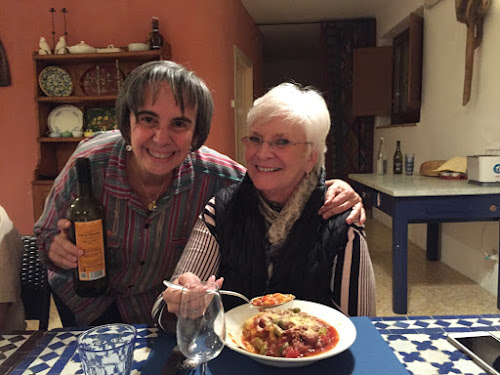 Tuscany gets a lot of attention, but I like Umbria, the province next door. It's just as beautiful and bountiful, but less known than Tuscany, especially among Americans. We're staying at Alla Madonna del Piatto, a farmhouse B&B near Assisi. Many in Seattle, Portland and Palm Springs are now familiar with Letizia Mattiacci, author of the cookbook, "A Kitchen with a View," and owner of the Alla Madonna Del Piato. Letizia was in Seattle earlier this year, doing cooking classes, giving talks and promoting her book which will be available at the Cafe Umbria in Pioneer Square as well as on Amazon.com etc. Letizia and her Dutch husband, Ruurd de Jong, gave up careers as entomologists to buy and renovate the abandoned farmhouse built centuries ago as a refuge for shepherds. Tom and I first met them 12 years ago when the inn was just a year old, and I was doing a story for The Seattle Times travel section. Tonight we, along with Al and Nancy (my sister-in-law pictured here), had a family dinner with Letizia, Ruurd and their daughter, Tea. Letizia called it a "simple'' meal, but it was fantastic, starting with Pane carasau, a Sardinian crisply flat bread baked twice, accompanied by an artichoke and lemon salad with toasted almonds. The main course was a creamy polenta, stone ground on an antique mill, and served with tomato sauce and asparagus. Dessert was home-made ice cream with caramelized figs and her house-made elderflower liquor. Letizia gives cooking classes here in Assisi. Need I say more?

Alla Madonna sits on a hill overlooking Assisi and its major site, the Basilica of Saint Francis. St. Francis was born in Assisi in 1182, and construction on the basilica began two years after his death in 1228. Between the end of the 13th century and beginning of the 14th, the basilica's walls were frescoed by some of the best-known artists of the time. The first time we visited Assisi, we spent several days exploring the town, iits museums and backstreets. We only had about a half-day this time, enough to walk the length of the town and visit the basilica 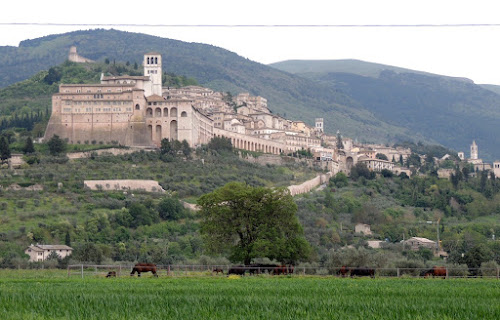 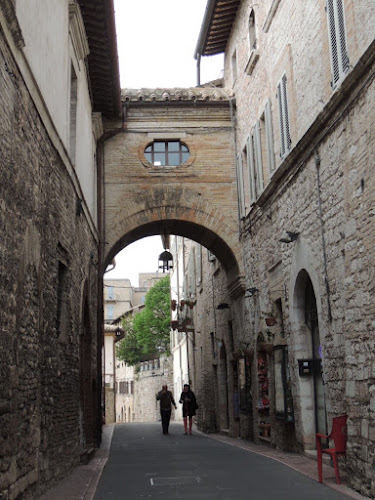 Assisi is Umbria's most well-known hill town, but there are many others. We spent the morning visiting Gubbio, an hour's drive into the mountains. Like Asssi, it's a well-preserved medieval town, with many 14th and 15th century houses scattered up the hillside on either side of steep alleyways. An elevator connects the lower levels of the town to the upper. A funicular takes people two at a time in small cages to the top of a mountain where there's a church, and it's possible to hike to a castle. 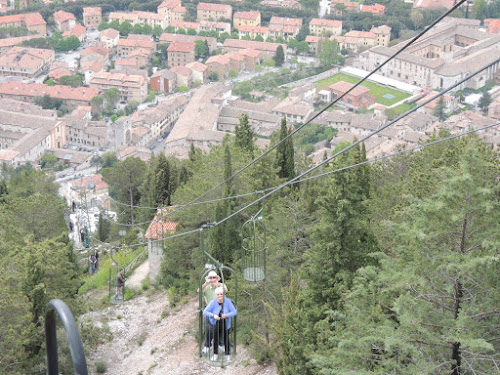 Gubbio is the location where Saint Francis of Assisi met the wolf, probably the metaphor of an outlaw that was converted to Christianity and reconciled with the citizens of the town by the saint. We visited here on 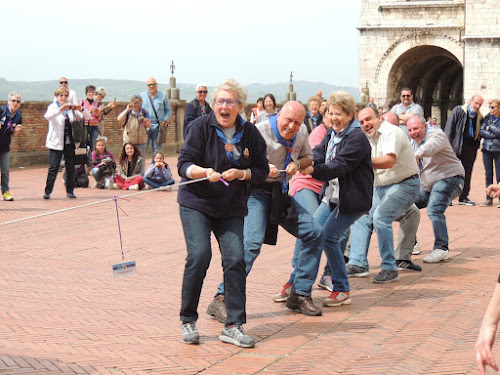 a Sunday, always a good day to soak up the local culture in Italy. Two teams competing in a tug-of-war drew crowds of cheerleaders on the main piazza. Reservations for Sunday lunch at good restaurants are a good idea, since many close in the evening. The one recommended to us was booked, so we decided to take our chances, and see what we might find on our drive back to Assisi. We settled for the Italian equivalent of a truck stop called the "Pit Stop," similar to the famous Auto Grills scattered along the exits of most Italian freeways. Places like the Pit Stop and the Auto Grill chain serve the gourmet equivalent of fast food, aimed at discerning Italian motorists and truckers. We ordered tuna salads - big bowls of greens sprinkled with big chunks of tuna, anchovies, whole green olives, hard boiled eggs, tomatoes. With wine, bread and a cappuccino, the meal was a bargain at about $17 for two. 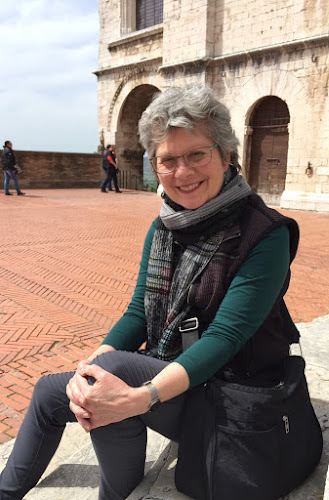