A visit to Greci, the town where my grandfather was born 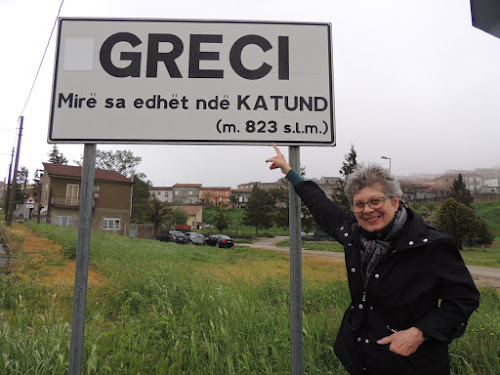 This sign says "Welcome to our town'' in Arbëreshë, the Albanian-Italian language spoken in Greci
It was a chilly, blustery, rainy Sunday in Greci, the town in Southern Italy's Avelino province where my Grandpa Pucci was born. Most everything (meaning the town's one bar, one pharmacy and two shops) was closed, and, unlike our first visit five years ago, we found few people out and about. Rita Diminno, the town's unofficial ambassador to American visitors, was gracious enough to welcome us into her home for a coffee and a visit. What a lovely town this is. Even lovelier are the people who live here - about 700 in all -including about 20 school-age children. The school stays open due to a special provision the Italian government makes for keeping the Arbëreshë language and culture alive.
"As you're driving in, you're driving on what used to be a shepherd's trail,'' I remembered someone telling me. The road is paved, but it still takes about a half-hour of steep driving, winding through the hills to reach it from Ariano Irpino, the nearest town of any size.
My grandfather, Nicolas Pucci, was born here in 1901. His father, Leonardo, my great-grandfather, came to the United States as a young man in the early 1900s. His mother, my great-grandmother, Angiolina Panella, followed a few months later with my grandfather who was about two at the time. They settled in Canton, Ohio. The town offered good job opportunities in construction and in the brick factories. Many people still living there have family ties to Greci. 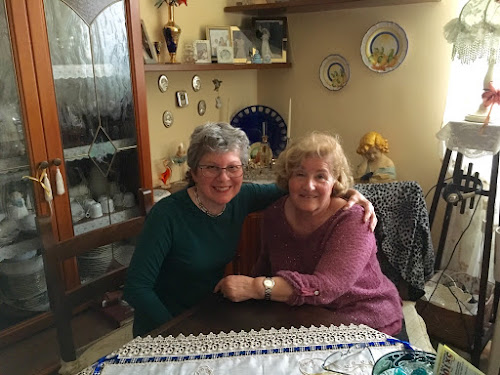 Rita and me at her home in Greci

There are dozens of small towns like this scattered on the hillsides of Southern Italy, but Greci stands out because it's one of 51 towns in Italy settled by Albanians between the 15th and 18th centuries. The communities call themselves "Arbereshe,'' and the people in these towns speak Albanian as well as Italian. The Pucci and Panella families and most others here are ancestors of Albanian soldiers who settled in Greci sometime in the mid-1400s. The King of Naples invited them to relocate after the Albanian military leader, Skanderbeg, answered a call to help the Italians defeat French-supported insurrections. Greci was originally settled by Greeks, then abandoned. The Albanian soldiers, seeking to escaping the Ottoman invasion of Albania, favored Greci because it was the highest town in the area and presumed safe. 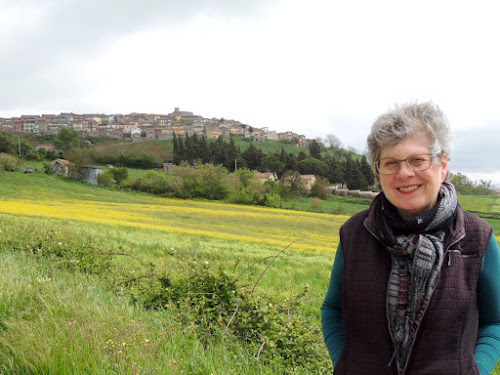 Greci in the background on a blustery April day

Rita was born in Greci, but grew up in Australia where her father, a shoemaker, moved the family to find work. The people in Greci, mainly farmers and shepherds, had little money. They bartered for most things which meant Rita's father couldn't muster the cash he needed to buy leather. Rita came back to Greci for a visit when she was 19, and met and later married her husband, Pino. They lived in Australia for a while, but eventually returned to Greci. Because they both speak English, they often greet visitors from the United States. Once upon a time Greci was a lively town with a cinema, shops, schools etc. Nearly 4000 people lived here in the early 1950s, around the time I was born. People from Naples now own many of the homes. They use them on weekends or in summer to escape the heat. Streets are well-kept, and many of the houses are painted in bright colors. 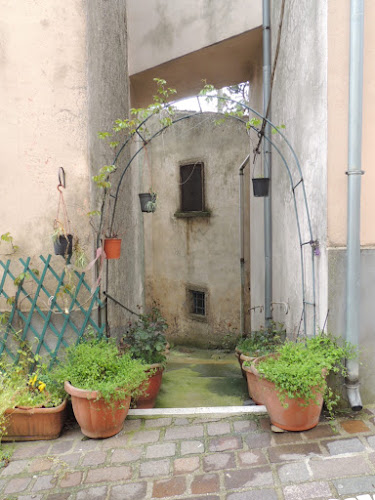 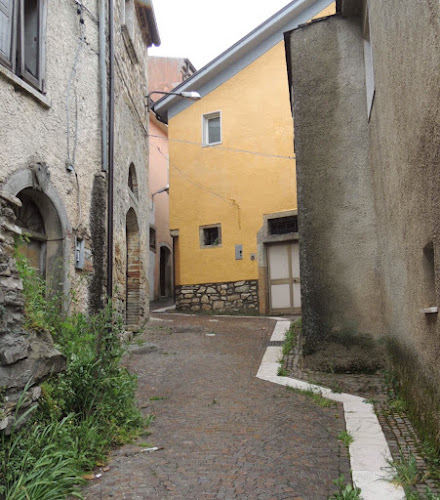 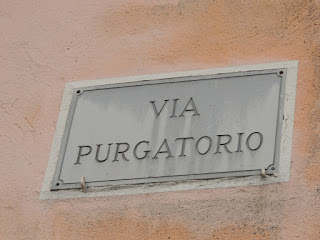 The sight marks a piazza where there once was a cemetery

Southern Italians are truly special people. If you've ever thought twice about visiting the town of your ancestors, don't hesitate, even if you don't know any direct relatives. Everyone will treat you as family. We met Maria Castielli and her husband, Dante Molinario, five years ago in Ariano Irpino near Greci. Maria's mother was born in Greci, but Maria grew up in England. Dante worked for a while in Toronto, so they both speak excellent English. 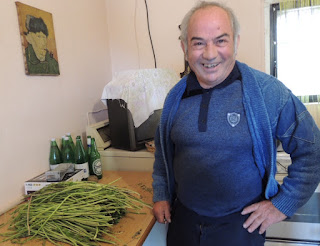 Dante and his wild asparagus 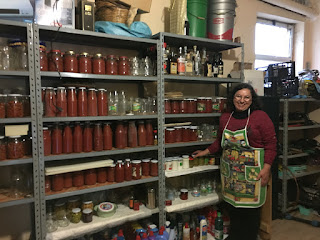 Maria in her pantry stocked with tomato sauce

They invited us all to their home for dinner last night. "Nothing special,'' they kept saying. Not true! Everything was very special. The prosciutto came from their own pigs which they kill each year. Dante cures the ham with salt and spices, and hangs it from the ceiling of a shed to age for two or three years. kill their own pigs every years, and He got up at 4 a.m. to pick the wild asparagus that went into a tasty frittata. 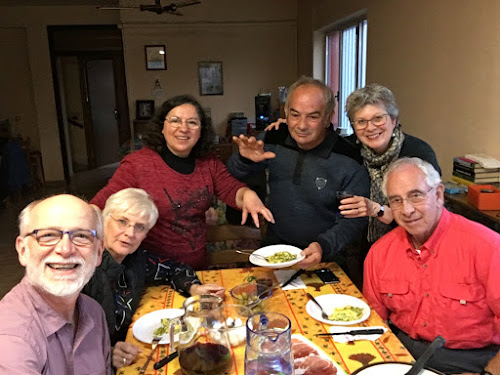 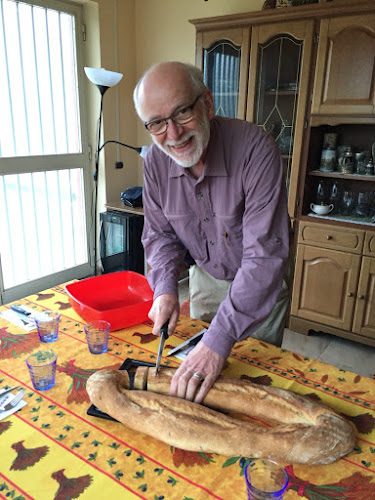 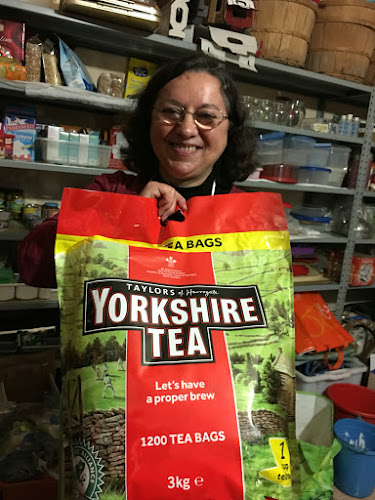 Maria misses a lot of things about living in England, but most especially tea. She can't find a good brand in Italy, so every once and a while, a friend sends a Costco-sized bag of Yorkshire - 1,200 tea bags! She was generous enough to share a few with us on a blustery day. 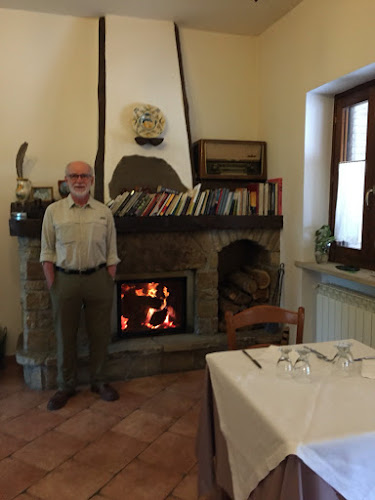 There are no hotels in Greci, so we stayed Agriturismo Regio Tratturo, about six miles from Greci. It's a very nice family-owned farm with a restaurant popular with locals. The four rooms are comfortable and spacious with modern en-suite bathrooms. Breakfast was a frittata, prosciutto, fresh bread, pancetta, three different freshly-baked pastries and coffee and tea served next to this cozy fireplace. Even though the restaurant is closed on Sunday evenings, they served us a wonderful dinner, starting with antipasti, followed by two types of pasta, beef with tomatoes, and for dessert, tiramisu in little shot glasses. The price for two was 140 euro for two nights lodging, two breakfasts and one dinner, averaging out to 70 euro per night, less than we paid for a room only everywhere else we stayed on our trip. 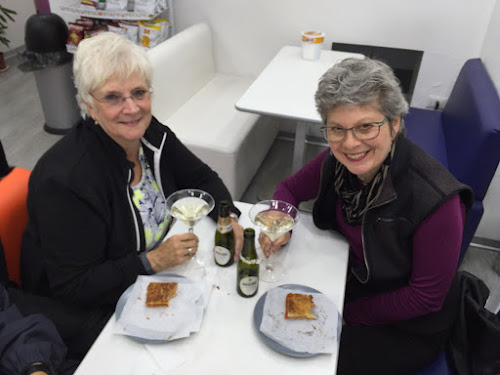