Up the down staircases in Genoa

Genoa is Italy’s sixth-largest city with stunning views of the Liguarian sea, a pedestrianized Medieval old town, great restaurants, museums and cafes, but it gets little attention in guidebooks. Most visit on a day trip from the Cinque Terre, on a cruise ship stop, or from one of the beach resorts less than an hour’s train ride away.

This is a good thing, if like us, you like mid-sized cities more than small towns. Fewer tourists mean less crowding, lower prices and more relaxed locals. And you can always day-trip in reverse. We reached the  coastal town of Nervi, above, known for its 2.2-mile cliff side walking path, in just 20 minutes by train. That left us plenty of time to get back to the city for the apertivo hour when the bars compete with each other for the best free spreads to go with the price of an Aperol sprtiz.

The Storico, across from the opera house, includes at least 15 items on its 12 euro afternoon special, including oysters, cheeses, meats, fish balls, risotto, a seafood cocktail, fruit and a mini-dessert. Its terrace faces the Piazza de Ferrari, the unofficial dividing line between 19th Genoa, with its arcaded shopping streets and monumental buildings, and the pedestrianized Medieval town of little shops tucked into narrow alleys called “creuze.”

Genoa was the main financial center of Italy in the 19th century. Bankers, merchants and princes adorned the city with palaces, churches and impressive art. Crammed into a thin sliver of land between the sea and mountains, Genoa was built up rather than out. Buildings are layered on top of each other, so that it’s not unusual today to see someone walking out of their house via the roof of another person’s apartment. Public transportation includes elevators and funiculars as well as buses and an underground metro.

We rode the Zecca-Righi funicular to a neighborhood about 1000 feet up. Walking back down was easy via a network of staircases and foot paths leading to streets with names such as Vico del Cioccolatte (Milk Chocolate alley) taken from commercial activities that once took place there. Our fitbits show us logging 14,000-17,000 steps per day most days!

We explored more on a walking tour with Spyros, a Greek guide who partners with Genoa’s hostels to lead pay-whatever-you-want strolls for anyone who signs up the day before.

Eight of us followed Spyros around for four hours, climbing staircases, riding the elevators and poking around the crueze where there might be a shop selling focaccia bread on one corner, and prostitutes sitting in doorways on the next. He pointed out buildings where windows on the third or fourth floors were painted in the trompe l’oeil style to look as if they had real shutters and window frames. This was supposedly to avoid a tax levied on the number of windows facing the street. Artists incorporated the style on the facades of many buildings in Liguria, including palaces and government buildings, as owners figured out they could save money by using paint instead of building materials to create an illusion that tricks the eye into thinking the bricks, marble columns or shutters are real. 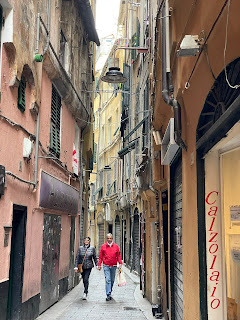 With Spyros, we walked to the top of San Lorenzo, Genoa’s cathedral, built in 1098. It houses the ashes of St. John the Baptist and the shell of an unexploded  bomb mistakenly shot into the church by the British during World War II.

When we booked our hotel, the Best Western Metropoli, we didn’t realize we were around the corner from the most elegant street in Genoa, Via Garibaldi, a pedestrianized UNESCO site lined with Palazzi del Rolli, palaces built by wealthy families in the 16th and 17th centuries. Most of the buildings are owned today by banks and other private businesses, but one, the Palazzo Lomellino, is still a private home, occupied by three generations of one family.  To pay for upkeep, they offer tours through rooms decorated with frescoes, commissioned by the original owners, depicting stories from mythology and religious events important to their families. “Rolli” means “list,” indicating that these homes were on a list of private accommodations deemed worthy of housing visiting nobility and government officials.

Back down at sea level, Genoa’s port incorporates a massive working waterfront, a portion of which has been renovated to include restaurants, museums and food shops. The city’s most exported food product is pesto, a green sauce made with basil, Parmesan, Pecorino, pine nuts and olive oil. It’s as important to Genoa as pizza is to Naples. Every restaurant serves it atop a short-rolled pasta called Trofie. We like pesto, but we make it all the time at home. More fun for us was a trip to the port for Genoa’s version of fish and chips - fried anchovies with tails left intact and chick pea fries served in a paper cone.