Torino: An Italian city offering culture and cuisine without the crowds

Long lines and high prices will greet visitors to Italy this summer and fall as tourists return in pre-pandemic numbers. Rome, Florence and Venice go to the list of top destinations for good reasons. But for those who can spare the time, second-tier cities offer opportunities to soak up Italian culture and cuisine without the crowds.

Turin or Torino in the Northern Italian Piedmont region, is a good example. A city of about one million In the foothills of the Alps, it was our last stop on a two-week trip just after Easter to test the overseas travel waters post-Covid.

Like Genoa, where we spent the previous four days, Torino gets little attention in guidebooks. Known today as the birthplace of the Fiat car, the Olivetti typewriter, vermouth and chocolate sold in bar form, the city holds a special place in Italian history as first capital after the country united as a nation in 1861. The honor eventually went to Florence and then Rome as Torino flourished as a financial center filled with opulent palazzi, huge squares and arcaded shopping areas built by wealthy nobility.

Old-fashioned trams, a good bus system and pedestrianized walkways made it easy to get around. And while the emphasis during Covid was to avoid contact with people as much as possible, the Torinese seem to making up for lost time by creating all sorts of ways for visitors to connect.

Sleeping with a local

We made a last-minute switch from an Airbnb to a regular bed and breakfast when I spotted the reviews for B&B D'Orso Poeta (The teddy bear poet), a two-room B&B in an elegant former palazzo a few blocks from the Porta Nuova train station. Nicoletta Stefano reopened in September in the third-floor apartment where she welcomes visitors from around the world.

Some might find it easier to stay in a hotel than keep track of five different keys to open four doors, but once inside, almost anyone would appreciate Nicoletta's attention to detail. Antique furnishings, framed artwork, Oriental-style rugs, a Nespresso coffee maker and well-stocked fridge made us feel like honored guests.

The price was $125 per night, about what we'd been paying for similar accommodations throughout the trip. One interesting change Nicoletta made due to Covid was to pivot from serving breakfast to a self-serve system. She filled the fridge with yogurt, milk, juice and fruit for guests to help themselves, and left croissants or bread in a bag on the table the night before. This way guests could either keep to themselves, or if they wanted, chat with her in Italian when she came over from her apartment next door to clean up. One morning we found a note on the counter saying she left a bottle of Prosecco for us to enjoy on our balcony. I like the Airbnb system, but I like B&Bs more because of the opportunity to connect with locals like Nicoletta.

I've been a fan of Eatwith.com for several years. Eatwith operates like the Airbnb of dining. Amateur cooks post their profiles on the website along with a proposed menu. Covid put most of these dinners on hold for more than a year, but now hosts are gradually returning.

Carlotta Muti, a professional tour guide and self-taught cook, offered a dinner in the apartment she shares with her boyfriend in Torino's historical center. We packed a few extra Covid tests in our carry-ons so that the three of us (her boyfriend had other plans) could test ourselves beforehand.

With the tests showing negative, we relaxed and sipped Prosecco along with an antipasti of local cheeses, meats, honey and a wine-infused jam. Carlotta disappeared into the kitchen, and came out with a dense, spinach flan which she served with a local red wine. Pasta with ground hazelnuts followed. Dessert was a hazelnut cake soaked with zabaglione, an Italian custard made with egg yokes and sugar. Carlotta is a fluent English speaker, so the conversation flowed easily. We especially enjoyed hearing about the annual American Thanksgiving dinner she hosts for friends, complete with pumpkin pie (Is it considered a sweet or savory dish, she wondered) and a Martha Stewart cheesecake.

Walking tours offered by Freetour.com, a worldwide network of enthusiastic local guides, provide an easy way to get the lay of the land in a new city. The tours generally run two-three hours. At the end, you tip the guide whatever you want - usually around 10 euro per person.

We signed up for an introductory Saturday walk around the city with Free Tour Turin, and then the next day, found a stroll titled "Historic Cafes and Chocolatiers"  offered by a local Airbnb host.

More than 100 people showed up for the Free Tour walk offered in Italian, Spanish and English. There were only eight English speakers in the crowd, so as the others gathered in two huge groups, we had what was essentially a private three-hour tour with our excellent English-speaking guide, Olivier Frasca.

Leaving the tourist office meeting point at the Porta Nuova train station, we strolled along the Via Roma, a 16th century gateway into the old city that traverses three major squares and hosts two churches near a building that was the former German Gestapo headquarters during the World War II.

From here we got our first glimpse of Torino's more than 11 miles of arcaded streets, many housing high-fashion boutiques and historic cafes. I liked the way Oliver interspersed stops at historical landmarks (the former Parliament building, Royal Palace, Egyptian Museum, the Cathedral housing the Shroud of Turin) with the best places to sample gelato and sip Bicerin, Torino's signature coffee drink made by layering hot chocolate, coffee and cream in a glass.

Paolo Rapa, an Airbnb host, designed a three-hour chocolate and coffee tour which he offers for $22 per person on Airbnb's Turin site under a category called "Experiences."  I e-mailed Rapa to see if he was available on a Sunday. He answered back, and we arranged to meet the next day at 10 a.m.

Our first stop was the Caffe Torinio in the Piazza San Carlo. It's considered good luck to rub your foot over a brass plaque of a bull (Torino means little bull in Italian) on the pavement outside. Inside, you can have a coffee at the non-touristic price of around $1.50.

Torino is known for its chocolates combined with local hazelnuts, a tradition started with the first production of chocolate bars in the mid 1800s when artisans, facing a shortage of cocoa, began stretching the supply by mixing it with the local hazelnuts. The taste is familiar in the popular chocolate spread, Nutella, produced nearby in Ferraro.

Before then, chocolate was enjoyed as a liquid after it was first introduced by the Duke of Savoy in 1559. That custom continues with Bicerin, the drink of coffee, hot chocolate and milk, originally served separately, then mixed by the customer.

The Cafe Al Bicerin, the bar that invented the drink, sits across from the Church of the Virgin of the Consolation. Parishioners would come in and order Bicerin for sustenance during fasting periods.
Today, baristas layer the chocolate, coffee and cream together in one glass, with strict instructions not to mix or stir.

For all of those calling for more aperitivo pictures, here are two from one of the best places we found on the trip. Dozens of bars on the Piazza Vittorio Veneto serve a spread of small plates and appetizers along with the price of a drink ($10-$12) starting around 5 p.m. The aperitivo hour is popular all over Italy today, but it actually originated in Milan and Turin in the 1920s when workers would end their day with a pre-dinner drink. The two cities still compete to offer the best. 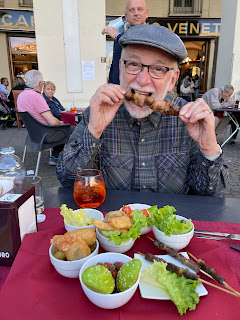 That's a wrap on our first trip back to Italy after Covid. Ciao for now!