Porto, Bilbao and other stops along the way to post-pandemic overseas travel 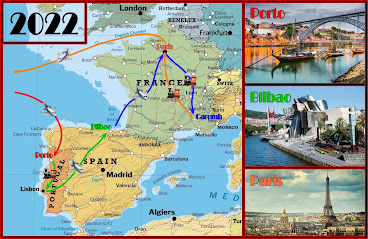 Despite nagging uncertainties about Covid, tales of crowded airports, lost bags and high prices, strategic planning may be all the travel insurance you need for successful overseas travel this fall.

That's what I'm finding as Tom and I put finishing touches on our second European post-pandemic trip this year, this time to Porto in Portugal; Bilbao in Spain; a few days with friends at their rental house in southeastern France; and some time in Paris.

This is what I call  "tame" travel, nothing complicated and no third-world destinations. That saddens me a little since our last trips before Covid were to Egypt, Uzbekistan and Myanmar. There will come a time for more adventuresome travel again, but Covid is still with us no matter how hard we'd like to wish it away. So for now, we're sticking to areas that carry fewer risks, making no non-refundable upfront payments, and honing in on new cities and experiences while avoiding crowds and crowded airports.

We've been to Portugal only once, and to Spain a few times, but never to Porto, the transportation hub of the wine trade for which port wine got its name. Harry Potter author J.K. Rowling lived here between 1991 and 1993, inspired by visits to the Lello bookstore and Majestic Cafe. Also new to us is Bilbao, the urban, riverside hub of Basque country, a culturally unique area between southern France and Spain.

When it comes to avoiding the hassles of major airports and tourist crowds, flying directly into  a smaller city is always a good move. Many are surprised to find that this is fairly easy to do from the U.S., given the availability of non-stops to European hubs such as Amsterdam, with onward connections to cities such as Florence in Italy instead of Rome or Milan, or in our cases, Porto instead of Lisbon.

No need for travel insurance to cover the airfare because it can be cancelled or changed without penalty, a policy most airlines instituted during Covid, and so far have not walked back.

Finding accommodations with liberal cancellation policies has also been easy.

Since Covid, Airbnb has convinced most of its owners to offer fully refundable bookings within a few days of arrival.

For our first three nights in Porto, we booked a lovely studio with a balcony overlooking Rua das Flores, a pedestrian street lined with 17-19th century buildings that once housed wealthy merchants. The price was a reasonable $125 per night, refundable up to five days ahead.

The same policy applies to an $85-a-night Airbnb apartment we rented in Pinhao, the center of the port wine trade in the rural Douro River Valley, and  a six-room B&B ($110) back in Porto's Riberia historic district booked for our last three nights.

Also changeable and refundable (for a credit) were our flights to Bilbao and Paris purchased online on Vueling Airlines, a low-cost Spanish airline.

With all the talk about inflation in Europe, American travelers may not find prices as high as expected, due to the strong dollar, now one-to-one with the euro.

The one place we did encounter sticker shock was in first-tier Paris where the price of the hotel room I booked in 2019 went up from $90 to $150. We could have looked harder, or just paid the price. But since we'd been thinking about taking a bike tour around Versailles, a wealthy suburb that King Louis X1V made the French capital from 1682 to 1789, we pivoted to a homey B&B there instead for $110 with breakfast.

Putting together your own trip vs. taking an organized tour is more work, of course, but the rewards are independence and flexibility. Still, it's often easier to rely on someone else for short excursions that involve complicated transportation logistics or having a car.

For these types of day trips I turn to "GetYourGuide," a Berlin-based online travel agency and marketplace for excursions offered by tour companies worldwide. There's no advance payment, and cancellations are generally allowed 24-48 hours before departure.

It's here I found a day trip from Porto by mini-van ($90 each) to the Paiva Walkways, a four-mile boardwalk zig-zagging through a geopark on the the left bank of Paiva river. It also includes a side trip to the   516 Arouca Bridge, a 1,692-foot metal suspension bridge suspended 576 feet above the water; lunch; and a boat ride along the canals of the nearby town of Averio. The tour company observes Covid precautions such as requiring passengers to wear masks, and takes half the usual number of people in its vans.

A similar excursion in Bilbao ($60 each) will take us to the island of Gaztelugatxe where a 10th-century hermitage is connected to the mainland by a bridge and 240 stairs. Some will recognize it as the island fortress of “Dragonstone” from season 7 of Game of Thrones.

Many Airbnb hosts offer activities such as bike trips and food tours. Filter for "experiences" to see what's offered in various cities. Eatwith.com offers opportunities to dine in the homes of locals. Sadly, we'll miss the chance for a traditional salt cod dinner in Porto because the Portuguese/Serbian hosts will be on vacation.

Some independent travelers hire private guides, but for my money,  free group walking tours offered through websites such as Freetour.com and GuruWalk, are just as informative, and often more fun. The upbeat guides are often knowledgeable students or professors who work for tips. In Porto, we signed up for two free city walks offered by Porto Walkers which also offers paid port wine and food tours.

in Bilbao, Freetour's 2.5-hour walk includes recommendations on where to sample the best traditional and modern “pintxos,” the Basque version of Spanish tapas.  Susana, a guide from GuruWalk who describes herself as someone with a "Greek passport and Basque heart," leads small groups through Bilbao la Vieja, a former industrial area which she calls the Soho of Bilbao.

We couldn't decide which of the walks to do, but the price was right, so we signed up for both.