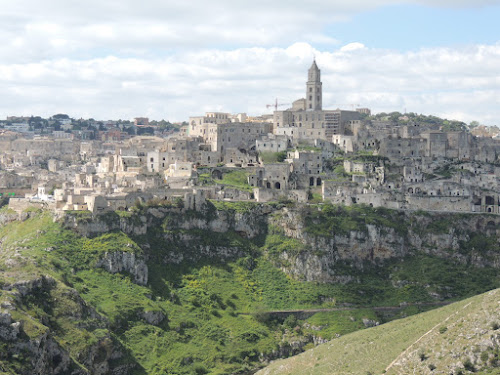 The Sassi of Matera

Perched on the edge of a deep ravine, modern Matera, a bustling 17th century town with Baroque buildings, shops and cafes, reveals its major tourist attraction only to those who step to the edge, and look out over Sasso Caveoso and Sasso Barisano, two "cave'' neighborhoods spread out below on the slopes of a deep, rocky ravine. 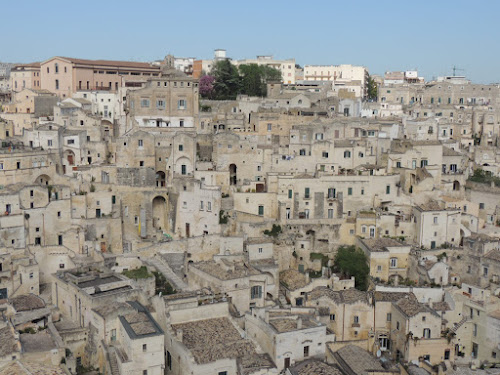 Dug into the stone cliffs below are hundreds of sand-colored caverns (Sassi in Italian) carved out of soft volcanic tufa stone, some with built-up brick fronts and elaborate facades and doorways that make them hard to distinguish from ordinary houses. Layered one on top of the other so that the terraces of some are roofs for others, they're connected not by real streets but by a maze of winding stone passageways starting a few steps away from the edges of the upper town. 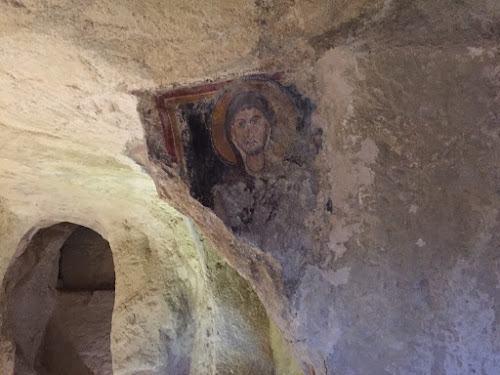 Life in the caves, originally dug out by torrents of water, dates back 9,000 years to prehistoric times, making Matera one of the oldest cities in the world. From the eighth to the 13th century, monks used them as refuges, digging out tiny chapels and elaborate churches, leaving behind delicate frescos. Later, whole neighborhoods evolved as cave dwellings were built out to become shops and homes with intricate hydraulic systems to keep the water fresh and cool year-round. Healthy and prosperous for a time, the Sassi began to decay as the new town above developed, Much of the Sassi became homes for poor peasants who used the churches and other dwellings for homes, barns and stables. Finally, about 17,00 residents, mostly poor peasant farmers, were forced by the government to evacuate in the early 1950s after Italian artist and writer Carlo Levi published an account of the squalid living conditions in his book "Christ stopped at Eboli." 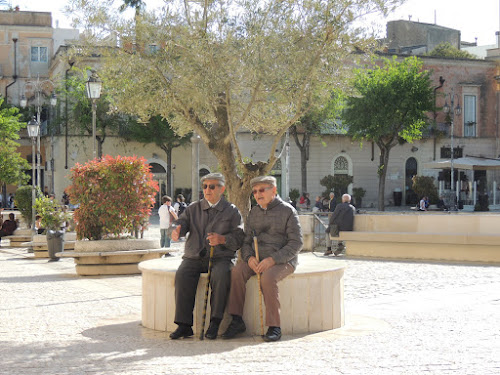 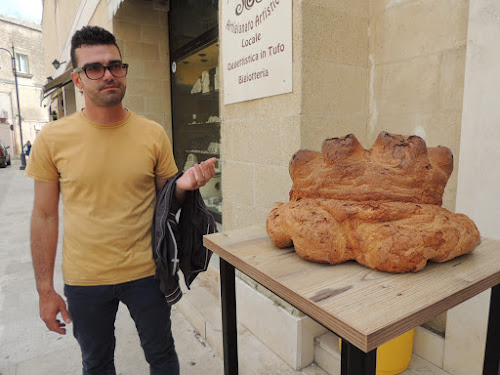 Today, Matera in the southern Italian region of Basilicata, between Calabria and Puglia, is a Unesco world heritage site and a tourist attraction designated the European Capital of Culture for 2019. The city's population is 60,000, with about 3,000 people living in the sassi. Hotels, restaurants, wine bars, and several companies occupy the ancient cave dwellings. Locals don't always agree about the various new uses, but Matera's revival has been an economic boost to one of Italy's poorest regions. Estimates are about half the dwelling have been renovated, either through private ownership or through a lease arrangement with the government which owns most of the Sassi dwellings. Antonio Manicone, 33, above, our guide on a two-hour walking tour, was born in Matera and went to school in Tuscany. There was a a time when almost no young person would return here to work, he said, but tourism has changed that. Both of his grandmothers once lived in the Sassi, but have no desire to return, even to look at the changes. At the time, almost everyone brought bread dough to be backed in a communal oven. Matera is still famous for the bread - large, knobby loaves shaped to fit as many in the ovens as possible and last for more than a week. As a teenager, Antonio said he and his friends used to come here to hang out in the Sassi, and stake out abandoned dwellings as private "party houses." 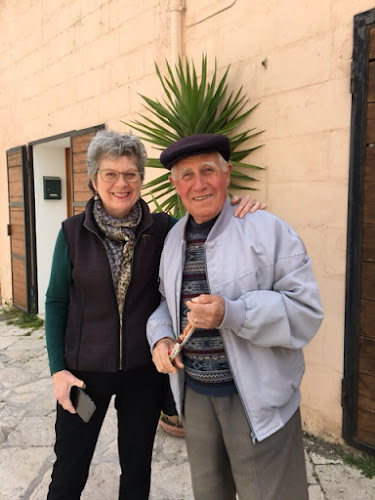 It's easy to meet locals who remember what life was like in the Sassi. This man approached us while we were standing on the street corner. It helps that I speak a little Italian. He volunteered that he was born in the Sassi, then walked me down the street to show me some hidden carvings on the front of a stone church. 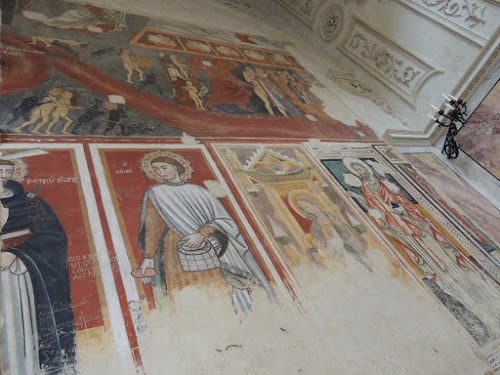 The Matera cathedral was built in Apulian Romanesque style in the 13th century on the ridge that forms the highest point of the city of Matera and divides the two Sassi. It was closed for the past 12 years for restoration, and just reopened a few weeks ago. The frescoes above are original, but most of the interior of the church was redone in the Baroque style. 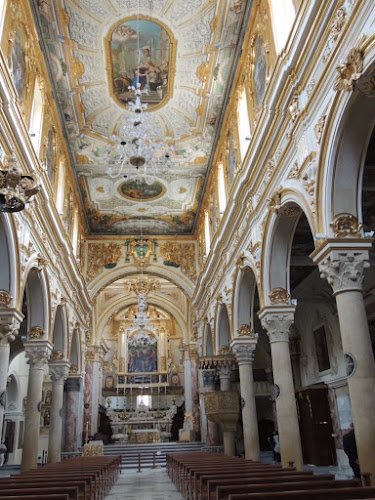 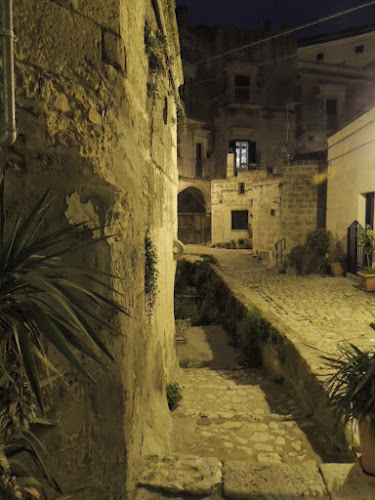 Our "street'' in Matera 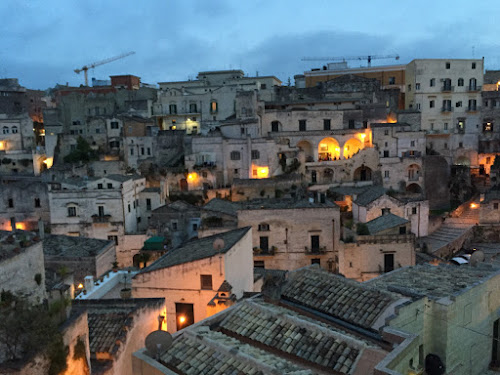 Nighttime view from our room 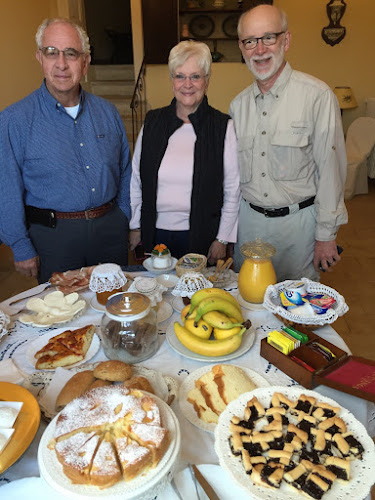 We're staying at Casa Di Ele, a small B&B with rooms that overlook the Sassi Caveoso. The owners are a musical family. Tina teaches music. Giuseppe teaches bassoon and their son, Raffale is a student at the Conservatory of Matera. The four rooms and two suites are named after musicians such as Mozart,Verdi, Bach and Pucinni. We're paying 98 euros per night which includes breakfast served in the family home next door, a 17th century building that belonged to Giuseppe's parents. Giuseppe serves the breakfast, and Tina bakes before she goes to work. On the table today were blueberry pastries and slices of lemon cake along with prosciutto, yogurt, juice, a special crusty bread for which Matera is known and little dishes of sweet ricotta cheese and fig compote. 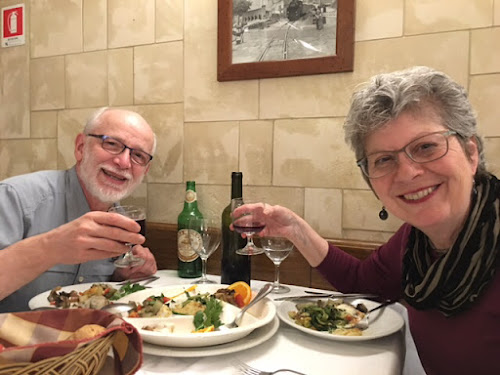 Trattoria Lucana
Mel Gibson scouted the world for a place that looked like ancient Jerusalem when he filmed "The Passion of the Christ," and settled on the sassi. He recruited locals as extras and ate nightly at Antica Trattoria Lucana, where fettuccine alla Mel Gibson is still on the menu. Movies continue to be made in Matera. Everyone is 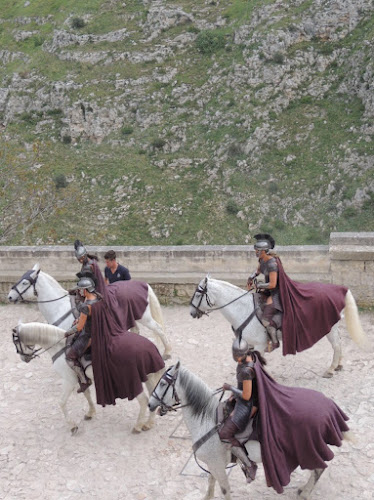 Looking forward to a new release of Ben Hur which was filmed here last year. Above is a scene from a new Wonder Woman movie that was being filmed while we were visiting. 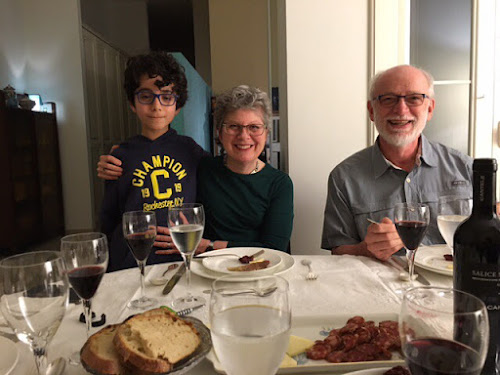 The highlight of our visit to Matera was dinner with the the Marano family, Bruno, 11; Francesco, 58, a professor of anthropology at the local university; and his wife, Angela Pistoia, 45, an excellent cook and caring mother. We arranged the dinner through an online website called Meal Sharing that pairs travelers with locals willing to host a meal in their home. The hosts set the cost - usually $20-$25 a person including drinks - and they send a proposed menu in advance. Francesco met us in the square next to our B&B. We walked from there to their home on the second floor of a building in town. We chatted in a living room lined with bookshelves while Angela put finishing touches on the meal. The dining room table was set with linens and silver. Soon a platter of antipasti appeared - local sausages, cheese and sun-dried tomatoes. Angela followed this with bowls of pasta with mushrooms and sausage and servings of zucchini parmigiana. Next came a salad with fennel and oranges, then fresh strawberries and a beautiful homemade cassata, a Southern Italian layered sponge cake made with ricotta and candied peels. Francesco served his homemade mandarin orange liqueur, made with oranges grown on property the family owns near Sorrento. 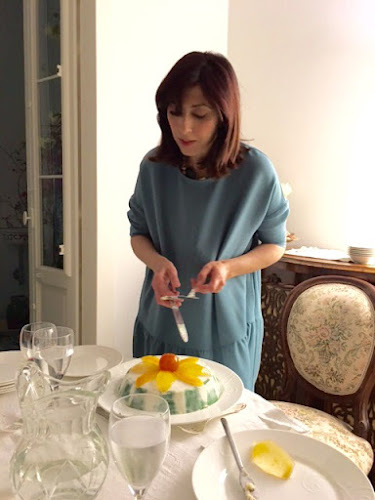 Angela and her cassata 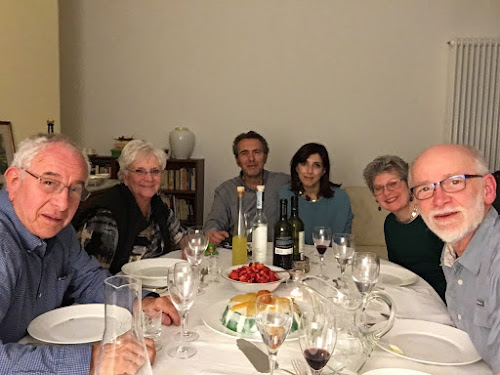 The meal was incredible, but what we enjoyed even more was the chance to spend the evening with this family. I think they enjoyed it too, since we were their first guests. It would have been nice if I could speak better Italian, but we managed, As an anthropologist, Francesco is interested in the way food intersects with local culture. He is writing a book on the subject which will be translated into English. I can't wait to read it.